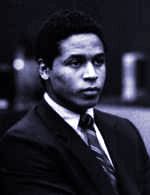 Members of the San Diego Committee Against Police Brutality (CAPB) and ­Workers World Party remembered the legacy of Sagon Penn on Aug. 18 as part of their local Black August Observance.

On March 31, 1985, Penn, a 23-year-old African-American man and other passengers riding in his truck were racially profiled as gang members by San Diego police officers Donovan Jacobs and Tom Riggs — despite no history of gang involvement by any of the young men. “I’m going to stop a truckload of Crips,” Riggs radioed.

Addressing Penn with the provocative greeting, “What’s up, Blood?” the officers asked Penn for his ID. Penn gave them his entire wallet. The officers returned his wallet and told him to remove his ID. Penn complied with their demands while asking what the problem was. As the story goes, the officers subsequently began to beat Penn, a martial arts expert. Jacobs punched Penn while Riggs kicked Penn and beat him with a baton.

Blocking some of the blows, Penn defended himself, got ahold of Jacobs’ revolver, fatally shooting Jacobs and injuring Riggs and their ride-along passenger. Subsequently charged with manslaughter and murder, Penn was found not guilty in two trials. The jury deadlocked 11-1 in favor of Penn for the involuntary manslaughter charge.

Despite his acquittals, Penn became persona non grata with the San Diego prosecutors and police agencies. For the next 17 years, Sagon Penn dealt with their constant harassment. Stating he “couldn’t have a life,” Penn committed suicide on July 4, 2002.

For many Black San Diegans, people of color and other progressive communities, Penn is remembered as a martyr of international importance. He was a child of the Civil Rights and Black Power movements here. His family members were stalwarts in the struggle for Black Liberation. As the public rallied in defense of Sagon Penn, his case brought over two decades of Black Liberation struggles in San Diego full-circle.

The economy of San Diego is vastly different than that of Los Angeles and San Francisco. Since World War II, and following the collapse of the cannery industry, San Diego lacked an industrial base. Instead, real estate speculation, private investment firms, military contracting and tourism have historically defined San Diego’s economy. In recent decades, biotechnology has also made its mark. With the exception of the military’s enlisted ranks, the economy of San Diego has been historically structured with little to no regard for Black labor or life.

Under these conditions, the police became a containing force for all of Black San Diego. This has brought meaning to all elements of grassroots mobilization. Central to the National Question and Liberation of Black and Brown San Diegans, struggles against police brutality and biased policing have informed campaigns over housing, employment, education, immigration and even anti-apartheid solidarity.

In 1963, Black San Diegans organized a branch of the Afro-American Association, a proto-Black Power organization that influenced the formation of the Us Organization and the Black Panther Party in later years.

The next year, younger affiliates of the AAA and a new Black Power organization, the Black Conference (which included University of California-San Diego graduate student Angela Davis), organized the first solely anti-police brutality group in the city, the Citizens Patrol Against Police Brutality.

Following the lead of the Citizens Alert Patrol in Los Angeles, the CPAPB followed squad cars, observed arrests, informed the public of their rights and participated in Black consciousness-raising efforts. The CPAPB and young members of the Black Conference eventually formed the San Diego chapter of the Us Organization by early 1967. One of its members was the longtime activist Vernon Sukumu, who served as head of the Sagon Penn Defense Committee 20 years later.

Committee Against Police Brutality in action in San Diego

From the late 1960s through the 1980s, anti-police brutality efforts united Black and Brown residents and fueled every moment of the Black Liberation struggle. The 1975 death of Puerto Rican youth Tato Rivera in National City and the 1978 killing of Tyrone Thomas by San Diego police conjoined African Liberation struggles and immigration struggles for local Black and Chicanx organizations. News of the Penn case reached as far as South Africa and garnered the support of a number of activists, athletes and entertainers.

Formed in August 1999, the San Diego Committee Against Police Brutality followed in this tradition, especially in four important cases: the Sagon Penn case, the 1999 death of former National Football League linebacker Demetrius Dubose, the 2003 death of Billye Venable and the death of Victor Ortega in 2004. With evidence of state targeting of Black and Brown people, evidence of witness and jury tampering, lying under oath and collusion between the court and the police agencies, these four cases underscore the need for the CAPB.