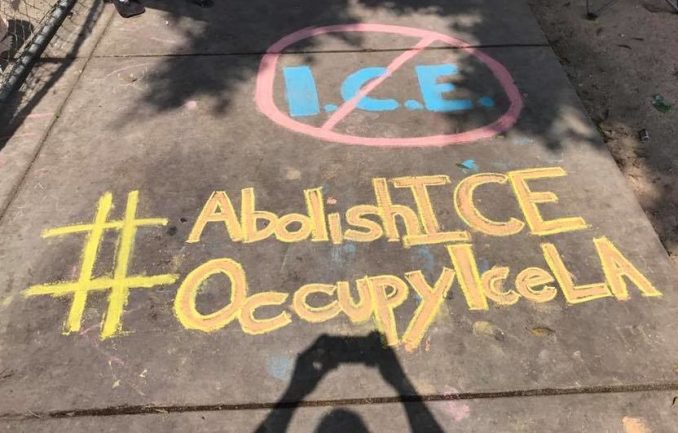 Occupy ICE (Immigration and Customs Enforcement) held an encampment at the Metropolitan Detention Center in Los Angeles throughout July and August to raise awareness about a list of demands drafted by members of the encampment. Occupy ICE LA’s statement reads in part: “We stand in solidarity with our immigrant, undocumented, migrant, refugee communities, and all victims of state violence. We believe in community safety and taking care of one another. Our goal is to uplift and support the work of the immigration and racial justice organizations that have been in this fight. We call for the abolition of the private prison industry. We call for the abolishment of prisons, immigration detention centers, and the abolishment of ICE.” (More information is available at occupyicela.org.)

A weekly vigil is held at a memorial in front of one MDC entrance. On day 50, earlier in August, the American Indian Movement of Southern California hosted the vigil. Several AIM members spoke in solidarity with the encampment, which AIM members were involved in organizing and have since participated in. Speakers from other organizations spoke as well; Workers World Party attended in solidarity.

The Black Alliance for Just Immigration has also held events at the MDC in resistance to Trump’s racist immigration policies. BAJI organized a press conference earlier this month demanding the private prison corporation, GEO Group Inc., be shut down. Trump’s immigration policies target Black im/migrants and refugees when the reality is that Black and Brown people are fleeing from U.S.-backed wars and imperialist aggression in Central America.

The BAJI press conference denounced the inhumane policies that rip Black im/migrant and refugee families apart at detention centers and through deportations. ICE repression was linked to police targeting Black and Brown communities for mass incarceration and racist state violence.

The demands from the encampment resound: No one is illegal on stolen land! Close the detention centers now! Abolish ICE, the police and the Pentagon!