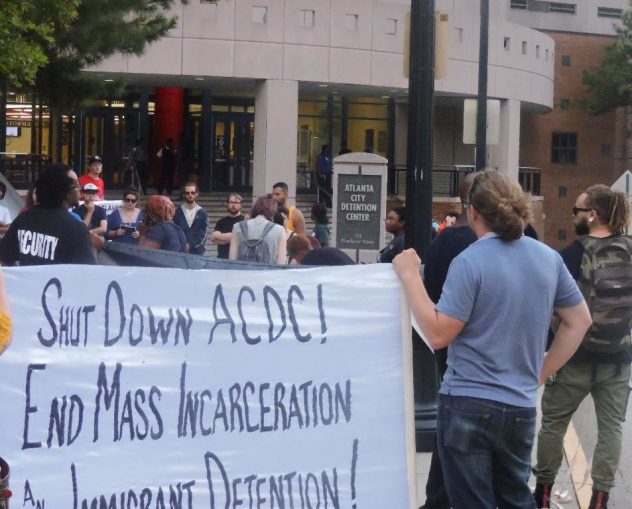 About 60 people demonstrated in front of the Atlanta City Detention Center on Aug. 21 in solidarity with the nationwide prison strike called to begin that day and last until Sept. 9. They offered solace to people locked up in ACDC.

Their voices projected by a large speaker pointing toward the cell doors, people recited poetry, played drums and called out to let the inmates know they had not been forgotten — which the severe isolation of prison can drive many to feel.

Dark figures could be seen in the illuminated window slits from which prisoners peered out. Several inmates waved to the crowd outside, which waved back. The prisoners appeared relieved to have the monotony and pain of their seclusion broken up, but their captors wasted little time erecting barricades in front of the entrance.

However, this had no effect on the demonstrators, who directed their attention to the slits of light in the cell doors seen going up the building.

According to Kevin Caron, a local organizer for A World Without Police and Georgia Detention Watch at the rally: “ACDC was built in preparation for the ’96 Olympics and has always been used by the city to lock away those the ruling class deems undesirable. This includes poor, mostly Black folks who are homeless, as well as others who violate city ordinances for engaging in survival economies like sex work and the use or sale of illegal substances.”

ACDC also holds immigrants for Immigration and Customs Enforcement (ICE) — an arrangement that generates $78 per person each day for the city’s coffers.

The rally was organized by the Atlanta Prison Strike Solidarity Committee, which includes Women on the Rise, Workers World Party, the Industrial Workers of the World, A World Without Police, Anarchist Black Cross and several community members. Other participating organizations included the Malcolm X Grassroots Movement, Street Groomers, the Party for Socialism and Liberation, the Black Alliance for Just Immigration and Southerners On New Ground.

Thanks in part to years of hard work by organizations such as Women on the Rise and Georgia Detention Watch, the city has been under pressure to shut down ACDC, which has seen a significant decrease in the number of detainees.

The Atlanta Prison Strike Solidarity Committee is also planning other events for the duration of the strike to spread awareness of the prisoners’ struggle and encourage outside pressure in the form of boycotts and demonstrations.

Shut down ACDC! Tear down the walls!