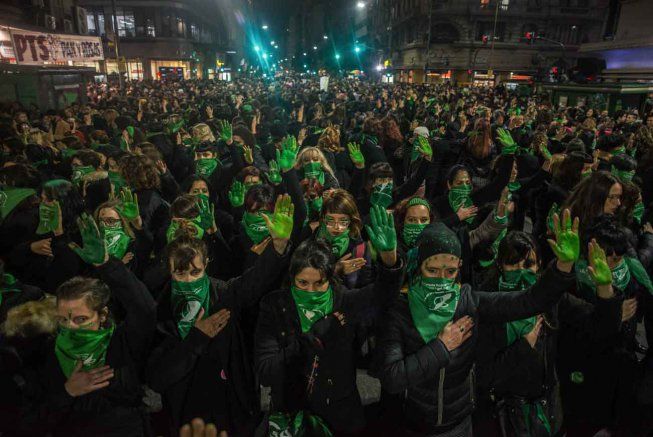 Tens of thousands of mostly young women have been in the streets of Argentina for the
legalization of abortion.

Women in Argentina may have lost a vote for the right to abortion on Aug. 9, but they are undaunted. They are not intimidated or afraid. They are angry. They are determined. They are optimistic. With renewed energy, they say they will keep on organizing until they win this fundamental right.

The current struggle is for legalization of elective abortions up to the 14th week of pregnancy; 62 percent of the population supports reform. The lower house of the Argentinian Congress had passed such a law on June 14, in response to the mass movement. However, the more conservative Senate narrowly defeated legalization on Aug. 9 with a 38-31 vote; two senators abstained. The majority of “no” votes were cast by men over the age of 50.

The vote left in place an archaic law enacted in 1921, penalizing women who have abortions and doctors who perform them with up to four-year prison sentences. Legal abortions are only allowed where a pregnancy results from rape or if a woman’s life is in danger — but these are nearly impossible to obtain, especially by poor, rural and Indigenous women.

Hundreds of thousands of women, especially youth, have been out in the streets demanding legal abortion for many months. There is optimism that women will ultimately be victorious because the women’s movement has mushroomed in size and strength, winning activists all over Argentina.

For 16 hours, throughout the Senate debate and vote, tens of thousands of women gathered in bitter cold outside Congress Palace in Buenos Aires.

Protesting the vote’s result, women demonstrated there and around the country. Despite their disappointment, women know they were close to winning, that they have momentum on their side and that change is coming.

Even former President Cristina Fernandez, now a senator, who had opposed abortion, was persuaded. She said, “The ones who made me change my mind were the thousands and thousands of young girls who have taken to the streets.” (New York Times, Aug. 9) Anti-abortion President Mauricio Macri said he would sign a reform bill. His health minister, Adolfo Rubinstein, supports reform, citing the disastrous results of “clandestine” (illegal) abortions.

Journalist Soledad Vallejos enthusiastically told the Guardian newspaper Aug. 9, “Things will never be the same because society has been changed by these five months debating this law.” Vallejos belongs to the Ni Una Menos (Not One Less) collective, a leading force in this struggle. Its name has become a slogan. Originally, the name meant not another woman’s life lost to gender violence; now it also demands not another death caused by an unsafe abortion.

Many “no” voters cited religious beliefs. Some gave unscientific or bigoted reasons to oppose abortion. Argentinian writer and pro-choice activist Claudia Pineiro wrote in the Guardian that “to reject the bill … [senators proclaimed] that they were saving embryos … and even [outrageously] suggesting that intrafamily rape does not imply violence.” (Aug. 10)

Nora Cortinas, a founder of the Mothers of Plaza de Mayo, said she would quit the Catholic Church over the Senate vote, and criticized Church officials for intervening in other people’s lives and being hypocritical. This women’s organization protests the murders of 30,000 leftists and activists killed during the 1976-83 brutal military dictatorship in Argentina.

The mothers and grandmothers also seek to locate adult children who were stolen as babies from women political prisoners and to reunite them with their rightful families. Cortinas emphasized the Church’s complicity in these atrocities, saying priests blessed the torturers, while nuns gave the kidnapped babies to military and other right-wing families.

Cortinas explained her position on the abortion struggle: “In a health law like this, religion has nothing to do with it … and then this Church says we need to save both lives. … [But] babies, born every day in our country, are forgotten by the Church, living in poverty.” (Telesur, Aug. 11)

Prior to and during the voting, the Catholic Church’s reactionary role was unmasked for all to see. After the bill’s defeat, thousands of people queued up outside the Congress to renounce the Church at tables staffed by the Argentine Coalition for a Secular State.

Film director Lucrecia Martel explained that today’s movement demands women’s autonomy, but “for some, their last bastion of power is their power over women, and those people don’t want to concede that territory.” (Guardian, Aug. 8)

Yet bold young women are challenging patriarchy and misogyny every day and everywhere.

Two needless deaths since the ‘no’ vote

It is estimated that 450,000 clandestine abortions are performed annually in Argentina, a country of 44 million people — one every 90 seconds. Some 70,000 women are hospitalized yearly because of botched procedures, a leading cause of maternal deaths. The lack of legal abortion is a public health crisis.

The reality is women have abortions. The key issue is whether women can have medically safe procedures or must continue to undergo risky, often dangerous, abortions, sometimes with life-threatening results. Additionally, pregnant women with cancer are routinely denied chemotherapy and other treatment because Catholic doctrine prevails in medical matters. It prioritizes the status of the fetus over a woman’s right to essential health care; some women die as a result.

Tragically, two young women have died since the “no” vote, both in hospitals in Buenos Aires province on Aug. 12. Elizabeth, a 24-year-old woman, mother of a toddler, died from septic shock after using parsley stems to try to end a pregnancy. Another young woman died the same day, also from a self-administered abortion.

“Illegality forces the poorest women to resort to use the most desperate practices,” said a doctor in Patina/12, an Argentinian newspaper. (peoplesdispatch.org, Aug. 17)

After those deaths, the National Campaign for the Right to Legal, Safe and Free Abortion and the Network of Health Professionals for the Right to Decide issued a statement blaming all abortion-related deaths on Argentina’s “National Executive Power” and the senators who voted against legalization. The organizations asked: “How many more dead pregnant women are needed to understand that abortion should be legal, safe and free? Clandestinity kills!” Ni Una Menos called these deaths “femicide” by the state and said, “[The senators] don’t care about the lives of the women.” (Telesur, Aug. 14)

Telesur reported Aug. 9 that the law can be presented again to Congress in March 2019, but by then an estimated 87 more women will have died and 48,000 will have been hospitalized for abortion complications.

Women on the move!

Activists in the Argentinian women’s movement hail their forebears, the heroic women organizers against the military dictatorship, as well as the leaders of the Mothers of Plaza de Mayo. A rejuvenated movement protested gender violence in 2015 and then added demands for reproductive rights. Now women workers are calling for equal pay for equal work and an end to workplace gender discrimination.

President Macri’s austerity program has propelled the working class into action. His policies would severely impact women; many are among the lowest-paid workers and/or have precarious jobs. Teachers, mostly women, marched for higher pay March 6.

On International Women’s Day, March 8, hundreds of thousands of women marched in Buenos Aires for equality, abortion rights and an end to gender violence. They also called for a general strike, linking their struggles with the class struggle. Pro-choice women workers marched with unionists in the militant national strike June 25 against government-imposed cutbacks and layoffs.

The National Campaign for the Right to Legal, Safe and Free Abortion, an umbrella organization comprised of 300 groups, has fought for 13 years. Abortion is now being openly discussed throughout the country, and was debated in Congress for the first time.

The victorious overturning of an abortion ban in May in Ireland buoyed the Argentinian women’s movement. In turn, the massive pro-choice mobilizations in Argentina have electrified the women’s movement across Latin America where 97 percent of women live in countries where abortion is illegal.

On the night of Argentina’s vote, solidarity actions took place in over 10 countries throughout the continent. Social media were abuzz with supportive messages from women worldwide. International solidarity was also expressed at mobilizations in Australia, Belgium, England, France, Japan, the Netherlands, Spain and elsewhere.

Argentinian women are in militant motion and will not go back. Young women are determined to fight for their rights. After the Senate vote, pro-choice activists tweeted that this campaign is about more than a law: “It is the struggle for full sovereignty over our bodies.” (Telesur, Aug. 9)