A year ago on Aug. 14, a group of mainly young people in Durham, N.C., took a simple action to end white supremacy that heartened anyone who saw it. And tens of millions did see it — on social media and on newscasts. 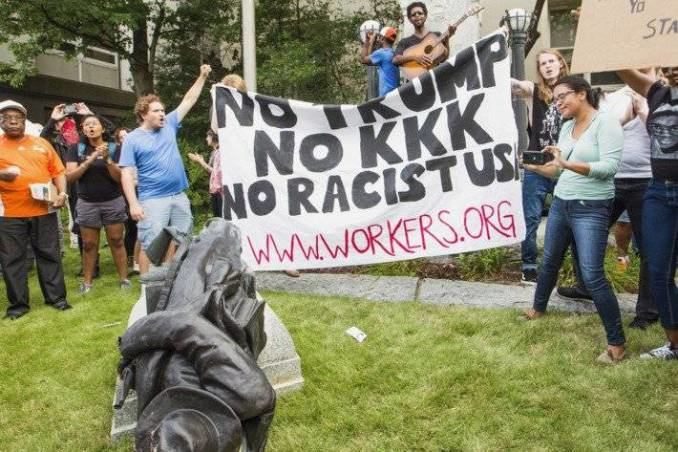 Activists take down a Confederate statue in front of the old Durham, N.C., county courthouse on Aug. 14, 2017.

This week, students and their supporters at the University of North Carolina at Chapel Hill followed the call to “Do It Like Durham,” toppling a “Silent Sam” statue just before the beginning of the fall semester. The tribute to Confederate alumni has stood at the entrance of the campus for 105 years.

In a dramatic event, hundreds of protesters surrounded the massive Silent Sam statue on Aug. 20, covering it with tall banners and dropping smoke bombs as it was being pulled down in the background. Police violently arrested one person during the action. (See accompanying article.)

Many millions of people in the U.S. and more around the world were horrified at the eruption of vile racism manifested a year ago in the torchlight parade of Nazis and other white supremacists in Charlottesville, Va., and the murder of anti-racist Heather Heyer on Aug. 12.

The U.S. president’s bigoted failure to condemn the vicious racists added to the anti-fascist anger and also gave a boost to the worst neo-fascist elements of U.S. society. Could a direct action response push the struggle in the opposite direction from this rightward lunge?

Two days later, a young Black woman looped a rope around the neck of a Confederate statue in Durham. People on the ground tugged on the rope. When the statue hit the ground, to many people’s surprise, it crumpled.

Research showed it was a hollow, cheap “monument,” much like those mass-produced in a Connecticut factory in the early 1900s and sold on the cheap to cities and towns in the South. Their purpose was not to honor fallen soldiers, but to reinforce racist laws aimed at maintaining the oppression of African Americans.

Participants in the Durham demonstration — many of them members of the Durham branch of Workers World Party — were soon arrested and faced heavy charges.

Within days some 100 people came out to say, “I’m against racism. Arrest me, too.” More thousands throughout the country sent messages of support. It was obvious that millions who saw the statue tumble got a big lift from this simple, direct action.

In some cities around the South, where Confederate monuments — including more substantial ones — abound, local governments decided to remove, cover or otherwise alter them. The local regimes were worried that the Durham example might be copied by actions that had popular mass support.

Other statues, including those in the North honoring historical figures who did great but genocidal harm, came under strong attack. That included statues honoring Christopher Columbus, who is infamous for his role in oppressing and massacring Indigenous peoples.

As the Durham defendants showed up in court, backing them up was strong popular support for dismantling these racist symbols. This February the prosecution decided it was wiser to drop the charges on the heroes rather than let the struggle be extended and amplified.

These victories in the struggle against racism must be reinforced as the struggle continues. To commemorate the anniversary of the action, Durham activists issued a call for a gathering there on Aug. 25-26: “How to Topple a Statue, How to Tear Down a Wall.”

The call notes that this month is “Black August, which was started by Black freedom fighters inside California prisons to lift up the many Black liberation struggles taking place across the U.S. and the world. Since 1979, Black August has been a time to build unity, solidarity, and commemorate the fighters who have come before us and were taken too soon by the state and its racist vigilantes.”

Durham activists “invite organizers, freedom fighters, and community members from all over to join us in Durham, N.C. … to Defend Durham, Honor Resistance in Charlottesville and Smash White Supremacy!

“Black people, people of color, im/migrants, and working class people continue to come under intensified attacks. From police killings to raids and deportations, eviction crises and gentrification, to mass incarceration and unemployment, the need for solidarity is more crucial than ever.

“Join us for workshops, political discussions, and actions.”