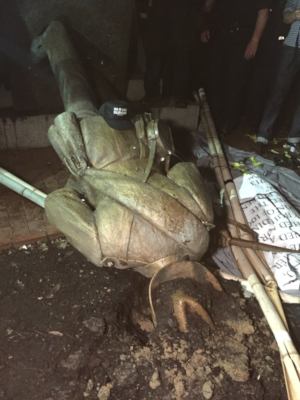 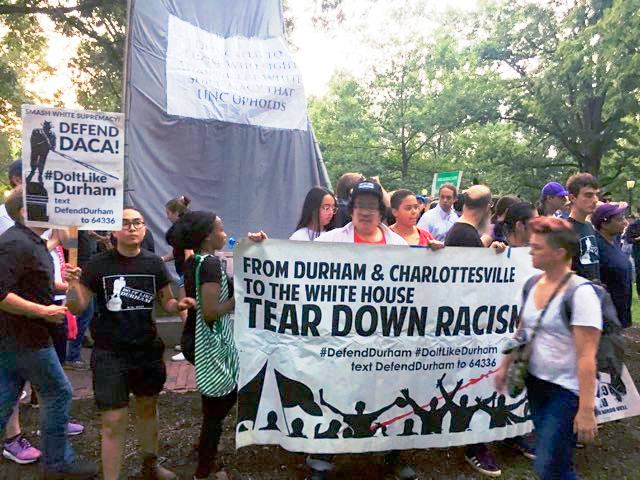 Protesters, who earlier in the evening placed banners around Sam’s base denouncing white supremacy and the legacy of slavery at UNC, brought the statue down shortly after 9:15 p.m. by pulling on a rope affixed to the statue’s neck.

A large cheer arose from the crowd at the first sound of metal creaking against concrete, erupting into jubilant shouts as the statue tumbled. Rain began to fall as the monument lay face down on the ground. Some protesters kicked at the figure; others covered it in dirt. One activist placed a “Do It Like Durham” hat atop the fallen statue in tribute to a similar action just over a year ago when a group brought down another Confederate statue in neighboring Durham, N.C.

A large crowd, estimated between 250 and 500, had initially rallied at 7 p.m. across the street in front of Chapel Hill’s Peace and Justice Plaza to support UNC graduate student Maya Little, who in April spilled her own blood on the statue in protest of the university administration’s continuing inaction. She currently faces criminal charges and expulsion by the university’s honor court. “It’s time to tear down Silent Sam,” Little said. “It’s time to tear down UNC’s institutional white supremacy.”

Rather than memorializing the Confederacy, Little suggested UNC should devote resources to honoring the legacy of James Lewis Cates, a Black Chapel Hill resident and civil rights activist who was murdered on campus in 1971 at the age of 22. Cates’ killers, three white men, were acquitted by an all-white jury.

“After Cates was murdered, his friends, the Black community and organizations such as the Black Student Movement — who at the time were being surveilled by COINTELPRO — rallied to demand a Chapel Hill where Black lives matter,” Little said, pointing out Silent Sam as the location of their protest.

While a few curious onlookers and “pro-Confederate” groups milled about the edges, the crowd was overwhelmingly in support of tearing down the monument.

Silent Sam represents “a legacy of oppression and slavery that was the foundation not only of this university but the whole region,” said one grad student, calling it “a defiant statue that communicates to students of color that this university is more interested in preserving white supremacy than creating a community of openness.”

Silent Sam was erected in 1913 by the United Daughters of the Confederacy to celebrate the 50th anniversary (in 1911) of the Civil War. About 40 percent of UNC students during the war fought in the conflict, almost all for the Confederacy.

At the statue’s dedication, local industrialist Julian Carr (namesake of Chapel Hill’s neighboring Carrboro) gave a speech where he defined Sam’s meaning, praising the Confederate soldier and lambasting the Reconstruction era, when “the bottom rail was on top” in the Southern states.

Carr also offered a “personal anecdote,” recounting, “One hundred yards from where we stand, less than ninety days perhaps after my return from Appomattox, I horse-whipped a negro wench until her skirts hung in shreds, because upon the streets of this quiet village she had publicly insulted and maligned a Southern lady.”

As efforts to remove monuments to Confederate soldiers have escalated in recent years, the North Carolina General Assembly has responded defensively, banning any such actions by local or municipal governments. Silent Sam, long a lightning rod for controversy and the site of numerous protests since the Civil Rights Movement, had become increasingly expensive for Chapel Hill and the state. Security for the statue ran up a tab of $390,000 in 2017 alone.

UNC Chancellor Carol Folt — who had been subject to criticism from several speakers at the Aug. 20 protest — unsurprisingly condemned the action. “The monument has been divisive for years, and its presence has been a source of frustration for many people not only on our campus but throughout the community,” she said in a statement. “However, last night’s actions were unlawful and dangerous, and we are very fortunate that no one was injured. The police are investigating the vandalism and assessing the full extent of the damage.” Gov. Roy Cooper similarly expressed disapproval of “violent destruction of public property.”

Their attitude was not shared by the crowd. “I’m here to be in solidarity,” said one student. “Silent Sam, to me, represents the history of this university that it’s not willing to acknowledge: the Confederacy, oppression and slavery. If we’re going to call ourselves a progressive place we need to have actions that back it up.”

Later, after the crowds had dispersed, university officials dragged the fallen monument to a truck, which was driven to an unknown location.