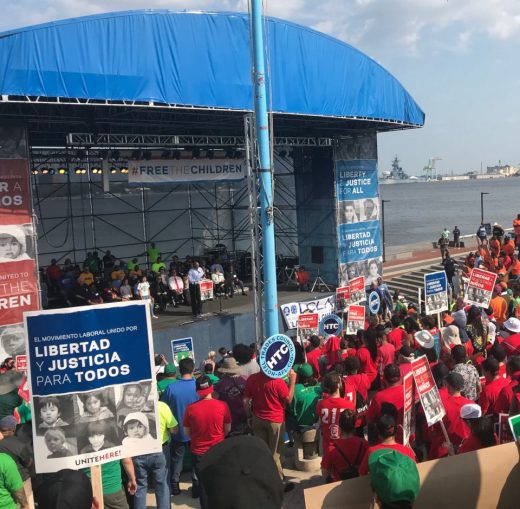 In Philadelphia on Aug. 15 there was union solidarity, both with immigrants and with teachers in Puerto Rico, striking for justice the same day.

Over 2,000 union members and community supporters rallied here on Aug. 15 for “Labor United to Free the Children.” Called as the largest show of union support for im/migrants since Trump’s racist family separation policy began, the event was primarily organized by UNITE HERE, the hospitality workers’ union, which brought nearly 1,000 members from up and down the East Coast to the action.

Unionists targeted Philadelphia for this major demonstration to protest the city’s notoriously vicious Immigration and Customs Enforcement office. The city’s ICE has arrested more undocumented immigrants without criminal convictions than any other ICE office in the country. Philadelphia ICE has also refused to release 100 percent of asylum seekers once their cases have been resolved. (WHYY, Aug. 15)

An occupation to abolish ICE started in Philadelphia in early July and continues as of this reporting. The movement’s demands include the abolition of ICE and the closure of the Berks Family Detention Center. Located an hour from Philadelphia, Berks is a major migrant prison in the U.S.

A tsunami of outrage began to gather in April in response to the Trump administration’s “zero tolerance” of immigrants at the U.S. southern border and the violent separation of children from their parents. In that crackdown, over 2,300 children 12 years old or younger were brutally incarcerated.

But after their jailing, these children represented only 20 percent of the total number of children who were caged in U.S. immigrant youth concentration camps.

In fact, as of June 21, there were approximately 9,500 migrant children locked up in U.S. prisons, in addition to 2,300 or more children jailed after zero tolerance was declared. That’s because the Office of Refugee Resettlement, a division of the Department of Health and Human Services, has been “sheltering” — that is, incarcerating — unaccompanied immigrant children since 2003. These are generally teenage migrants who reach the U.S. border without a parent. (tinyurl.com/ych4jm6r, NBC, June 21)

At the Aug. 15 solidarity event in Philadelphia, unions and allies pledged to continue fighting for immigrants and their families. “Labor United to Free the Children” — working-class solidarity in the struggle against racism and bigotry — is desperately needed for the thousands of migrant children who remain in U.S. prisons.