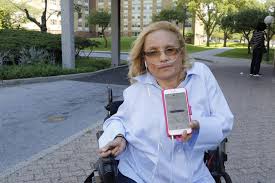 Elizabeth Ramos, 56, beloved activist in the disability community, died early Sunday morning, July 29. She did not die as a result of her disability nor of old age. She died because there was a 5-hour power outage in the Spring Creek Towers housing development where she lived on the 16th floor.

Formerly Starrett City, the Towers is a complex of nearly 50 buildings and 15,000 residents, the largest federally subsidized rental development in the U.S.

Ramos, a wheelchair user since the age of 12 due to scoliosis (curvature of the spine), also had the disability of COPD (chronic obstructive pulmonary disease), which is chronic bronchitis and emphysema. She had been on a respirator since she was 13.

The apartment electricity went out at 5 a.m., and Ramos’ respirator ran only on electrical power. Daughter Ashley Ramos said she immediately tried to help her mother with oxygen from backup tanks, but her mother passed out. The family performed CPR and called 911.

Ashley said when she told the 911 operator that her mother was dying, she was cruelly admonished to “calm down.” Medical help took so long to arrive, her mother was dead by the time it came. The family disputes the New York City Fire Department’s self-serving claim that Ramos died of causes other than the power failure.

According to her family, Ramos often worried, after being denied use of a backup generator by building management, about what would happen during a power outage. The building complex, which operates its own power plant, has experienced many power outages.

Elizabeth Ramos was most known for her efforts to expand accessible transportation services for people with disabilities. Ramos served as a board member for the pioneering advocacy group, Disabled in Action; participated in advocacy work at the Brooklyn Center for Independence of the Disabled; and was a member of Independence Care System. She actively participated in the current effort to stop New York Gov. Cuomo’s plan to dismantle ICS, an excellent health insurance program allowing people with disabilities to live independent lives and not be forced into institutions.

“Elizabeth Ramos was a tireless disability rights advocate and pillar of our community,” said commissioner and wheelchair user Victor Calise of the NYC Mayor’s Office for People with Disabilities. “I am deeply saddened by her passing and extend my condolences to her family and the disability community as I join them in mourning her loss.”

In July 2016, Ramos tried unsuccessfully three times over the course of an hour to get an accessible taxi from her home through the UberWAV app platform. No rides showed up, leaving her no viable access to transportation. There was no level of service, response time or convenience available to her, in contrast to able-bodied passengers seeking on-demand transportation.

On July 29, 2016, she filed suit in Brooklyn State Supreme Court under New York City and New York State human rights laws to get the Uber taxi app classified as a public accommodation like taxis.

On June 6, Ramos won a partial legal victory in her suit. A Brooklyn judge ruled Uber could no longer use the mandatory arbitration clause in its passenger contracts to force customers to accept private dispute arbitration, instead of exercising their right to take legal claims to court.

Ramos vowed: “I am not going to stop until we can go to the app and get a ride as quickly as everyone else.” Ian Poulos, Ramos’ attorney, described the enormous impact this ruling could have as precedent in other lawsuits — to aid in overturning arbitration agreements and suing Uber nationwide.

Ramos was not alone in fighting Uber. In April 2016, the National Federation of the Blind, which is also leading the fight to win minimum wage equity for people with disabilities, sued Uber for numerous instances when drivers would not pick up blind passengers relying on guide dogs. NFB won, and the court ordered Uber to provide rides to blind passengers and their guide dogs.

Elizabeth Ramos is survived by her daughter Ashley and her longtime companion William Clarke, as well as her many friends.