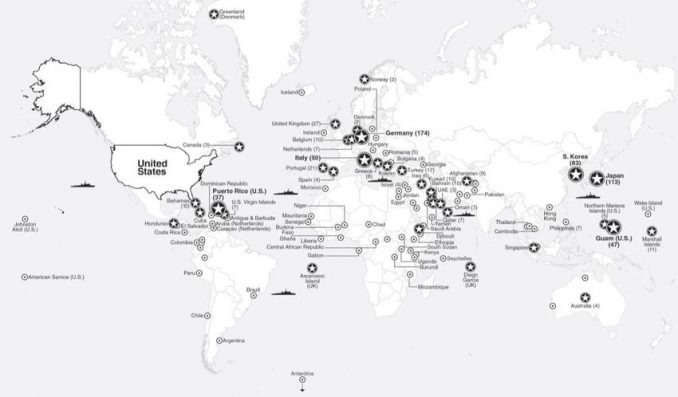 Aug. 11 — The latest round of U.S. sanctions on Russia illustrates how the Pentagon and its allies in the capitalist government are moving independently of the U.S. president to undermine his personal diplomacy when it conflicts with the military’s goals.

For reasons that are a matter of much speculation, Trump has tried to realign U.S. imperialist foreign policy to include a rapprochement with Russia. He has done this since he began his election campaign. This attempt at realignment was expressed dramatically at the Trump-Putin Helsinki summit in July.

Make no mistake, Donald Trump is no partisan of peace. He is bellicose, belligerent and an impulsive warmonger when it suits him. He is a bully in international relations as well as an authoritarian promoter of racism, sexism and bigotry at home.

Trump has done much to feed the Pentagon war machine. He has given the brass record budget increases, with the 2019 military budget officially topping $716 billion. He has authorized modernization of nuclear weapons. He has funded increases in jet fighters, ships and troops. In short, he has done everything to keep the military-industrial complex satisfied and on board with his administration.

“The increase in military spending is one of the largest in modern U.S. history, jumping by 9.3 percent from 2017 to 2019,” according to Todd Harrison, director of defense budget analysis at the Center for Strategic and International Studies, a think tank.” (Washington Post, June 10)

Meanwhile, the masses of people are losing their health care, their child care, their food stamps and their housing while suffering from poverty, joblessness and underemployment. But Lockheed Martin, Boeing, Raytheon, United Technologies, Northrop Grumman and other merchants of death are bingeing on profits.

Perhaps Trump thought his generosity to the generals and admirals would keep the Pentagon and the high command in sync with his personalized diplomacy. Not so.

As for softening toward Russia, the Pentagon is having none of this. The military’s conventional right-wing allies in the administration, National Security Adviser John Bolton and Secretary of State Mike Pompeo, have subverted Trump’s personal diplomacy.

For example, Pompeo and the State Department just recently notified Congress that the administration considers Russia behind the poisoning of two former Russian spies in England with a chemical agent last March — six months ago!

Washington claims that Moscow violated the Chemical and Biological Weapons Control and Warfare Elimination Act of 1991. This is the act that U.S. imperialism used against Syria and the Democratic People’s Republic of Korea and is now using against Russia.

The sanctions imposed on Russia involve hundreds of millions of dollars on so-called “dual-use” products that could hypothetically be used for military purposes. More draconian sanctions, denying Russian banks access to U.S. markets if Russia does not prove that it no longer uses chemical weapons — a charge that Moscow vigorously denies — will be imposed in 90 days.

Trump has seized on the diplomatic overtures of Kim Jong Un, head of the Democratic People’s Republic of Korea and of the Workers’ Party of Korea. Kim tried to defuse the crisis on the Korean Peninsula by offering to meet on denuclearization. Trump accepted the invitation and promoted a bilateral summit meeting held in Singapore on June 12.

Trump was trying to achieve “historic” status by bringing about an end to the crisis. When he came back, he spoke about the Korean War being over and mentioned a possible peace treaty to finally end the war, begun way back in June 1950. The fighting ended in August 1953 with a ceasefire agreement, but the U.S. had never before agreed to even discuss a formal peace treaty.

Trump actually called off the annual war exercises carried out by the U.S. and South Korean military that exerted military pressure aimed at bringing down the DPRK.

Since the Singapore summit, however, virtually the entire U.S. ruling class, media and military have tried to undermine the process toward ending the Korean War. They call the DPRK leaders liars who can’t be trusted. Lately they have clamored for increased sanctions because the North won’t “denuclearize” now.

There is a simple explanation for why the denuclearization process has not begun.

Two prestigious reporters for the imperialist New York Times, David Sanger and William Broad, admitted in an Aug. 10 article that Washington has reneged on pledges made during the Singapore summit and subsequent talks:

“On Thursday [Aug. 9], North Korea’s state-run newspaper, Rodong Sinmun, called the declaration of the end of the war ‘the demand of our time’ and that it would be the ‘first process’ in moving toward a fulfillment of the June 12 deal struck between Mr. Trump and Mr. Kim. Pyongyang also wants peace treaty talks to begin before detailing its arsenal.”

In other words, reactionary hawks in the Trump administration and the military are deliberately sabotaging the precondition for denuclearization that must have been verbally agreed to by Trump, and perhaps by Pompeo — that talks first begin on a peace treaty to end the now 68 years of warfare by U.S. imperialism before the DPRK gives an inventory of its nuclear weapons. Thus, the right wing is now trying to reverse Trump’s Korea ­diplomacy.

A further example of the military going around Trump occurred when, ahead of last month’s NATO meeting, Trump’s national security adviser, right-wing militarist John Bolton, sent instructions to European imperialist defense ministers to work out a joint declaration before Trump got to the meeting. Its aim was to prevent Trump from blowing up the meeting with his hostility to NATO.

An Aug. 9 New York Times article detailed how Washington worked with Brussels to get in place an agreement by which Europe pledged to provide 30 battalions of troops, 30 squadrons of aircraft and 30 battle-ready ships by 2020. The goal of this deal was preparation for a NATO war with Russia.

A North Atlantic Command was to be set up in Norfolk, Va., to be ready for such a war. NATO Secretary General Jens Stoltenberg reinforced Bolton’s directive during a gathering of the ambassadors on July 4. By the time Trump arrived in Brussels, all the deals had been agreed to. Usually, these deals are haggled out at the very end of such meetings.

The Pentagon is carrying out provocative war maneuvers against the People’s Republic of China. The Navy has been sending warships to within 12 miles of Chinese islands in the South China Sea, and on Aug. 10 the U.S. sent a spy plane over them. A CNN crew was aboard the plane recording the events.

“During the flight the crew received six separate warnings from the Chinese military, telling them they were inside Chinese territory. … ‘Leave immediately and keep out to avoid any misunderstanding,’ a voice said. And each time the Navy sent the same message: ‘I am a sovereign immune United States naval aircraft conducting lawful military activities beyond the national airspace of any coastal state.’”

That means that some 6,000 miles away from the U.S. and less than 10 miles from China, the Pentagon claims “sovereign immunity.”

The point is that this provocation comes at the same time that Trump opened up a trade war with China. In this case, his aggressive economic policy is in sync with the Pentagon’s military policy, so there is no sabotage from either faction.

Trump, Marxism and the state

Marxist analysis is needed to unthread the complicated political relations inside the Trump administration and with Congress. According to Marx, the capitalist government is the executive committee of the ruling class.

Trump’s presidency itself is a reflection of the crisis of capitalism. Even though he lost the popular vote by 3 million, his entire political rise was based upon the political demoralization of a section of the masses and the bankruptcy of the corporate leadership of the Democratic Party. After voting for Obama in 2012, millions fled to vote for Trump in 2016. Among those voters were many who had supported Bernie Sanders’ unsuccessful bid in the primaries, but then switched to Trump.

Trump appealed to anger following years of wages being driven down and unions undermined. At the same time he attacked the setbacks for imperialism abroad, including the failed attempt to completely take over Ukraine in 2014. His election is part of a widespread racist, anti-im/migrant wave generated across the capitalist world, including Europe.

Trump was a total outsider who triumphed over the Republican establishment. At first, his government was a coalition between that establishment and the right wing. Over time, Trump ousted the establishment figures who could tell him no: Rex Tillerson, former CEO of ExxonMobil, who had been his secretary of state; Gary Cohn, former CEO of Goldman Sachs, who was his chief economic adviser; and Gen. H.R. McMaster, his national security adviser.

Trump thought he was now free to pursue his program to revive the fortunes of imperialism. His program was to pull out of the Paris Agreement on the environment; pull out of the Trans-Pacific Partnership; bully NATO into submission; open up a racist war on immigrant workers; align with the anti-immigrant forces in Europe; blow up the Iran nuclear treaty; wage a trade war with China and other countries; tear down and renegotiate NAFTA, etc.

Of course, his program is at odds with the traditional ruling-class policy of keeping alliances with European imperialism, while holding these allies in subordination. The establishment is largely hostile to the People’s Republic of China, to Iran and unified in its opposition to Russia. But even his right-wing advisers stepped in to save the NATO alliance from Trump.

Obviously, Trump’s policies are completely detrimental to the long-standing strategies of the U.S. capitalist establishment for world domination. In fact, however, the establishment has a totally erroneous analysis of its own crisis and could not solve it with its usual approach. Both the establishment view and Trump’s view of the crisis are false.

Only a revolutionary Marxist understanding of the crisis corresponds to objective reality. And only such a view leads to a resolution of the crisis favorable to the workers and the oppressed.

The crisis of U.S. imperialism and capitalism stems from the insatiable, aggressive need of Washington and Wall Street to reconquer and recolonize the vast territories they lost during the Soviet period in the 20th century. It is a failed attempt.

They cannot turn the Pacific into an “American lake” again because China has risen up. They can do horrific damage, but they cannot recolonize the Middle East or Iran because the oppressed in the region will not let it happen. They cannot turn Latin America into a U.S. “backyard” despite their “regime change” aspirations. Their brutal treatment of Puerto Rico and of Latinx im/migrants explodes their false promises. And socialist Cuba still stands in their way.

The crisis stems further from the ruling class’s insatiable thirst for profit and the resultant growing inequality and grinding poverty of the masses in the U.S. These masses are the ultimate social base of imperialism, a base that is eroded with every tax cut for the rich, every attack on social services, every act of racist police brutality and mass incarceration. The ruling-class parasites are desperate to suck every last nickel of profit out of the masses as their system declines.

So both views of the crisis, Trump’s and that of the broader capitalist ruling class, are false. Capitalism has no solution to its own systemic crisis.