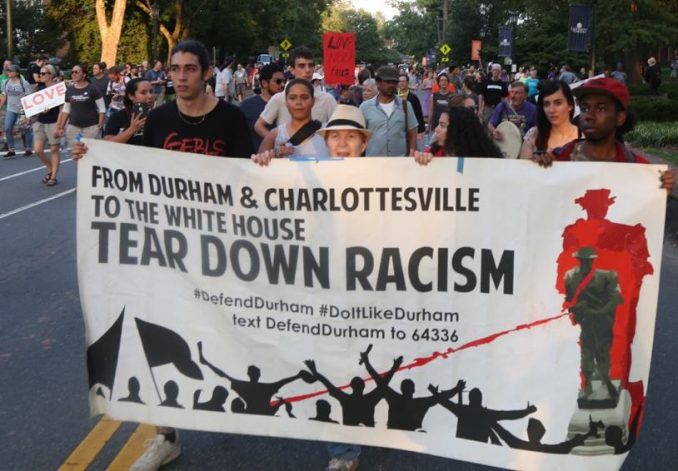 The weekend of Aug. 11-12, the first anniversary of last year’s deadly march by neo-Nazis and hooded Klan members in Charlottesville, Va., confirmed one thing: These fascists don’t control the streets — no way.

Instead, large rallies, marches and protests by progressive forces in both Washington, D.C., and Charlottesville owned the day.

The “alt-right,” as the violent white supremacists are euphemistically called, were encouraged by the racist, misogynist, anti-immigrant Trump presidency to climb out of their klaverns last year and show themselves in public in Charlottesville in an armed torchlight parade carrying fascist symbols.

Even after one of them, at the end of the rally, plowed through a crowd of people with his car, killing 32-year-old Heather Heyer, Trump at first refused to condemn them, referring to “hatred, violence and bigotry on many sides.” Only after a storm of protest did he reluctantly amend that and mention racism.

This year, calling themselves “Unite the Right,” the organizers applied for a permit to rally in D.C. on Aug. 12 at Lafayette Square. They estimated that 400 people would attend, including former KKK Grand Dragon David Duke.

On the day, barely two dozen fascists showed up. Only a huge police presence saved them from the anger of the thousands who turned out to stop them. According to ABC10 news, “Unite the Right rally participants said other members were ‘scared’ to attend the rally in D.C., making the group of about 30 vastly outnumbered by the thousands of counter-protesters surrounding the area.”

Earlier, when the Washington Metropolitan Area Transit Authority announced it would close down gates to the general public and let the fascists take special trains to the rally, the system’s largest union, Amalgamated Transit Union Local 689, refused to go along. The WMATA then publicly rescinded its offer of ­special trains for the fascists. But on the day it went ahead anyway and closed down gates to the general public, prompting charges from the union that the agency had lied.

While the openly Nazi and white supremacist forces may now be afraid to take to the streets, that doesn’t mean they have been defeated. On the contrary, they are not only in their klaverns and death cults, but many wear the uniforms of local police and Border Patrol.

The slogan “Cops and the Klan work hand in hand” is still valid. And the far-right Trump appointees now in charge of so many federal agencies — like the notorious torturer Gina Haspel, director of the CIA — must be fought as they push the government even further to the right.

The following account of what ­happened in Charlottesville, Va., is by Malik Clark of G-Rebls and Workers World Party.

After fascist and Nazi groups announced a Unite the Right rally in Charlottesville, Va., for Aug. 11, University of Virginia students organized their own Rally for Justice on that day. The approach of the anniversary of Heather Heyer’s death a year ago during a similar rally by the far right conjured noticeable tension as everyone wondered what would happen. Would the Ku Klux Klan and neo-Nazis return to clash with the anti-fascist demonstration?

Organized by the activist group Students United, the event drew over 200 protesters carrying banners and signs denouncing white supremacy, neo-Nazis and the police. The student group planned to “reclaim the north plaza of the Rotunda,” where a statue of slaveowner president Thomas Jefferson stands — a target since the previous Unite the Right demonstration in Charlottesville.

The students had been told they would be allowed to convene in this area, but law enforcement blocked off the statue and prohibited an occupation.

Many organizations came out in support of the student rally, including community groups, members of the Catholic Church and local activists. They gathered to the east of the statue and the Rotunda. Passionate Black student leaders spoke of Heather Heyer’s tragic death and how the heavy policing of their approved rally was evidence of the people’s power. Survivors faced their resurfaced trauma and spoke about what the past year has been like for them and the importance of the community learning from tragic events.

State law enforcement overwhelmed most free space within the university. A myriad of police cars, vans, armored vehicles and buses riddled the side streets and student/faculty parking lots. Officers in full riot gear made their way through the pavilions to approach the rally.

The peaceful Rally for Justice became a target of yet another show of power by the tools of the government.

Protesters formed a human barrier to keep the cop militia away, shouting, “We don’t see no riot here, why are you in riot gear?”

The police came without warning and without requirement. The white supremacist neo-Nazis and Klan never showed.

The students, not wanting to lose control and get caged in by the surrounding officers, moved the rally to the streets and marched through the campus, occupying space as they went. As the march progressed, police interference continued to block off routes. The students eventually lost control of the procession as the demonstration dissolved and marched off the campus.

The alt-right did not need to come to the rally — the police did the work of trying to intimidate and instill fear within our ranks. This demonstration confirmed the unwarranted police aggression toward the left. Neo-Nazis can march with torches without fear, yet a moment of healing for a hurting community requires riot gear.

By contrast, a rally in Booker T. Washington Park the next day was very well received. Many members of the community came out early on Sunday morning, empowering one another with spirituals, chants ands words of solidarity.

One community member, Rosia Parker, spoke on the importance of the community standing against the police and white supremacy. “Charlottesville was built by the hands of Black people,” she said, adding, “We’re still taking this back, by force.” Parker and Katrina Turner had been pushed out of the way of the car that killed Heather Heyer during last year’s tragedy.

Quoting Assata Shakur, Parker emphasized the need for unity between all people of Charlottesville. Community members spoke about the many difficulties facing Charlottesville, such as displacement, unaffordable housing and police brutality.

The rally brought attention to other victims of violent clashes at the first march, so they would not be forgotten.

The presence of the Ku Klux Klan in last year’s Unite the Right march was a wake-up call to this community. The community addressed the event as a racist terror attack. Don Gathers of the Charlottesville local Black Lives Matter movement urged everyone to do their part in the fight against racism and to hold Charlottesville officials accountable.

The spirit of Heather Heyer can only be honored by fixing the problems that created such an influx of opposition. The people of Charlottesville are to be commended for being able to overcome their trauma and turn a terrifying experience into a movement for equality and peace.