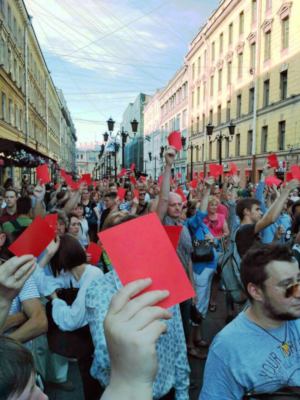 Across the vast breadth of the world’s largest country by area, from huge cities to small towns, workers young and old have taken to the streets this summer to protest a plan by the capitalist government of the Russian Federation to raise the retirement age.

The plan was unveiled by Prime Minister Dmitry Medvedev in June, on the eve of the Russia-hosted World Cup soccer championships. Activists and ordinary workers alike were outraged that officials tried to sneak the unpopular measure under the radar while people were distracted by the games.

President Vladimir Putin, who vowed publicly in 2005 never to raise the retirement age, has remained silent.

Workers in the U.S. will immediately recognize that Russian workers have a much lower retirement age than they do. That was a key accomplishment of the working class during the early years of the socialist Soviet Union. The current retirement age was established all the way back in 1928.

It’s one of the last pillars of worker protection remaining from the socialist era. Russian workers, who have suffered greatly since the capitalist counterrevolution of the early 1990s, including a catastrophic decline in life expectancy, are determined not to lose this historic conquest.

“If the retirement age is increased, every citizen of Russia will be robbed of more than a million rubles ($16,000), and it is unacceptable,” declared Left Front leader and former political prisoner Sergei Udaltsov at a 10,000-strong protest in Moscow. (Associated Press, July 28) 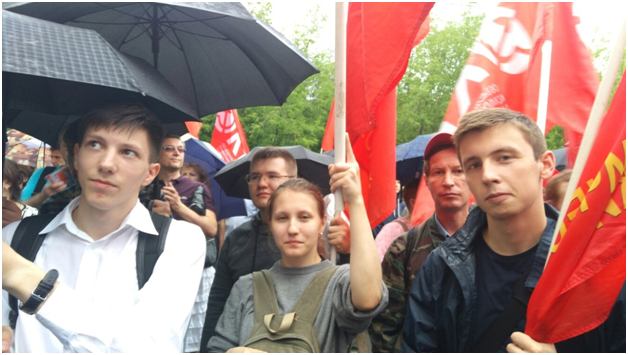 Security measures for the World Cup gave authorities an excuse to ban protests in many major cities in June and July. So regional centers and smaller cities took the lead in organizing demonstrations. In many cases, these have grown into weekly or even daily actions drawing hundreds or thousands of workers.

“In Saratov, rallies now take place almost every day,” reported  the left news site Free Press. “Even the terrible heat doesn’t stop people. From 300 to 1,000 attend. They hold rallies, gather signatures on petitions, which they then send to the Kremlin. …

“In Kemerovo, the capital of the Kuzbass mining region, the mayor’s office agreed to a protest near the racetrack, which is on the outskirts of the city and difficult to reach by public transportation. Nevertheless, about 1,500 people came to the rally, including from remote areas. …

In most cities, protesters have also raised their voices against a planned 2 percent rise in the value-added tax on consumer goods (similar to sales tax in the U.S.), utility rate hikes and surging prices for gasoline and heating fuel.

On July 18, a protest permit was finally granted in Moscow, although in a “designated free speech area” in a park far from public view. Thousands turned out.

The same day, hundreds flooded the famous Nevsky Prospekt in St. Petersburg (formerly Leningrad). City officials refused organizers a permit. So the people, banned from using signs or chanting slogans, held aloft red “stop cards” used to penalize soccer players. In this way they dramatically showed their opposition to the planned retirement age hike and use of the World Cup as an excuse to silence their protest. At least 14 people were arrested. (RotFront.su, July 19)

Despite the protests and polls showing 90 percent public opposition, on July 19 Russia’s lower house of parliament, the State Duma, approved the plan to raise the retirement age on the first reading by a vote of 328-104. (SVpressa.ru, July 20) It must pass a second reading, planned for late September, before moving to the upper house.

Finally, on July 28, a day of coordinated mass protests was held in the capital and over 150 other cities across the vast Russian Federation. At least 10,000 came out in Moscow. The day of action was principally organized by the reformist-led Communist Party of the Russian Federation (KPRF), which has a wide base. Organizers included revolutionary left parties, labor unions and many other groups.

The protests forced a concession from the government. On Aug. 8 the Central Election Commission authorized three groups of petitioners to begin organizing for a nationwide referendum on retirement age. Activists cautioned, however, that it was being carried out to divert the protest movement.

The CEC authorized three different groups — the KPRF, the capitalist Fair Russia party and a group of nongovernmental organizations — to organize around proposed referenda with very similar wording, setting them in competition against each other. Only one of the referenda can be approved, and each requires overcoming enormous organizational hurdles. (Tass, Aug. 8)

Despite these challenges, the struggle against raising the retirement age is shaping up to be the largest protest movement of the working class in Russia since the 1990s. And it comes at a critical moment — not only for the immediate demands of the workers — but because of the growing threat posed by U.S. sanctions and NATO war moves against Russia.

As the war danger escalates, it will be essential for the Russian workers to raise their voices independently and demand more effective, internationalist means to fight U.S. imperialism than the current oligarchic rulers can manage.

Behind the pension crisis

According to Labor Minister Maxim Topilin, the government plan would slash the number of people eligible to receive pensions by almost 11 percent — 4.6 million people — by 2024. Officials claim this is not a death sentence for older workers already tottering on the edge of destitution, but rather an opportunity for new, higher paying jobs through professional retraining.

This refrain will sound familiar to many workers in the U.S. In fact, Medvedev, Topilin and other proponents of the plan are explicitly looking to the U.S., with its cuts in social programs and increased pressure on workers to delay retirement, despite the steep decline in longterm, well-paying jobs.

Russian workers aren’t fooled. Among the most popular signs at recent protests are “Pension in the grave” and “Be a patriot — kick the bucket before you get a pension.”

According to Oleg Babich of the Russian Confederation of Labor, by 2024 the economy would need to generate between 7 and 7.5 million jobs to accommodate both delayed retirements and young people entering the job market. “We have figures from the same Ministry of Labor that 300,000 jobs will be created next year,” said Babich. (SVpressa, July 19)

Others point out that the destruction of the institutions that supported workers in socialist times means the “reform” would have a massive impact on the whole working class, not just those approaching retirement age. The loss of affordable housing and quality, accessible health care means working families will face the same crisis that those in the U.S. with senior parents and grandparents do.

Another social condition to consider is that with the sharp decline in child care options for workers, grandparents are increasingly called upon to watch young children while parents work or attend school.

Academics and activists agree that the reason the Putin-Medvedev regime is pushing the unpopular attack now is an impending deadline in 2022, when retiring workers would first begin drawing on the new Western-style, investment-based pension system introduced after the destruction of socialism.

This system has been ruthlessly looted for short-term gains by the oligarchs. If people continue to retire at the current rate, by 2024 the government will be unable to hide the shortfall or its causes. “It was not abstract funds that were plundered,” noted Dr. Nikita Krichevsky, chief researcher at the Institute of Economics of the Russian Academy of Sciences. “They plundered part of people’s salary that was deferred for many years for use in old age.” (SVpressa, July 19)

“Let’s be honest — the pension, even before its planned cancellation, was insultingly small,” says Anatoly Baranov, a secretary of the United Communist Party. “It’s impossible to live on it, and the ‘young’ pensioners are forced to somehow earn additional income. But this tiny pension is, in fact, a small acknowledgement that at 60 years old you can’t earn as much as at 30. …

“If the state in unable to fulfill its obligations to citizens of retirement age — then declare yourselves bankrupt! And we ourselves will take what we need from the stolen property. Give us back the factories and oil industries that were squeezed dry by the oligarchs.” (UCP.su, July 19)

Or as a woman protesting in Tver put it: “In China, thieving officials are taken in the streets and shot, and their property confiscated. We want that too.” (New York Times, Aug. 8)