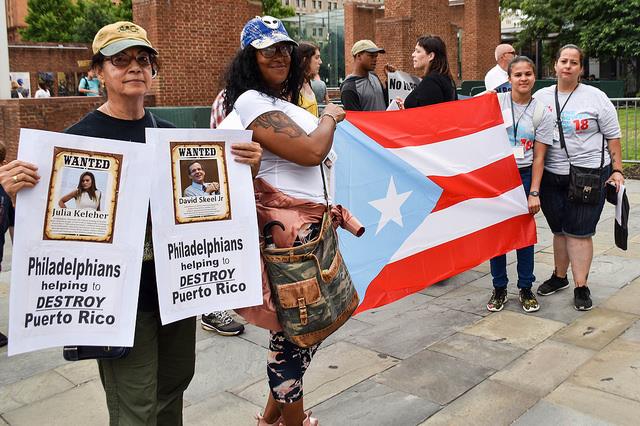 The crisis of the Puerto Rican nation continues spiraling downward and is about to hit bottom. The main news every day only increases people’s indignation. Each day proves without a doubt Puerto Rico’s character as a colony. Each event adds another nail in the coffin of the farcical “pact between Puerto Rico and the United States” that was the “Free Associated State of 1952,” a false autonomy for the archipelago.

During the second week of August, it was clearly exposed who really, directly governs in Puerto Rico: the Congress of the United States, through its imposed Fiscal Control Board (a dictatorial Junta). Those who voted in past Puerto Rican elections, thinking that they would elect their leaders, have seen that their vote was a fantasy exercise in vain. The reduced participation in the last elections indicated Puerto Ricans’ growing lack of confidence in their government.

The last decision resolved two lawsuits filed by the Puerto Rican government, one from the Legislature and another from Gov. Ricardo Roselló. It referred to the FCB’s power over the insular government under the Puerto Rican Constitution. It must be remembered that this Constitution was authorized by Law 600 of 1952, which was approved by the U.S. Congress.

With a sentence, the judge dismisses any aspirations of local autonomy: “The power granted to the board by section 205 (b) (1) (K) of PROMESA allows the FCB to make binding policy choices for the commonwealth government, despite the governor’s objection of the recommendations under section 205.” ­(elnuevodia.com, Aug. 8)

Section 205 of the PROMESA law refers to public policy recommendations and is basically the implementation of the interests of the U.S. Congress: to control payrolls, reduce expenses (pensions, benefits, etc.) and privatize government agencies that are potential profit generators.

Although the judge establishes that the FCB cannot pass laws, she said that it has “budgetary” and “negotiation tools.” As the saying goes, “Whoever pays the piper calls the tune.” When the FCB imposes a fiscal plan that satisfies U.S. interests, it goes above and beyond any Puerto Rican law. For example: What difference does it make if the Puerto Rican government wants to preserve the Christmas bonus for public and private workers (an obligation under PR law) if the FCB’s fiscal plan does not include any source to pay for it?

It should be pointed out here that the Junta’s work has two central purposes: to balance the budget and return Puerto Rico to the credit market. Of course, central to this is paying the bondholders as much as possible at the expense of the people.

As a result of this decision, imposing the Junta’s fiscal plan will greatly exacerbate the people’s situation. Apart from reduction of the Christmas bonus — which is the annual stimulus that helps families and small businesses balance their budgets and stay afloat for the rest of the year — layoffs will increase; employment positions will decrease and retirement plans will be reduced, pushing the elderly population into poverty. Also, government services will be cut and worsened at the central level and in the municipalities where budgets will shrink even further.

Classes start at the beginning of August in Puerto Rican schools. How will the dictatorship of the U.S. Congress through the seven Junta members impact the Puerto Rican educational system? Never before has a school year started in such a clumsy manner, with so much uncertainty for teachers, students and their families and with so much disorganization and incongruence, especially for students in elementary school and those who need special education.

It should be noted that even though Gov. “Ricky” Roselló filed a lawsuit against the Junta, his government is politically in synch with the Junta. Congress has used the Puerto Rican government as an “easy fool” to achieve its purposes. The Roselló administration, which aims to “impose” statehood — as if that were possible — is trying to turn Puerto Rico into a copy of a U.S. state.

The governor has docilely followed the suggestions of U.S. business interests by hiring administrators, companies, consultants and others, offering them multimillion-dollar contracts. His policy has been to imitate even the failures in many U.S. states, such as “charter schools,” called “alliance schools” in Puerto Rico.

The most appalling case has been the hiring of Philadelphia-born Julia Keleher as secretary of education. She is in step with the destructive policies promoted by U.S. Secretary of Education Betsy DeVos, who recently visited the island to reinforce plans to privatize education.

As if it were a premonition, Roselló’s reply to a reporter at the University of Pennsylvania’s Penn Gazette magazine, when asked why Keleher was hired, was: “Very bluntly, we asked her to break the system and rebuild it again.” ­(thepenngazette.com, April 23)

This is precisely what Keleher is doing. In a Machiavellian way, she closes and consolidates schools based on numbers and figures, without visiting them, knowing the condition of their buildings or learning about the adjacent communities. She has closed model schools which are in good physical shape with special classrooms to accommodate the different tasks required for special education students, who exceed 40 percent of Puerto Rico’s student body.

With the excuse that thousands of children left after Hurricane Maria, Keleher closed nearly 300 schools located in the poorest, most remote neighborhoods in the mountains and rural areas, and concentrated the students in urban areas, creating difficult access due to traffic congestion. She gave no reasons for her actions to teachers and family members who asked her why. Often, she only replied, “Because.” — showing there had been no planning process other than statistics.

Just two or three days before the start of school on Aug. 13, it was reported that due to overcrowding in schools where the new plan had consolidated the student body at random, the Department of Education purchased 14 trailers worth $1.6 million for use as classrooms. These trailers are mounted on unsafe concrete blocks and lack electricity and toilets.

Moreover, the Department of Education is dividing existing classrooms in established schools to accommodate two classrooms. That is dangerous, since there is only one door for both entry and exit. Meanwhile, schools in excellent condition remain padlocked.

Schools in good condition have been sold. A shameful example was the Julia de Burgos School in Carolina, which was “sold” for $1 to the Living Water Fountain Church. It is now a bilingual, Christian private school called “The Fountain Christian Bilingual School.” During the changeover, a mural painted in 1966 by José Antonio Torres Martinó was destroyed. This privatization process goes against the island’s Constitution that ensures a secular, public education.

The Department of Education is a total mess. It tried to impose online tuition. Many children are in the care of their grandparents, who are unfamiliar with the internet and couldn’t enroll them online. Also, areas far from city centers still lack a consistent internet signal. For this reason, the education department had to accept at the last minute that children could enroll in school just as they used to before the hurricane.

Regarding teachers, they also received a real slap in the face from Keleher. She has changed the subjects they teach at random, invalidating their education, studies and experiences. She has changed the grades they teach and sent teachers to faraway places. For example, a 60-year-old teacher in Patillas, in southern Puerto Rico, was assigned to teach on the island municipality of Vieques, which would be a four-hour commute for her each way, including the boat ride!

These actions are all being done to create a Puerto Rico open to foreign investment, as mandated by the Fiscal Control Board and the U.S. Congress. It is a Puerto Rico that “is a blank slate,” said Rosello a few months ago when promoting the island to businessmen. His comment infers a Puerto Rico that is insecure for its working class, where the people would be servants and where there would be no regulation on the flow of megaprofits.

But the teachers are ready to fight back and have called for a strike on Aug. 15, two days after school starts.

Puerto Ricans living in Philadelphia have begun a campaign to “decorate” the surroundings of the University of Pennsylvania with “Wanted” posters showing photos of Julia Keleher and David Skeel, a law professor at the school and member of the Fiscal Control Board.

On Oct. 27, the International Tribunal on U.S. Colonial Crimes in Puerto Rico will hear testimony in New York City about the attacks on education that are part of the colonial crimes being committed against the Puerto Rican people. For more information about the tribunal, visit PuertoRicoTribunal.org.