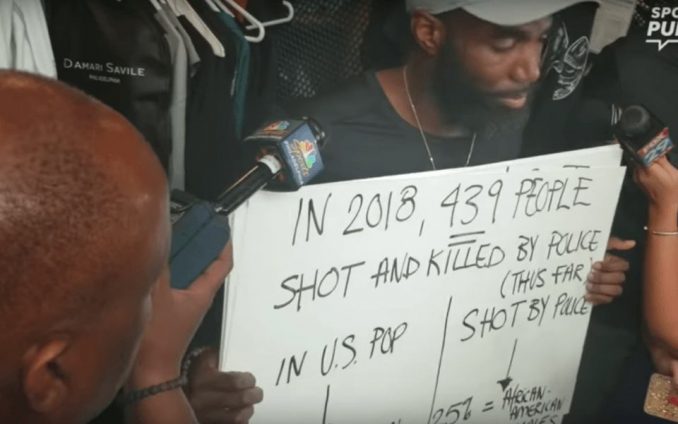 Malcolm Jenkins holds a silent “you are not listening” press conference June 6 in response to Trump’s disinviting Eagles to White House.

July 30 — The struggle between National Football League players and billionaire owners continues to dominate sports and political headlines on social issues. The NFL Players Association, the union representing the players in a league that is at least 70 percent Black, filed a grievance on July 10 in response to a policy passed on May 23 by 31 of 32 owners.

The owners’ policy stated that players could be fined for kneeling during the playing of the national anthem during the 2018-19 season. Only Jed York, owner of the San Francisco 49ers, abstained from voting.

The bosses’ action is not an unprecedented one. In January 1934, the fascist Nazi government banned its football club from playing against a French team when the club refused to give the Nazi salute before a game.

A July 10 press release from the NFLPA stated: “Our union filed its non-injury grievance today on behalf of all players challenging the NFL’s recently imposed anthem policy. The union’s claim is that this new policy, imposed by the NFL’s governing body without consultation with the NFLPA, is inconsistent with the collective bargaining agreement and infringes on player rights.” (www.nflpa.com)

Since the grievance was filed, both sides in the dispute, the Players Association and the owners, agreed to put the policy on hold until further negotiations take place. A July 19 public joint statement read: “No new rules relating to the anthem will be issued or enforced for the next several weeks while these confidential discussions are ongoing.” (CNN.com)

If the bosses’ decision eventually gets enforced, it would give the NFL hierarchy the right to fine any player for taking a knee or expressing any kind of protest during the anthem. It would also give individual owners the option to impose an additional fine on a protesting player. Players’ sole option would be to stay in the locker room until the anthem is finished.

When players were informed of the new policy by owners, many were angered and frustrated by having their freedom of expression stolen from them.

Justin Casey, a three-time Pro-Bowl defensive end for the Tennessee Titans, stated that he will continue to protest during the anthem, policy or no policy.

Casey told CNN: “I’m going to take a fine this year. Why not? I’m going to protest during the flag.” (July 18)

Where pro football is concerned, standing for the U.S. national anthem first began in 2009. Before that time, players stayed in the locker room during the anthem.

Then, between 2011 and 2014, the Department of Defense gave the National Football League $6 million for “paid patriotism” during the playing of the anthem — a policy that also extended to baseball, basketball, hockey and soccer games.

The ongoing impact of Colin Kaepernick

The new NFL policy stems from the heroic protest begun by former 49ers quarterback Colin Kaepernick, who took a knee during the anthem throughout the 2016-17 season to protest racist police brutality and social injustice in general. He began his protest in August 2016 during preseason, a few weeks after the fatal shooting of two Black men, Alton Sterling and Philando Castile, by white police officers.

When protests spread to other teams, bigot in chief Donald Trump publicly attacked the players. In September 2017, during a Republican rally in Huntsville, Ala., he called the players “SOBs” and demanded owners fire them for “disrespecting the flag.”

Kaepernick made it clear that his protest was not against the flag or the military, but to help raise awareness of white supremacy that the flag represents, past and present, in the U.S.

While many Black players have faced a barrage of racist epithets and even physical assaults from white fans for taking a knee or simply for playing while Black, the opposite behavior has been displayed toward white racist players. A white Milwaukee Brewers baseball player, Josh Haden, recently admitted he tweeted racist and homophobic messages as a teenager. Yet he was given a standing ovation before a majority-white home crowd in Milwaukee — a thoroughly segregated city where Black youth, including Milwaukee Bucks basketball player Sterling Brown, have been brutalized by the police.

Kaepernick was released from the 49ers at the end of the 2017 season and has not played since, even though he led the 49ers to the Super Bowl in 2013. Many socially conscious players like Michael Bennett and Malcolm Jenkins have voiced the opinion that Kaepernick has been “blackballed” by the majority-white owners for taking a public stand against racism. Kaepernick has filed a grievance lawsuit of his own against the owners, charging them with collusion for refusing to allow him to play.

The Miami Dolphins issued a July 26 memo stating that any player protest would be grounds for suspension, not just fines.

After the new owners’ policy was passed in May, Jerry Jones, the billionaire owner of the Dallas Cowboys, the richest NFL team, said that he would not allow anyone on his team to even stay in the locker room during the anthem. Jones, who has had multiple sexual misconduct lawsuits filed against him, stated at a press conference: “Our policy is you stand during the anthem, toe on the line.” (USA Today, July 25)  It comes as no surprise that Trump praised Jones’s stance on Twitter.

The irony of Jones’s statement is that, except on the Sunday after Trump’s “SOB” rant, not a single player from the Cowboys protested last season. Only time will tell if some of these players decide to rebel against Jones’s scare tactic by taking a knee to wield their power.

Philadelphia Eagles safety Malcolm Jenkins called Jones a “bully,” while expressing solidarity with any Cowboys player who wants to protest.

The Eagles, currently Super Bowl champions, were disinvited by Trump to a White House visit when many of them stated they didn’t want to go there in the first place.

Many sports analysts claim that Trump has instilled fear in the NFL owners and that he is seeking revenge after some owners denied his bid to buy the Buffalo Bills decades ago.

But as sports writer Dave Zirin stated in a recent column: “NFL owners don’t fear Trump. They fear their own players.” (The Nation, June 13)

The bosses live in constant fear of their workers going out on strike or on a work stoppage for higher wages and better working conditions. The NFL owners are bosses who understand that players, as workers, can be a threat, costing them billions of dollars in profits if they withhold their labor power.

What distinguishes these players from the millions of other workers is that they can be seen on TV or live stream, on the sidelines and on the field on a Monday, Thursday, Saturday or Sunday, whenever games are played. Some may make huge salaries, but their work-life is very short, and they are in constant danger of work-related injuries.

The owners already lose sleep about the threat to their profits from increased player injuries, especially head trauma that ends playing years and lives. This and other factors, including Kaepernick being denied the right to play, also threaten a loss in fan base, which in turn affects the bosses’ profits.

But undoubtedly the bosses’ biggest worry is players rebelling for the right to express their political views, especially if those views reflect the communities where Black and Brown youth face police terror and mass incarceration.

Many of the players were lucky enough to escape these intolerable conditions due to their extraordinary talents and skills — and now they are ready to protest.