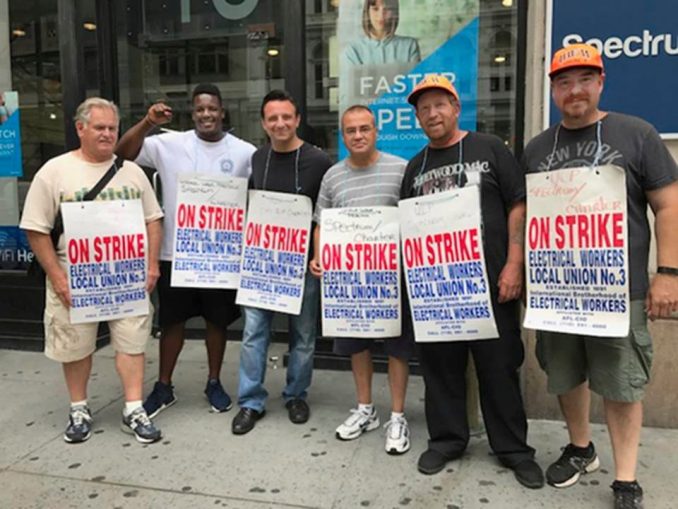 The PSC’s news release read: “Charter, doing business as Spectrum, has — through word and deed — made clear that it has no intention of providing the public benefits” on which the PSC based its approval of the merger on Jan. 8, 2016. The PSC also ordered Charter to pay $1 million to New York for missing its deadlines. “Charter is not interested in the public good,” the PSC said, just in “lining its pockets.”

Spectrum had agreed to deliver broadband speed of 100 Mbps statewide by the end of 2018 and 300 Mbps by the end of 2019. It also had agreed to build out its networks to underserved homes and businesses in less densely populated areas of the state. Although Spectrum was only 40-percent compliant, it launched an advertising campaign boasting of its high-speed networks.

Striking cable technicians at Spectrum lit up the Twitter networks when they learned of the rescinded merger. On strike for better working conditions for over 15 months now, the technicians cheered when the PSC voided the merger. They saw this as a decisive blow to Spectrum management’s arrogance.

“They were out to break the union,” a member of International Electrical Workers (IBEW), Local 3, told this reporter. “We had a working relationship with Time Warner. Spectrum’s first move was to lay off the management employees they considered to be ‘union sympathizers.’”

Spectrum has 60 days to submit “a plan to ensure an orderly transition to a successor provider(s).” No direct mention was made of the 1,800 strikers. However, one of the instances of misconduct cited in the decision was “unsafe practices in the field.”

Prior to this decision, a group of about 50 striking technicians filed a business plan for a workers’ cooperative that would break Spectrum’s monopoly and benefit everyone. The workers had been part of a design and survey team tasked with bringing cable TV to areas of New York City where there is currently no service.

Troy Walcott, shop steward at Spectrum’s College Point facility and member of the design team, told Labor Press: “We know the system because we built it. The system was already crumbling and the infrastructure needed to be redone. … We’re saying instead of letting them do it, let’s start rebuilding it ourselves — the people who are going to be building it anyway.” (laborpress.org, July 25)

New York City Mayor Bill de Blasio expressed support for workers’ cooperatives at a town hall in Queens: “We are interested in more competition (in the cable TV industry) going forward. … We would like to hear if there is something we can do with the workers themselves — that’s really an interesting idea.” The City Council allocated $1.2 million in 2015 for development and cultivation of workers’ cooperatives, followed by $2.1 million in 2016 and $2.2 million in 2017. (laborpress.org)

Although Spectrum was clearly dealt a defeat by the PSC, it is unclear at this point how these events will affect the striking workers.