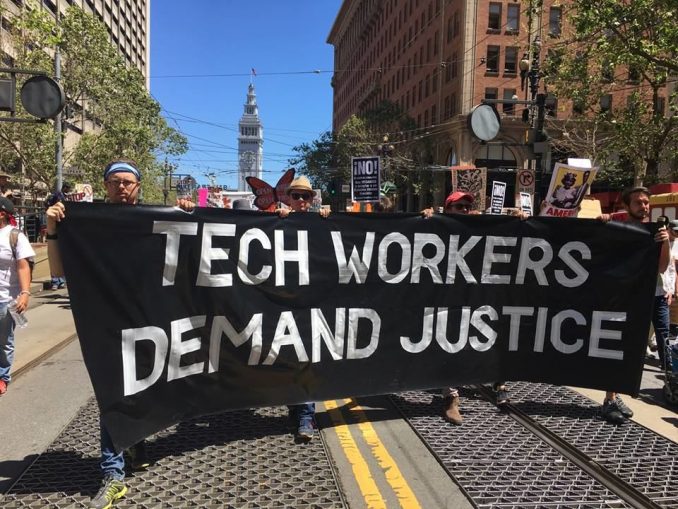 Workers at Microsoft used an internal question-and-answer session in late July to present CEO Satya Nadella with a petition signed by over 300,000 people.  The petition demanded an end to the tech company’s contract with U.S. Immigration and Customs Enforcement.

The petition points to Microsoft’s $19.4 million contract with ICE as part of a broader trend in the tech industry. It notes that Dell, Thomson Reuters, Motorola, Salesforce and Hewlett Packard all have ongoing contracts with ICE and U.S. Customs and Border Protection.

Microsoft insists that its Azure software, a cloud-based computing program that performs functions ranging from facial recognition to data collection, is not specifically being used to separate families. It’s obvious, however, that the tech giant has been caught in the act. Last January Microsoft bragged on its own blog that its software had become integral to ICE operations.

The recent confrontation between Microsoft workers and the company’s CEO is part of the broader struggle for immigrant rights. It involves a growing movement of tech workers as well as an emerging workers’ consciousness across various sectors of the working class.

While the movement for immigrant rights has been ongoing for decades, widely circulated reports of the Trump regime’s brutal policy of family separation have produced mass outrage. This has shown itself in large-scale rallies and marches across the country as well as in ongoing occupations at ICE detention centers, many of which have been met with police violence and repression.

What has become increasingly clear to broad sections of the working class is that politicians have neither the will nor the know-how to solve this crisis.

Since bourgeois politicians can’t provide viable solutions to the problems they themselves have made, the people have begun to take matters into their own hands.

Last week’s actions came a little over a month after more than 100 Microsoft workers published an open letter addressed to the CEO, calling for an end to any and all collaboration with ICE. Along with providing a list of grievances and demands, the letter stated:

“As the people who build the technologies that Microsoft profits from, we refuse to be complicit. We are part of a growing movement, comprised of many across the industry who recognize the grave responsibility that those creating powerful technology have to ensure what they build is used for good, and not for harm.”

This welcome development comes in an industry that has been famously devoid of organized labor. Many have written off Microsoft employees as decidedly not working class. But segments of contracted tech workers have been organizing, including tech cafeteria workers through UNITE HERE and janitors and bus drivers at Dell and Google through Silicon Valley Rising.

Now there are more signs of an emerging workers’ consciousness and bold displays of solidarity. The “growing movement” in the open letter to Microsoft refers to a string of worker-led campaigns inside some of the largest tech companies based in the United States.

In June Amazon workers published an open letter, “Dear Jeff,” to company owner Jeff Bezos, demanding that the company cancel contracts not only with ICE, but with all law enforcement agencies, including the police. The letter went so far as to compare Amazon’s actions to that of IBM, which collaborated with Nazi Germany to develop systems used to carry out genocide in the 1940s.

The Amazon letter follows the successful worker-led campaign within Google against the company’s involvement in Project Maven, which sought to develop artificial intelligence for use in drone warfare. After months of internal unrest, multiple petitions and over a dozen resignations of highly skilled workers, Google’s parent company Alphabet announced in June that it would not be renewing its contract with the Department of Defense.

Marxist political activists should welcome and support these growing displays of worker power in the technology sector. Even if these actions aren’t representative of the entire workforce of these companies, they indicate a sea change in workers’ political awareness. They also reveal the changing dynamics of who actually constitutes the working class.

The dynamics of class struggle are neither fixed nor immutable. They are relative to workers’ relationship to the means of production. If workers have to sell their labor to capitalists in order to survive, and capitalists in turn need to exploit workers in order to make profits, the workers can also be organized to apply pressure to those capitalists.

Marxists are correct, for example, to celebrate the recent string of teachers’ strikes from West Virginia to Arizona. Remember there was a time when teachers weren’t considered to be workers. The same economy that’s producing conditions that lead teachers to strike is producing conditions for tech workers to stand up against the criminalization of immigrants.