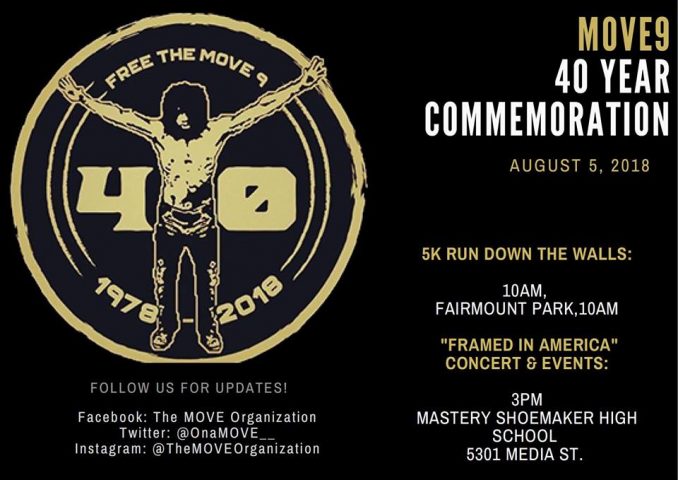 Earlier this summer, Philadelphia was in a state of celebration when political prisoner Debbie Africa was released after nearly four decades in prison. In August, prison abolitionists, in Philadelphia and across the world, will observe an anniversary with more solemnity than rejoicing.

August 8, 2018, marks the 40th anniversary of the city’s first major assault on the MOVE family, an episode that ended in the death of one of the family’s infants and in the arrest and imprisonment of nine MOVE family members.

To commemorate this anniversary, a three-part event will be held on Aug. 5. At 10 a.m., there will be a 5k run and walk that starts in Fairmount Park and goes to the original MOVE house in the city’s Powelton Village neighborhood. Then, at 3 p.m., there will be a public forum at Mastery Shoemaker High School on what today’s movements should learn from MOVE’s struggle. Following that forum will be a live concert at 5 p.m. featuring local artists Seraiah Nicole, Mic Africa, Raw Life Crew and more.

Michael Africa Sr., one of the MOVE 9, has a new parole hearing this September. Despite the fact that Janet and Janine Africa were also up for parole at the same time as Debbie, she remains the only member of the MOVE 9 to be released. Debbie was imprisoned in 1978 along with her partner Mike Sr., as well as Delbert, Phil, Janet, Janine, Eddie, Merle and Chuck Africa.

All nine were convicted of the murder of a Philadelphia police officer who died from being struck by one of his fellow officers’ bullets in the hail of gunfire the police blasted into the MOVE home. Despite forensic evidence and scores of eyewitnesses indicating the officer was slain by “friendly fire,” all nine of the arrested MOVE members were convicted of firing the single bullet that killed him.

Immediately after the police assault on the MOVE family, the city bulldozed and destroyed the house, annihilating any and all evidence that could have been used to help exonerate the MOVE 9. The demolition also erased all evidence of the police siege on the compound and the massive structural damage done to the house by police water cannons, chemical gas and thousands of rounds of ammunition fired into the home.

Despite all this, even the city had to acknowledge that of the few weapons that were recovered from the MOVE family home, none of them were operable. That is to say, the MOVE 9 had no way of shooting anyone. Yet each of the MOVE 9 were sentenced to 30 to 100 years in prison.

Judge Edwin Malmed, who handed down the bogus convictions, was asked by then reporter Mumia Abu-Jamal how it could be considered a just decision that nine people were convicted of firing a single bullet. Malmed replied that since the nine wanted to be tried as a family, he convicted them as a family.

A history of oppression — and resistance

The Philadelphia police assault on the MOVE family on Aug. 8, 1978, was a clear escalation of violence, brutality and injustice. But the war on the Philadelphia Black Liberation movement had been raging for at least a decade before. The generalissimo who prosecuted that war was Frank Rizzo, the white supremacist police commissioner turned mayor.

A major attack on Black Liberation began in August 1970 when police raided the Philadelphia Black Panther headquarters. Dozens of Panthers were publicly stripped naked on Columbia Avenue before their arrest. In that era of Cointelpro infiltration, intimidation and assassination, the Philadelphia chapter of the Black Panthers was just one of many to go underground or be destroyed outright.

The MOVE Organization, led by the visionary John Africa, is what filled the vacuum left by the Panthers in Philadelphia. With an ideology that combined an uncompromising dedication to Black Liberation with an unprecedented commitment to environmental justice and animal rights, MOVE became a revolutionary force to be reckoned with.

In a recent interview in Workers World, Debbie Africa explained: “[My brothers] got involved in MOVE activities, in speaking engagements — at the time they were in full throttle speaking out against injustice. They loved it, taking care of the dogs and going to study sessions that MOVE founder John Africa held, educating people how to avoid violence in their communities and on police brutality — the things that made people’s lives miserable.”

She added: “John Africa’s teachings really lock you into the reality of what’s really going on. The rest is history.”

For years, the city attempted to lock up members of the MOVE Organization. But John, and later Ramona, Africa’s remarkable legal astuteness meant they often escaped serious charges. That changed in 1978, when weeks of siege on the MOVE house culminated in the Aug. 8 assault and the imprisonment of the MOVE 9.

Three years later, Black Panther journalist and MOVE supporter Mumia Abu-Jamal was also framed for the murder of a Philadelphia cop. A key witness to that incident was found dead under mysterious circumstances on May 13, 1985 — the same night that Philadelphia police dropped a bomb on the new MOVE house on Osage Avenue, killing eleven people, including founder John Africa and five children.

In the years since the 1978 assault and the 1985 state murders, the MOVE family has flourished and grown, despite mainstream media accounts to the contrary. Still, the city’s oppression has taken its toll. Mumia Abu-Jamal and six of the MOVE 9 are still in prison after 40 years. Merle and Phil Africa were murdered by the prison system — they died under lock and key.

This fortieth anniversary must mark not just four decades of resistance, but also a new chapter in that struggle.