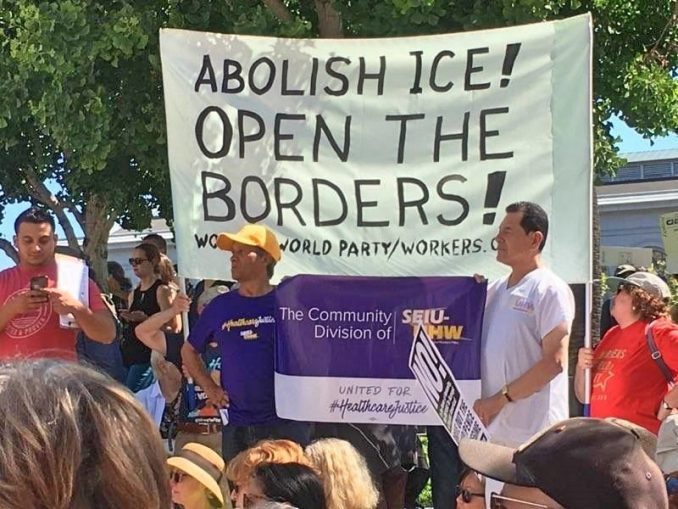 The Trump administration’s racist war on im/migrants continues. They are stopped and arrested at the Texas/Mexico border, as well as throughout the U.S. Hundreds of children are still separated from their parents. But resistance continues in the streets, outside Immigration and Customs Enforcement facilities and in the courts.

Generous assistance to migrant families is flowing from sympathetic organizations and individuals. They understand that their sisters and brothers from Central America are fleeing desperate situations of violence and extreme poverty — and that no one would attempt the dangerous trip to the U.S., risking probable arrest, unless they saw no other solution to their plight.

Border Patrol officers have seized 2,551 children from their parents at the Mexico/Texas border since last summer; this practice escalated in the spring. On April 6, Attorney General Jeff Sessions announced a “zero tolerance” policy to stop migrants from crossing the border. Government kidnapping of children intensified after May 7, when Sessions said all migrants and asylum seekers, even those with children, would be criminally prosecuted and families could be separated at the border.

On June 20, the American Civil Liberties Union filed a federal lawsuit in California challenging family separations. Federal Judge Dana Sabraw gave the government until July 26 to reunite all migrant children with their parents.

On July 27, the ACLU refuted the government’s claim in court documents that it had met the “court-ordered July 26 deadline to reunite the children it wrongfully separated from their parents. It did no such thing … hundreds of children were not reunited. Some 463 parents were deported without their children — and the government isn’t even trying to reunite them.” (tinyurl.com/yan2vb42)

The government didn’t give the ACLU lists of those facing imminent deportation. According to the ACLU, officials assert they will “immediately deport all parents who have final deportation orders once they are reunified … even though many of those parents may have mistakenly given up their asylum claims.”

On July 27, the government said 711 children were “ineligible” for reunification, but immigration officials had already deported over 400 of their parents! Judge Sabraw said the government was “at fault” for deporting parents while their children were in custody and for not having a reunification plan. He ordered the government to provide information by Aug. 1 on all deported parents, those missing in the U.S. or others deemed “ineligible” so they can all be reunited quickly.

The ACLU says the government claimed that 206 parents waived their right to reunification with their children by signing waivers or orally consenting. The majority of them face immediate deportation. Many parents want their children returned, but didn’t know they had relinquished their right to be reunited. Reportedly, border agents coerced, pressured, tricked and lied to get parents to sign the waivers.  Forms were not available in their native languages; some parents didn’t know what they signed.

The ACLU vows to get attorneys to find missing parents and provide them with legal help. A plethora of lawsuits are underway on behalf of migrant adults and children.

Efren C. Olivares, director of the Texas Civil Rights Project, said, “The government would like the public to believe it successfully met the July 26 deadline; nothing could be further from the truth.” (New York Times, July 28)

Many parents and children are in “legal limbo.” Some wait for days to be reunited, are sent to the wrong location or are even reunited with the wrong child. The secretive Department of Health and Human Services won’t reveal children’s locations or conveys inaccurate information.

Now ICE is attempting to coerce newly reunited families to withdraw applications for their children to stay in the U.S., reported Vox on July 29.  Where fathers would not relent, ICE agents yelled at them, refused their requests and/or separated them from their children for a second time.

Federal agencies are banning deportees from returning to the U.S. to get their children, and will “vet” parents before sending their children to their homelands. 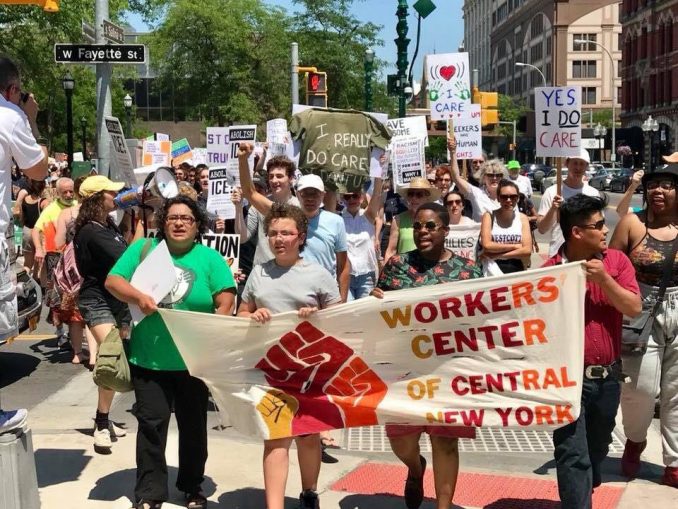 Among the worst of the U.S. government’s crimes is the mistreatment of children in detention and border processing centers. Lawyers, health care workers and others report inadequate water; inedible, often rotten food; and lack of blankets in cold temperatures. Some children were housed in cages. Some were not bathed. A parent said her returned toddler had lice. In many facilities, adult caregivers are prohibited from hugging children to comfort them.

There is also sexual abuse. The Nation’s website reports that a six-year-old girl, separated from her mother, was sexually abused by an older child at a Southwest Key detention facility in Arizona.  Outrageously, this child had to sign a form saying it was her responsibility to stay away from the abuser and “maintain appropriate boundaries.”

Children are suffering from anxiety, depression and feelings of abandonment. Some are acting out their anguish and anger at their parents. Some reunited parents have said their children don’t recognize or won’t talk to them or let themselves be hugged. Some youngsters will suffer longterm psychological damage and post-traumatic-stress disorder. Emotional pain and distress also plague parents when detained and those dealing with traumatized children after reunification.

Ever since the separation of migrant families escalated in the spring, there has been active opposition. A groundswell of resistance arose against the Trump government’s inhumane policies. The president had to publicly withdraw the family separation practice June 20 after a global outcry.

Some 600 people, mainly women, were arrested June 28 while occupying the Senate Office Building in Washington. Nationally coordinated protests took place in at least 700 locations June 30 initiated by Families Belong Together.

A Fight for Im/migrants and Refugees Everywhere (FIRE) delegation joined demonstrations in Brownsville and McAllen on the Texas/Mexico border. FIRE and Workers World Party have protested in many cities. Many “Abolish ICE!” pickets and occupations have taken place at the inhumane agency’s local facilities. Government officials have been confronted in offices, restaurants and on the street.

Migrant detainees staged a hunger strike in the Bristol County House of Corrections in Massachusetts and were joined by other prisoners in solidarity. Officials retaliated, but a rally outside supported those incarcerated. Women at the Port Isabel ICE facility in Texas fasted to gain phone calls to their children.

Legal, humanitarian, im/migrant, advocacy and faith-based organizations and compassionate individuals are showing solidarity and helping migrants.  Some are traveling to Guatemala, Honduras and El Salvador to locate parents who were deported without their children and offer legal assistance.

Sympathic volunteers — multinational, multigenerational, multigender and working class —  are helping countrywide. Women are driving migrant parents hundreds of miles to reunite with their children. Individuals are standing outside detention centers with money, food, bus tickets and legal aid for the released immigrants. Local fundraisers are being held.

Refugees and Immigrant Center for Education and Legal Services (RAICES) in Texas is offering to pay bonds for the release of women immigrant detainees and is uniting families.

The tremendous surge of support for immigrants shows the bond of solidarity between working people of all nationalities. The power of that solidarity exists as a material fact in their shared struggles against the brutal oppression dealt out by capitalism.