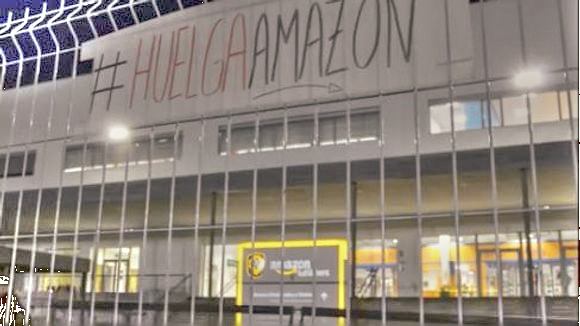 Posted by Spanish union members at an Amazon fulfillment center near Madrid, this sign calls for #HuelgaAmazon/#Amazon Strike.

Amazon’s biggest sales day of the year is now Prime Day, a two-day online shopping spree that this year falls on July 16 and 17. Begun four years ago, the sale is expected to haul in $3.4 billion for the company in 2018, up from an estimated $2.4 billion a year ago. (Washington Post, July 16)

But on this Prime Day, Amazon workers represented by unions in Spain and Germany slashed Amazon profits by going on strike. As the workers withheld their labor — and the company site got hit with an unexpected computer glitch — financial analysts lamented the negative impact on Amazon’s business.

Amazon’s service workers are represented by Comisiones Obreras in Spain and Verdi in Germany. European labor unions have been aggressive in demanding workers’ right at Amazon’s warehouses.

Usually, European warehouse workers strike Amazon during the winter holiday season. According to the Washington Post, hundreds went on strike in Italy and Germany in November 2017, saying they were under “high pressure to create more and more, in less time.”

Reinforcing the European unions’ call to boycott Amazon on Prime Day, international worker solidarity was put in motion by several U.S. advocacy groups, including the Action Center on Race and the Economy. They appealed to workers and consumers to boycott Amazon on the #PrimeDayofAction and to refuse to shop at Amazon-owned Whole Foods Market. The groups are also calling for a boycott of Amazon because of its sale of Nazi, Confederate and white supremacist items through third-party sellers.

For conditions of Amazon workers in the U.S., see Workers World’s interview with an Indiana worker at an Amazon warehouse: tinyurl.com/y7pg9hx9.