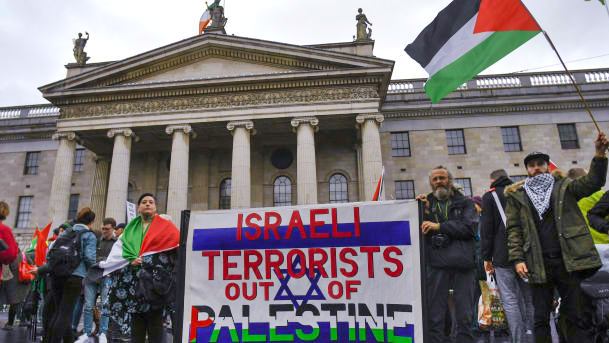 Protesters during a rally organized by the Ireland-Palestine Solidarity Campaign (IPSC) on Dublin’s O’Connell Street, 2018.

Seanad Éireann, the Senate of Ireland, passed the Control of Economic Activity (Occupied Territories) Bill 2018 on July 11, which, if enacted, would make the purchase of goods and services from the Palestinian territories occupied by Israel illegal in the Republic of Ireland — the 26 southern counties not currently subject to British rule.

To become law the bill must also be passed by the Dáil, the lower house of the Irish parliament. Nonetheless, the passage by the Seanad is, in addition to being a significant step toward implementing the law, a symbolic victory and a testament to Irish-Palestinian solidarity. It also sets a precedent for transforming international consensus of the illegality of Israeli settlements into action.

While the right-wing Fine Gael government, currently in power, is opposed to the bill, it has otherwise enjoyed wide support. Along with Independent senators, like bill-sponsor Frances Black, the legislation was endorsed by members of Sinn Féin, Fianna Fáil and the Green Party.

The widespread support for the bill reflects the pervasiveness of Irish-Palestinian solidarity that stems in part from shared history and the material reality of settler colonialism. The causes of both Irish and Palestinian liberation are firmly rooted in the struggle against British imperialism.

Winston Churchill, who was British prime minister during World War II and then 1951-55, was central in the formation of the Black and Tans and the Auxiliaries earlier in his political career. These are two British police forces used to terrorize and subject the Irish people to colonial rule. He also sent members of these state terrorist organizations to Palestine, where they treated Palestinians with similar brutality.

There are other cases of members of the British ruling class playing a repressive role in both Ireland and Palestine. Arthur Balfour served as chief secretary of Ireland, where he earned the nickname “Bloody Balfour” after ordering police to fire on a protest in Mitchelstown, County Cork, which killed three participants. He would go on to become the foreign secretary and author of the Balfour Declaration — a letter that established British intentions to prop up Zionist colonization of Palestine. (“Balfour’s Shadow: A Century of British Support for Zionism and Israel” by David Cronin, Chicago: University of Chicago Press, 2017)

The parallels of ethnic/religious inequality, colonial expansion, partition, internment and violent repression were, in part, a result of conscious and concerted efforts by the British. As a stronghold of British imperialism in the Middle East, Israel was regarded, in the words of a British governor of Jerusalem before it was established, as a “Little Loyal Jewish Ulster.”

Ulster is the part of Ireland still occupied by Britain, also known as the Six Counties. It was a stronghold for British imperialism, Loyalist colonization and occupation of Ireland. The settler colonial system of appropriation and dispossession was replicated and in some cases transplanted from Ireland to Palestine.

Although many in the U.S. see the struggle for Irish freedom as having been resolved, the conflict is far from over. The British ruling class and its bigoted colonizers exercise direct rule over many Irish people in the north of the island.

With “marching season” — an annual show of Loyalist, anti-Irish aggression from April to August — underway in the occupied Six Counties, located in the province of Ulster, the reality of settler colonialism and imperialism is again laid bare for all of Ireland. Loyalists have recently attacked the nationalist community of Short Strand in Belfast — including throwing a pipe bomb in an area where children had been playing moments before. (tinyurl.com/y6u3hrkc)

In Derry the Royal Ulster Constabulary/Police Service of Northern Ireland, an imperialist police force that has a long history of terrorizing the Irish community, have also attacked youth with potentially lethal plastic bullets — hitting one teenager in the throat.

It is in the material reality of this continued struggle and the history from which it emerges that the Irish and Palestinian causes are bound.

In response to the Seanad’s support for the Occupied Territories Bill, Israeli Defense Minister Avigdor Lieberman has called for closure of the Israeli embassy in Dublin. Defense ministry spokesperson Emmanuel Nahshon also said the Irish Senate’s act of solidarity was playing into a “dangerous and extreme anti-Israel boycott initiative.”

The bill, however, would only outlaw goods produced in territories that are internationally recognized under the Fourth Geneva Convention as being illegally occupied. Under the two-state consensus, the bill would not entail a boycott of all goods and services produced by Israel; it only bans imports produced in Israeli settlements in the West Bank.

Israel’s mischaracterization of the bill as a boycott of Israel is completely in character with a state that also lies by accusing those who speak out against its continued campaign of ethnic cleansing of being anti-Semitic.