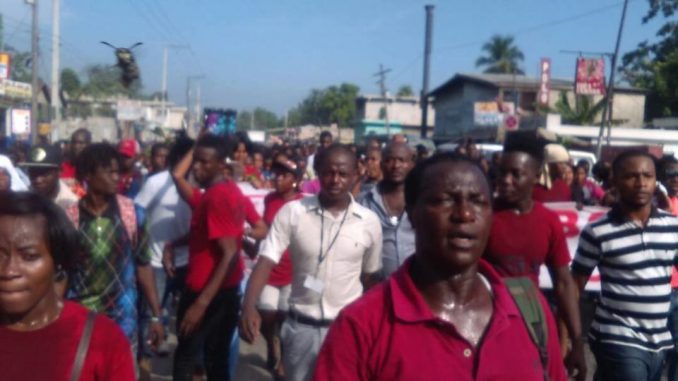 Politicians in Haiti thought they had a bright idea. Since people were following the World Cup soccer match between Brazil and Belgium on July 6, rooting deeply for Brazil, they would choose that time to obey the International Monetary Fund and raise the price of fuel by 38 percent for gasoline, 47 percent for diesel and 51 percent for kerosene.

This attack on the living standards of the masses, they thought, would be ignored in the jubilation and joy over Brazil’s victory.

But Brazil lost. Within minutes the masses were in the streets, erecting and burning barricades of tires, car bodies, debris and garbage to block traffic of cars and motorcycles. Whole neighborhoods in Port-au-Prince — Pétionville, Delmas, Lalue, Nazon, Champs-de-mars, Canapé-vert — were made inaccessible. Protesters also took to the streets in such cities as Cap Haïtien, Petit Goâve, Cayes, Jérémie, Jacmel and l’Artibonite. In Petit Goâve the courthouse was burned and the entryway to the tax office was set on fire.

In well-off neighborhoods of Port au Prince and Pétionville, luxury cars and apartment buildings were singled out, as well as offices and supermarkets constructed after the devastating 2010 earthquake with money that had been designated to rebuild the country. A particular target was the splendid and super-luxurious Royal Oasis Hotel in Pétionville, which got $2 million from Bill Clinton out of funds supposedly for reconstruction.

Because of the popular anger running through the streets, the barricades and the attacks on cars and offices, a number of airlines canceled flights to Haiti. The U.S. Embassy ordered its staff to shelter in place and sent for a special squad of Marine security. The Canadian Embassy also stepped up security.

Al Jazeera on July 14 reported that seven people had lost their lives in the struggle, while other news sources, like Haïti-Liberté of July 11, reported just a few dead, one a cop attempting to clear a barricade.

According to the Miami Herald of July 7, damage to fiber optic lines caused many cell phone and internet users in Port-au-Prince to lose service. A call for a general strike on July 7-9 was widely followed, even though it was not clear if a particular union was involved or just an ad hoc committee trying give some leadership to the struggle.

Marie Laurette Numa writing in the July 11 Haïti-Liberté made a very interesting point. Cops were so scarce in Port-au-Prince that there weren’t enough to protect all the goods of the bourgeoisie, which the masses were attacking. She had a possible explanation: “Some cops coming from the exploited masses have solidarized themselves with a cause linked to their class background, leaving the masses to cope with the country’s rapacious vultures.”

While this struggle doesn’t have a clear, established leadership, it has had a definite political impact. Prime Minister Jack Guy Lafontant resigned on July 14 after it became clear that merely withdrawing the fuel price increases wasn’t going to tamp down popular discontent. This effectively leaves Haiti without a functioning government, although soon an interim prime minister is expected.

Underlying this popular uprising is the extreme poverty of Haiti, which is by far the poorest country in the Western Hemisphere, and the rapacious greed of its ruling class.

According to the World Bank, which is one of the most important tools of world imperialist rule, 24 percent of all Haitians live under the  extreme poverty line of $1.23 a day, while 59 percent live under the “regular” poverty line of $2.41 a day. The wealthy Haitians who do the bidding of the imperialists receive so large an income that Haiti is rated the most unequal country in the world.

Haitians went into the streets because their conditions are intolerable and they are fighting to survive.