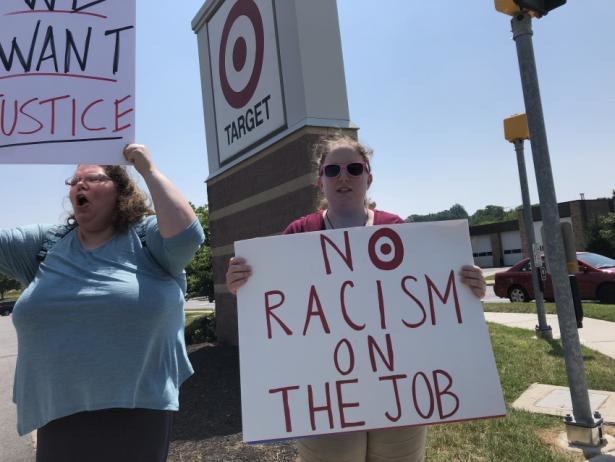 Under a red “No More Racist Bosses” banner, workers at a Target store in suburban Baltimore gathered inside the entrance on July 3 and then led a walkout and picket. The Target workers leading the struggle, Erica Feldenzer and Sarah Shifflet, laid out their demands to In These Times on July 6: firing the two managers “on the grounds of unprofessionalism and making racist and ableist comments about team members repeatedly and talking down to them,” and that “workers receive fair hours each week so that they are not chronically scheduled outside of their availability.” Members of the Baltimore Teachers Union, Democratic Socialists of America and the community joined in the struggle.

This protest echoes last year’s action in late August when a group of Target workers struck in Christiansburg, Va., to oust a manager who made racist remarks and sexually harassed Latinx workers. This strike turned into a victory two days later when Target removed the manager from the shop floor and placed him on leave pending investigation. (ITT, Sept. 1, 2017)

In response to the Baltimore struggle, Target issued a statement that management has been working to “take any allegations of workplace misconduct seriously” and “to address issues … and has already taken actions to address them.” (corporate.target.com)

Though the number of workers in the Baltimore fight is modest, the fact that Target employs over 350,000 workers worldwide, who obviously need union representation, makes this struggle significant.

When two Latinx tobacco workers spoke out recently about their harsh living and working conditions on Randy Blalock’s tobacco farm in Roxboro, N.C., the bosses harassed, abused and ultimately fired them. Now the Farm Labor Organizing Committee is sponsoring a petition to help fight their boss, his anti-union lawyer and tobacco buyers Reynolds as well as Alliance 1. FLOC is asking the grower to pay thousands of dollars in stolen wages and to compensate workers for their unjust and retaliatory termination. (floc.com, July 4)

This story reflects the experiences of many other tobacco workers who endure the risk of nicotine poisoning and dehydration, no freedom of association and no union, and an opaque supply chain. (IUF, July 6) Help FLOC win justice for these workers by signing the petition at tinyurl.com/flocblalock.

‘Panic buttons’ in all Chicago hotels

Starting July 1, licensed hotels in Chicago are required to provide panic buttons for designated female hotel workers, often women of color and im/migrants. Spokeswoman Sarah Lyons, speaking for UNITE HERE Local 1, which championed the “Hands Off, Pants On” ordinance and national campaign representing about 15,000 hospitality workers, said the button is “not just a physical device, but a symbol” of city support and the fight against sexual harassment.

Celebrating what representatives from Local 1, the Chicago Federation of Labor and city officials called a “cultural shift” for women worker’s rights, workers who “clean, inventory, inspect or re-stock supplies” alone in guest rooms or restrooms now have portable panic buttons so they can send out alerts if they feel threatened. Noting that this day marks “a culmination of a lot of hard work,” hotel worker Roushaunda said, “Today’s the day we say no more. Today’s the day we claim our space. We will feel protected.” (Chicago Sun-Times, July 2)

This is a decisive step in ending sexual harassment of working women. It should be implemented in all hotels and motels nationally as a vital part of the #MeToo movement.

In an email appeal signed by the Women of McDonald’s, Fight for $15 invites all fast-food workers who have experienced sexual harassment on the job to get help via their new hotline: 844-384-4495. The email notes that Fight for $15 stands with “the brave workers who have filed suit against McDonald’s for letting sexual harassment go unchecked in many of its stores.” Its message stresses: “You deserve to be heard. And you are not alone.” And the message adds: “No company should ever ignore — or worse, retaliate against — employees who speak up about harassment on the job. Period. When corporations shirk their responsibility to provide safe and fair workplaces, we stand up.” (fightfor15.org, July 13)