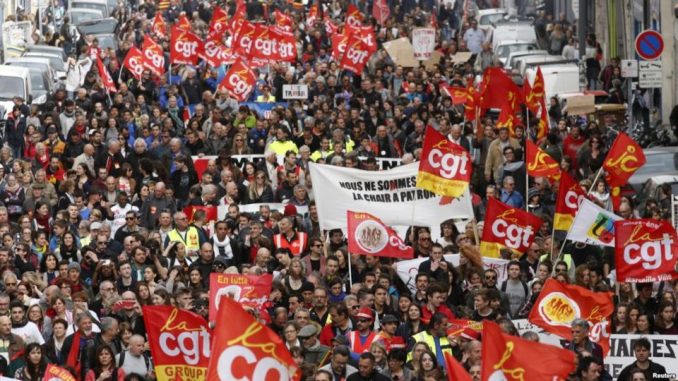 Paris, France, July 12 — The arrival of summer, synonymous with vacations, is eagerly awaited by all workers. Those eager include workers fighting for justice, who know their struggles will be placed on hold for two months until the start of the school year in September. This time, however, due to the social turmoil that has shaken the country since the beginning of the year, it is mainly the government that found time passing too slowly before the summer holidays.

In the halls of power, some are certainly convinced they have won the war. They mean the social war launched against the people by the capitalists — who on July 3 selected a pure descendant of the French nobility, Geoffroy Roux de Bézieux, to be the head of their employers’ organization (MEDEF) — and their devoted president and “monarch” Emmanuel Macron. Despite their convictions, everything indicates that the main confrontation is still ahead. Things are just beginning to get serious.

Neoliberal forces — those wanting to privatize everything and cut jobs — are already in battle order. They are ready for the next offensive, which will attempt pension “reform,” a new stage in the demolition of workers’ social protection.

For that task, they appointed a “high commissioner,” Jean-Paul Delevoye. He is a right-winger, a former minister under Jacques Chirac with more than 80 years of cumulative mandates in politics. He recently joined the current president’s party, La République en marche! Delevoye is charged with preparing a draft pension law that the government will present to Parliament in 2019 as part of the Action Plan for Company Growth and Transformation, called the PACTE.

Under the pretext of “harmonizing” pension plans by “aligning” public sector plans with those in the private sector, the aim is to promote retirement savings markets as called for by the banks and insurance companies. The proposal would freeze contributions, thus condemning pension balances to fall as the number of pensioners and life expectancy increase.

There will be no guaranteed pension levels for savers. These instead would be entrusted to the vagaries of stock market returns. Nor would savers be guaranteed recovery of their savings! It is indeed a hidden privatization of the pension system that is envisioned [something like a 401k in the United States].

In addition to capturing part of these pension savings, the proposal jeopardizes the financing of Social Security in France. Globalized finance — and pension fund managers, frustrated since the 2008 crisis by close to zero interest rates — are rubbing their hands like flies on a piece of sugar! After all, isn’t that why they choose Macron?

A fair system would guarantee everyone continuity of their best career standard of living when they move from work to retirement. The European Commission, the International Monetary Fund and the Organization for Economic Co-operation and Development recommend capitalization, that is, the kinds of steps in Macron’s “reform.”

Despite this recommendation, the French system still operates largely — and fortunately — on a pay-as-you-go basis. Current contributions finance current pensions and these contributions constitute future pension rights, thanks to intergenerational solidarity and the obligation for all who work to contribute. This pay-as-you-go regime, with guaranteed benefits, is secure because it is financed by contributions from wages throughout the country. This takes place without recourse to financial markets, and thus without the risk of a stock market catastrophe.

It is this solidarity that years of neoliberalism have weakened but failed to dismantle. It is this regime that President Macron wants to destroy as a service to the financiers. It is this pension system that workers in France will soon have to defend, to make it stronger and universal. Pensions do not present a demographic issue, based simply on the age distribution of the population, but rather a social justice issue. Society has a fundamental choice: either solidarity for all or each one for themself.

The ruling elites, arrogant and sustained by a balance of power historically favorable to capital, must nonetheless remember that, in 1995, the largest popular mobilizations since the general strike of 10 million workers in May 1968 were launched precisely to defend pensions. Powerful strikes paralyzed the country for more than a month (November-December) that year and, under the pressure of two million demonstrators, forced the government (then of Alain Juppé, Jacques Chirac’s prime minister) to abandon its “reform.”

But in 2010, under Nicolas Sarkozy, three million more demonstrators were not enough to stop the infernal neoliberal machine. How many millions will have to be in struggle in 2019 to force Macron to order a retreat?