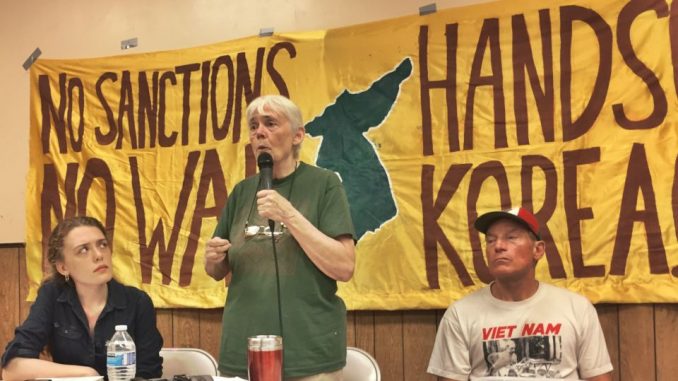 Griswold based her presentation on her firsthand experiences visiting the northern and southern regions of the Korean peninsula over several decades. She provided historical context to the current political climate, including the ongoing talks between the U.S. and the Democratic People’s Republic of Korea. She laid out an historical timeline beginning with the unsuccessful U.S. attempts at gunboat domination of Korea in the 19th century, the subsequent takeover of Korea by Japanese imperialism, the development of the Korean armed liberation struggle under Kim Il Sung’s leadership, the devastating bombings of the north by the U.S. during the Korean War, the division of the country engineered by the U.S. after World War II, the establishment of a U.S. puppet regime in the south, and the development of socialist foundations in the north.

Griswold condemned the intimidation tactics employed by the U.S. against the DPRK, including military wargame exercises and open calls for the DPRK’s annihilation, as well as the expansion of Camp Humphreys, the largest U.S. overseas military base in the world.

Refuting the widespread lies about DPRK aggressiveness and emphasizing the vast difference between the roles of the U.S. and North Korean military, Griswold challenged the audience: “When have you seen a DPRK soldier outside the DPRK? Where have you seen DPRK weapons deployed outside that country? You haven’t because all their soldiers and weapons remain in the DPRK. They are there to protect their country, not to spread aggression.” Griswold added that the DPRK’s nuclear program serves solely as a deterrent and has thus far proved effective.

Griswold also emphasized the perspective of the South Korean people, who are largely supportive of peace with the DPRK, reject U.S. provocations and seek to reunite the peninsula. She described protests of tens of thousands in the south, which led to a significant change in the South Korean government last year and has forced the U.S. to the negotiating table. Even though South Koreans face imprisonment under their government’s National Security Act for publicly expressing any support to the DPRK, Griswold explained, their deep yearning for peace and unification drove many into taking a stand.

The forum was co-chaired by Stan Smith of Chicago ALBA and Katherine Cavanaugh of WWP. Maya Arcilla of Anakbayan also spoke, emphasizing the important links between the struggles against U.S. imperialism in the Philippines and Korea.