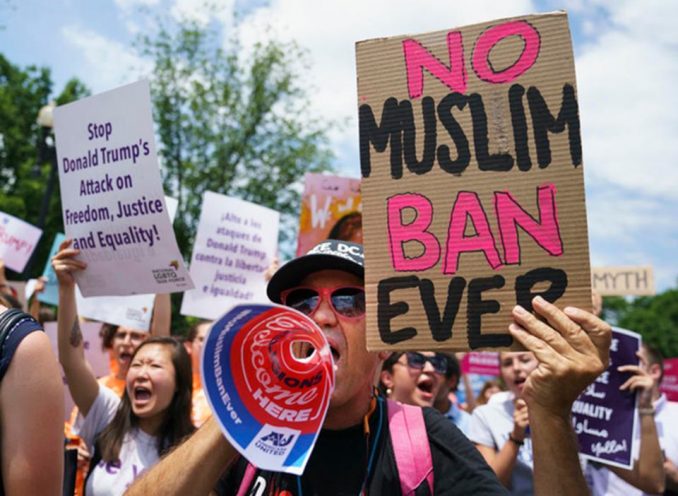 During its last sessions, the U.S. Supreme Court exposed its reactionary bias by deciding against workers, women and the Muslim religion. The court’s majority tried to cover this up with constitutional verbiage, but even its own minority answered this fraud. Justice Sonia Sotomayor’s dissent skewered the decision upholding the president’s “Muslim ban” of March 6, 2017.

The Islamophobic ban, which had been shot down by a federal judge in Hawai’i last year, is what led to this judgment. It bars entry into the U.S. by citizens of Iran, Somalia, Yemen, Syria and Libya. All these countries have a large majority of Muslim citizens. They are also countries where hostile U.S. policies and outright wars have created conditions forcing people to leave.

The order also bars entry to citizens of the Democratic People’s Republic of Korea and some Venezuelans who support the independence of their country from U.S. domination. While there is little doubt that Washington is also hostile to these individuals, they were included in the same travel ban as camouflage.

What Sotomayor argued, and was joined by Justice Ruth Bader Ginsburg, was that during his election campaign and throughout his time in office, Donald Trump has ranted against Muslim people at every opportunity, thus exposing his bias against that religion. She also tore apart the majority’s attempt to disguise the ban as necessary for “national security.”

“Ultimately,” Sotomayor wrote, “what began as a policy explicitly ‘calling for a total and complete shutdown of Muslims entering the United States’ has since morphed into a ‘Proclamation’ putatively based on national-security concerns. But this new window dressing cannot conceal an unassailable fact: the words of the president and his advisers create the strong perception that the proclamation is contaminated by impermissible discriminatory animus against Islam and its followers.”

There’s no doubt that this presidential order is one more wave in a torrent of repression and terror against all immigrants unleashed by the xenophobic president. Meanwhile, Democratic Party leaders are doing nothing to stop him. And now SCOTUS has again exposed itself as an enemy of the people. This is a joint ruling-class attempt to divide the working class on race and religious lines in order to weaken its struggle against exploitation and oppression.

So far, organizations defending the rights of Muslims in the U.S. have reacted not with despair but with a call to struggle. More important, they are joining with migrants and others under attack from the administration.

Omar Jadwat, director of the Immigrants’ Rights Project of the American Civil Liberties Union, said: “It is ultimately the people of this country who will determine its character and future. The court failed today, and so the public is needed more than ever. We must make it crystal clear to our elected representatives: If you are not taking action to rescind and dismantle Trump’s Muslim ban, you are not upholding this country’s most basic principles of freedom and equality.” (Fresno Bee, June 29)

Basim Elkarra, director of the Council of American-Islamic Relations–California Sacramento Valley/Central California, said: “The Trump administration has an anti-family agenda — and the Supreme Court just endorsed it. This ban has already caused tremendous suffering for countless families and entire communities. By upholding it, the justices are keeping spouses apart from each other and separating children from their parents. …

“The Muslim ban is part of President Trump’s larger, un-American war on immigrant families, including his administration’s inhumane separation of children and parents at the border. We will continue organizing, mobilizing and defending Muslim communities from bigoted policies — whether they are endorsed by the Supreme Court or not.”

CAIR joined with those protesting the government’s immigration policies on June 30 while pressing their own demands. Many of the existing pro-migrant-rights groups recognize the attack on Muslims as part of the attack on all migrants. Many of the signs carried by the June 30 marchers brought up the need to defend Muslim rights and strike down the ban.

This attitude of solidarity could also be seen among the descendants of World War II internment of Japanese people by the U.S. government, which also used the pretext of “national security.” In an act scaling the pinnacle of hypocrisy, SCOTUS reversed the 1944 U.S. v. Korematsu court decision that upheld the internment of people of Japanese origin.

Karen Korematsu, the daughter of the Japanese-American man named in the 1944 case, said, “For the Supreme Court to overrule my father’s Supreme Court case in this way, I feel like, dishonors him and all the civil rights work he did over the years.” (Time magazine, June 28)

The administration and the Supreme Court have taken brutal steps to oppress migrants, but the reaction of the people shows that these steps have aroused attention to the growing need to build solidarity with those targeted.