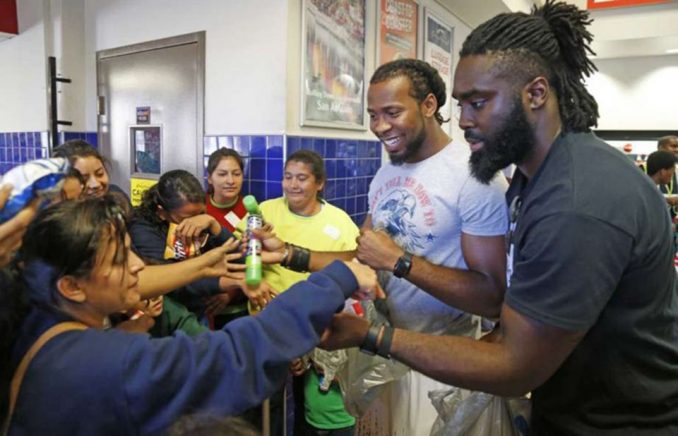 The Trump administration, along with its racist, repressive arm, U.S. Immigration and Customs Enforcement, has created an unprecedented humanitarian crisis for millions of migrant families. Tens of thousands of people in many sectors of society have expressed both their righteous outrage and heartfelt solidarity with the families.

One of these sectors is the National Football League, the most popular professional sport in the U.S. Last September bigot in chief Trump used the epithet “sons of b–ches” about NFL football players who followed Colin Kaepernick’s lead in taking a knee during the national anthem to protest police brutality and racist oppression.

Two African-American NFL players, Joshua Norman, a cornerback with the Washington football team, and Demario Davis, a New Orleans Saints linebacker, traveled to San Antonio on June 27 to assist RAICES Texas (Refugee and Immigrant Center for Education and Legal Services). There, close to the U.S.-Mexico border, the two players helped to buy and pack  clothes, medicines, food, water, toys and other vital supplies for at least 60 immigrant families, including children, who were recently released from detention centers.

Norman stated: “As a Black man in America, I know how this state treats minorities and people of color. I see it every day. Yesterday it was Muslims from certain countries, and today it’s immigrants. We don’t know who’s next. That’s why I’m here … to lend a helping hand to the people on the front lines fighting back in the courtroom and in detention centers. Seeing what’s happening with the kids and their parents, I felt like I couldn’t stand idly by. I needed to take action so I came out here with no questions asked and am here to help in any way I can. Packing backpacks all night last night was the best thing I’ve done all year.” (www.dailykos.com)

Through the NFL Players Coalition, Norman also donated $100,000 to hurricane relief in Puerto Rico, and Davis works with poor children in Jackson, Miss.