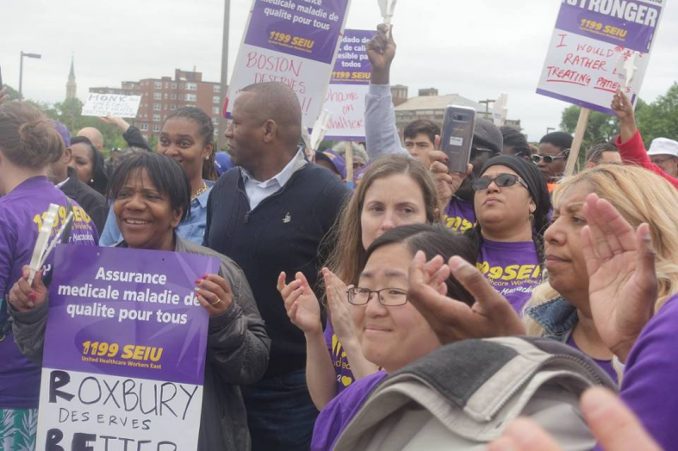 Boston — Over 100 workers and protesters rallied outside the Whittier Street Health Center in Roxbury, Mass., on June 15 to loudly reject the abrupt firing of 20 employee activists there. Hundreds more clamored on social media, spreading news about the firings that unleashed a torrent of anger in the community and among health care workers throughout the city.

By June 17, the outcry reached such a fever pitch that Boston Mayor Marty Walsh had to pressure the health center’s management to publicly commit to a reversal of the firings of staff. On June 18, however, fired workers who returned to the health center to attend an all-staff meeting were barred from the premises by threats of arrest issued by Whittier’s human resources director.

Whittier Street Health Center is a community health facility serving mostly low-income patients from Boston’s Roxbury, Jamaica Plain, Mattapan and Dorchester neighborhoods. Many employees who were inside the center on June 15 left work to join protesters outside.

The 20 fired employees have been active in an organizing drive for the center’s 75 health care workers — including nurses, medical assistants, doctors, mid-level providers and behavioral health workers — to be represented by Service Employees Local 1199. The firings came just five days before a slated vote for union representation on June 20.

Whittier’s Board of Directors, CEO and hired “union avoidance” experts targeted the organizing drive with an aggressive union-busting scheme in which workers had their badges unexpectedly deactivated on June 14 during patient exams and appointments. Patients were left waiting in exam rooms as 20 of the most vocally pro-union employees were directed to leave the building.

In a Monday morning statement issued June 18, management claimed the abrupt firings had been “unfortunate steps to stabilize Whittier Street’s financial future,” necessitated by “shrinking funding opportunities,” and that the equally abrupt reversal was arranged thanks to the “Mayor’s leadership and guidance … providing a pathway forward that would put Whittier on a stable financial footing for now.” But this media campaign was just a slick, face-saving maneuver. As of this writing, not one of the workers has been allowed to return to their jobs or see their patients.

The health care bosses have yet to set a reinstatement date for the fired workers. This stalling is just another attempt to rattle workers who have fought hard to unionize their workplace in order to win job security, maintain community control at Whittier and advocate for improved patient care. Management hopes workers will be intimidated into voting down the union on election day, or will at least stay home.

But no amount of back-peddling or public relations spin can hide the truth, which was patently clear to every front-line health worker in Boston: These firings were 100 percent based on the growing fear among health care industry corporate elites of the power of organized health care workers. The reversal of the firings, too, came as both politicians and health center upper management felt the fiery breath of an overnight union-community mobilization — not because of some benevolent act inspired by mayoral “leadership.”

Whittier employees, union organizers and community members know all too well that it is up to the power of the people to make sure that the fired workers truly get their jobs back and that the union election proceeds unimpeded. A coalition with broad community support has set an election-day rally to uplift precisely this crucial worker solidarity and support for a pro-union vote, which will be necessary to win back these jobs.