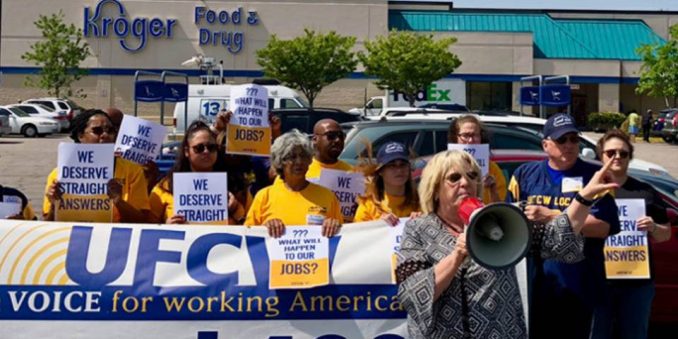 Workers protest to save Kroger jobs

A fight to stop possible job loss led hundreds of members of Food and Commercial Workers Local 400 to rally outside Kroger’s Mid-Atlantic Division headquarters in Roanoke, Va., on June 12. When the grocery chain announced it had bought eight Farm Fresh stores and would reopen them as Kroger, the company claimed they would extend jobs to all Kroger workers. But a Farm Fresh sits across the street from a Kroger in Norfolk, Va., and it was rumored that the Kroger would close, leaving the workers transferred or fired.

Flanking more than 300 UFCW members were five shopping carts stuffed with “Save our jobs” petitions requesting management keep their promise of jobs. To dramatize that, two clotheslines were strung up with 74 bright yellow union T-shirts — one for each job that would be lost — with a sign reading, “Don’t hang us out to dry.” (Roanoke Times, June 12) Though Kroger hasn’t yet responded, dramatic protest and rousing solidarity often win!

Oregon Institute of Technology and Oregon State University faculty delivered union authorization cards to the Oregon Employment Relations Board on June 5. They were the last of Oregon public universities to unionize. Under state law, public employees are automatically unionized once a majority of the bargaining unit sign cards.

The 172 full-time faculty, instructors and librarians at OIT became members of the American Association of University Professors. At OSU, the faculty of 2,400 joined the United Academics of Oregon State University, a joint project of AAUP and the American Federation of Teachers. AFT already represents graduate students, and support staff are members of Service Employees Local 503.

Organizing committee member Darrell Ross says OSU faculty want a greater say in university governance and better working conditions, which have steadily deteriorated. “There’s increasing reliance on contingent faculty, [who] have little job security, they’re not paid well, and they often don’t know until the last minute if they’ll have their contracts renewed.” The union drive accelerated when academics from the University of Oregon and Rutgers University described how their unions improved working conditions and job security. (nwlaborpress.org, June 12)

Imagine spending 10 days roofing luxury condos in 100-degree heat in Pittsburgh and the boss doesn’t pay you! That was the outrage driving a rousing rally there on June 9, when members of building trades and painters unions united to fight together with five Guatemalan roofers who hadn’t been paid $5,000 for their work last summer. They demand that Stapleton Homes, the project’s developer, pay up.

The rally marked the beginning of efforts by area construction unions to fight the growing trend of wage theft. Rather than pushing im/migrant workers away, buildings trades unions have begun to embrace im/migrant labor. “If we don’t step up and keep the pressure on [these contractors], they are just going to keep doing it,” said a Painters District Council 57 union representative.

One of the Guatemalan workers told Payday Report that the injustice doubly affected the immigrant workers: “It’s just wrong. We have kids, [and] I have more family in Guatemala. … It’s not fair that we didn’t get paid.” (June 11)

Workers are unstoppable once we uproot the myth that other workers are stealing “our” jobs — and we unite against the real enemy.

When a building boom began in Pittsburgh several years ago, exposing a shortage of skilled building trades workers — carpenters, plumbers, electricians, steelworkers, etc. — the mayor issued two executive orders, with the cooperation of the historically white- and male-dominated building trade unions, to recruit African Americans and women to become union apprentices. A once-closed trade school in a Black neighborhood was reopened for pre-union apprenticeship classes.

“This program changes people’s lives,” said Ron Sapp, a Black labor leader in Operating Engineers Local 66, who came out of retirement to become an instructor. He told Payday Report: “One of the good things about these [unions] is that you can have a record. … It’s no big deal.” Richard Broadus, a 46-year-old father of three who served five years for selling drugs, praised the program: “It’s given me a new outlook on life. Now I don’t have to do the same thing that I had to do before to provide for my family. I appreciate the opportunity to do better.”

Over the past four years, more than 300 students graduated from the program, with 90 percent able to test into union apprenticeship programs. As Payday Report observes: “The stability of a union card equates to lifetime job security for many young people.” (June 6)