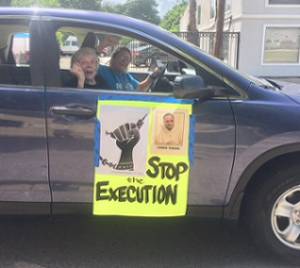 ‘Stop the execution of Christopher Young’ car in Juneteenth Parade.

The Juneteenth Parade, an annual event in Houston, memorializes the day in 1865 when the Emancipation Proclamation was put into effect, ending slavery across Texas.

This year it was celebrated on June 16. As the parade wound its way from Texas Southern University down Emancipation Avenue to Emancipation Park, the crowds were treated to beauty pageant participants, politicians, bands and community organizations.

But real emancipation was on the minds of many as the Texas Death Penalty Abolition Movement entry in the parade rolled by. It was warmly received with loud cheering, applause and fists in the air. Lots of photos were taken.

The contingent focused on several cases of innocent people on death row, including Big Lou Perez, Gerald Marshall, Tony Medina and Linda Carty. But the main focus of the Abolition Movement was on Christopher Young. There were posters and signs with a photo of Young along with his artwork — a graphic of a clenched fist crushing the needle of a lethal injection device.

Texas has set July 17 for Young’s execution, despite several jurors saying they voted to convict him because their god had told them that Young, who is African-American, should not have had a white spouse and two children with her.

Showing the blatant bias in jury selection, a member of the jury pool in Young’s case was eliminated because her church has a prison ministry, even though she was not part of it.

The parade ended at Emancipation Park, where the 146th annual Juneteenth Festival was in full swing. More information on Young’s case is posted at tinyurl.com/y8y7scrw/.