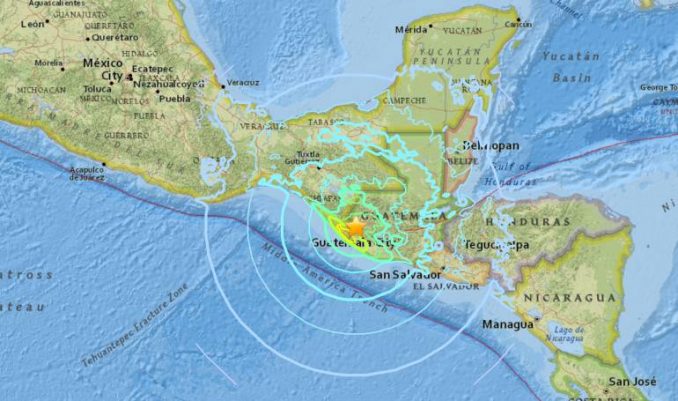 Thousands of Indigenous men and women marched on June 12 to the capital of Guatemala, organizing themselves into four columns to enter Central Park. They came in response to a call by the Committee for Peasant Development (CODECA) for a national strike to demand justice in the deaths of several human rights defenders from that organization. In the last month, five members of CODECA and several other peasant leaders not part of the organization have been murdered.

This action took place during a dangerous period in Guatemala, as the volcanoes of Pacaya, Santiago and Fuego are currently active. Fuego has already had several eruptions in recent weeks that devastated nearby villages and exacerbated the country’s political crisis.

Days before CODECA arrived in the capital, the city’s residents had taken to the streets to demand that President Jimmy Morales leave, blaming him for corruption and for failing to manage the damage from the volcano’s eruption.

In addition to demanding justice for the murdered defenders, CODECA called for the departure of the president and his cabinet. But they also called for the removal of the corrupt deputies from Congress. During the demonstration in the square, several leaders of CODECA and its allies proposed a referendum for a Plurinational People’s National Constitutional Assembly.

They opposed the so-called “pact of the corrupt,” which the ruling National Convergence Front (FCN) recently passed, taking advantage of the fact that the country had all its eyes focused on helping the victims of the eruptions. CODECA dubbed the government’s initiative “pact of the corrupt” because it was designed to grant impunity to the FCN from the ongoing investigations of illegal election financing.

As of June 16, the FCN deputies have been removed and the president is under investigation by the Supreme Electoral Court. Demonstrations have continued throughout the country in recent days.

In 2015, the Guatemalan people took to the streets and forced the departure of President Otto Pérez Molina, along with most of his ministers. That protest was a response to a crisis in social services caused by the uncontrolled theft of government funds by politicians and their friends in the oligarchy. The president resigned and the International Commission Against Impunity in Guatemala (CICIG) initiated legal proceedings.

What was missing in 2015 was a decisive alternative to the power of the military and the oligarchy that had ruled the country for so long. With the two major political parties discredited among the people by corruption scandals, Jimmy Morales, a popular comedian and candidate for a former military party, was brought to power.

What has been Morales’ approach to his presidency? Has it been to attend to social needs? Not at all. Since before the volcano erupted, the roads were in terrible condition, the hospitals had no medicine, and the country led Latin America in child malnutrition. Now, just as CODECA has warned, the country is about to tumble into a state of collapse.

As signs of this plunge, Jimmy Morales has proposed referendums to decide on the border with Belize, encouraged investment in the country of U.S. and European capital, and moved the Guatemalan Embassy in Israel to Jerusalem, days after Trump announced a similar U.S. decision.

As Mayan nations and peasants were mobilizing to help the victims of the eruptions, the government claimed there was “not a penny” in the budget. When trucks and individuals arrived from neighboring Honduras and El Salvador with help, they were not allowed to cross the border. Soon, the army took control of rescue operations, and now it is reported that donations at collection centers have not reached the victims.

In the months ahead, a major reconstruction campaign will be needed for disaster recovery. Although the oligarchy may ignore this need, they might also take advantage of the emergency by submitting luxurious contracts that benefit their corporations and foreign investors. As always, it will be the people who suffer.

The example of Puerto Rico and the ongoing destruction of the island’s public services should be a warning to the people of Guatemala. It is true that, unlike the Puerto Rican archipelago, Guatemala is not a formal colony of the U.S. But it is a neocolony, dominated by U.S. and European imperialism, which extract great profits from the country with the help of the oligarchy, which takes the leftovers.

Popular movement, an alternative to oligarchy

That needn’t be Guatemala’s future. As we have noted, the same popular forces who are mobilizing against the government have supported the rescue process.

Tens of thousands of dollars in donations have come pouring in from the Guatemalan diaspora and the international working class through a GoFundMe website (gofundme.com/helping-guatemalan-volcano-victims/donate).

These funds are available to local cooperatives to address the crisis. Cuba, a great example of international solidarity, has sent a brigade of doctors.

There is no reason why Guatemala should be as poor as it is when its fields have enriched the world with coffee, sugar, cotton and, above all, bananas. The colonial system was the primary cause of so much suffering, with this system now replaced by neocolonial imperialism.

The only force capable of resolving the current crisis to the benefit of the people will be that of the people themselves. Surely that’s because they recognize what CODECA demands: a Plurinational People’s National Constitutional Assembly.

That the process should be plurinational is as important as that it should be of the people. In a colonized country, where the nations that are the heirs of the Maya have always been the majority, but also the poorest and most oppressed, the people cannot advance without rectifying such injustice.

The only real way to reverse so many centuries of cruelty is with a popular social movement led by the most oppressed sections of the people.