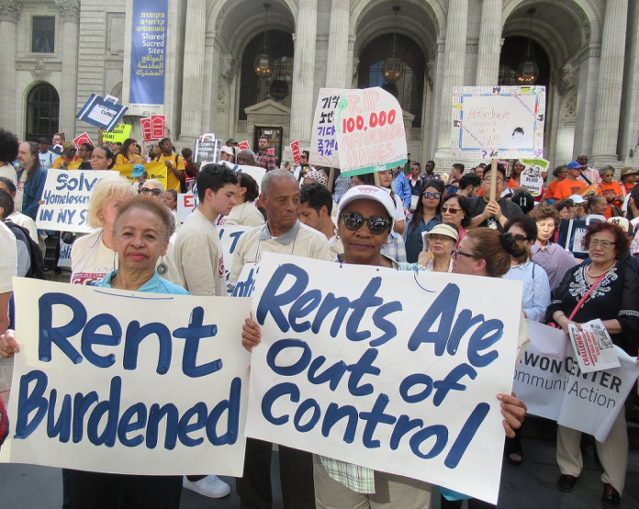 New York — Some 20 tenant groups brought at least 1,000 of their working-class members to rally on the steps of the Mid-Manhattan Library on June 14. The city’s rent-stabilized tenants have been attending hearings in every borough, appealing to the Rent Guidelines Board for a rent freeze. Speaking at least three languages, these multinational activists from three of the city’s five boroughs passionately explained their plight. Many wore colorful T-shirts with their tenant group’s name. A strong feeling of unity and solidarity emanated from the crowd, who knew that New York Gov. Andrew Cuomo was in town.

After rallying, and despite threats of arrest by the police, the tenants marched to Park Avenue, where Cuomo was to receive an award from some rich friends. The tenants chanted: “We work! We’re poor! Please don’t raise our rent no more!” and “Tax the rich! House the poor!” along with “¡El pueblo, unido, jamás será vencido!” A speaker active with Brooklyn’s VOCAL organization insisted: “We will not let the landlords and developers ruin our neighborhoods!”

Cuomo has a long history of doing nothing about the much-needed public housing for the working class and the growing number of homeless. He is silent on the racism perpetrated by realtors and developers.

While the New York City Police Department used their motorcycles to block the building where Cuomo mixed with his rich Park Avenue friends, the large, militant protest stood its ground for three hours, eventually proceeding to the front of the building. With tenants on both sides of the doorway, there was a prolonged “mic check” and then a very loud “Boo!” as security moved Cuomo’s car closer to the door. He couldn’t avoid seeing and hearing the protesters.

Cuomo ran to his car as tenants cheered their victory and demanded, “Cuomo! Get off it! Your system is for profit!”