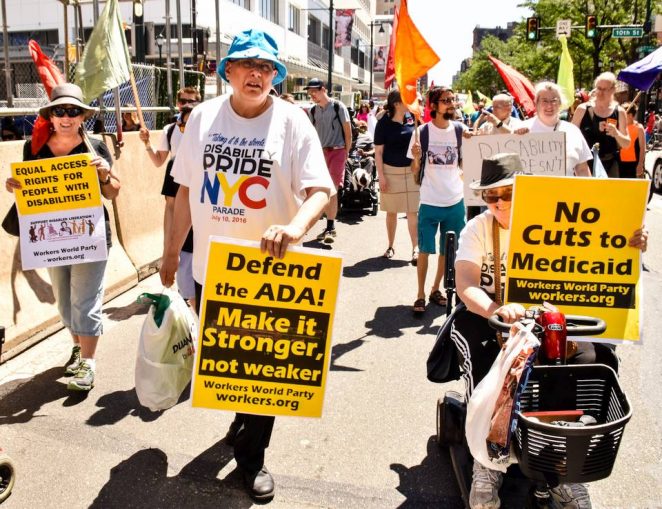 Philadelphia’s Disability Pride Week came to a spirited end with a parade in Center City on June 16. About 300 people walked, rode, rolled and scooted up Market Street to City Hall for a celebration with music, speakers and entertainment provided by artists with and without disabilities. An exuberant African-American wheelchair user rolled up and down the line with his cute dog, enthusiastically leading chants of “Disability Pride!” Large local puppets brought fun and festivity to the celebration.

It was the parade’s seventh consecutive year in a city that takes disability rights seriously. Mayor Jim Kenney told Uber officials that its private cab company would not be allowed to work in Philadelphia unless all its cabs were accessible for people with disabilities. The company complied. Subway stations here are much more accessible than in New York City. There were tables at the parade full of information on available resources from providers of services for people with disabilities, including the Philadelphia Mayor’s Office for People with Disabilities.

Feisty political sentiment was expressed at the parade. Disability Pride buttons and T-shirts displayed clenched fists. A black T-shirt was inscribed with the slogan “Piss on Pity.” Orange and pink stickers with black lettering demanded the removal of two of the U.S. government’s most notorious disability haters: “Trump and Pence Must Go!”

Several participants, including these two reporters, traveled from New York City to bring solidarity greetings from the NYC Disability Pride Committee, which is planning its annual parade on July 15. Disabled activists and their allies are engaged in a struggle with the New York City Police Department. They are seeking a return of the gathering site, parade route and festival venue to their originally scheduled spots, with the assembly point at Union Square Park and the festival at the well-shaded Madison Square Park. The NYPD reversed the locations at the last minute on May 31.

Under the police department plan, people would gather at Madison Square Park and hold the festival in the northern section of Union Square Park, which has no shade. On a hot July day, with the sun beating down, this is potentially dangerous. Many people with disabilities are extremely sensitive to heat and sunlight, which can cause serious injury, illness and even death.

Disabled people are entitled to a reasonable accommodation with a parade route and festival venue that do not endanger their health. Updates on this situation will be posted in WW as they develop. On to Disability Pride NYC!

Kaessinger is a wheelchair user. Yudelovich has emotional and hearing loss disabilities.