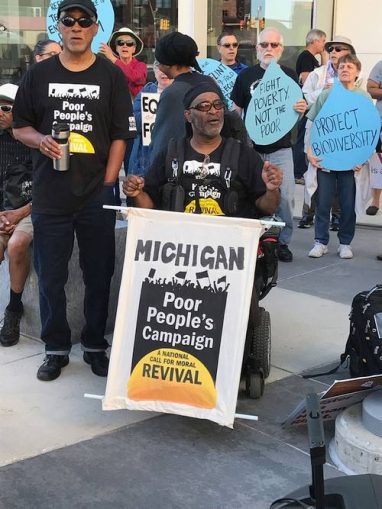 Lansing, Mich. — The Michigan Poor People’s Campaign action on June 11 was the largest yet. Some 500 activists protested in Lansing, the state capital, around the themes of “Education, Living Wages, Jobs, Income and Housing.” An especially strong and dynamic contingent of mostly young African-American workers from the D-15 movement played a leading role in the demonstrations.

The rallies at a church gathering spot and the Michigan Treasury Department, organized by the Moratorium Now Coalition and D-15, reflected a coming together of union and community activists. Speakers included disability rights activists Lisa Franklin from Warriors on Wheels and Baba Baxter. Helen Moore from the Vote No Takeover Coalition spoke on the education struggle.

City retirees Yvonne Jones, representing Moratorium Now, and Donald Roberts, from the Detroit Active and Retired Employees Association, discussed the war on public workers, and especially retirees in Michigan. Shannon Kirkland from the Communications Workers spoke on a potential Midwest strike against AT&T, and a representative of the Lecturers Union discussed their contract battle at the University of Michigan.

A United Auto Workers representative spoke on the fight of Colombian workers against General Motors. Jonathan Roberts rallied support for the One Fair Wage campaign, a referendum scheduled for a vote this November to lift the Michigan minimum wage for all low-wage workers and specifically to abolish the subminimum wage for restaurant servers.

The direct action included a sit-in, resulting in a number of arrests at the Michigan State Housing Development Authority. The sit-in supported a Moratorium Now Coalition contingent that went inside to demand MSHDA use the remaining $200 million in Michigan’s federal Hardest Hit Funds to keep families in their homes, as intended under the program.

In Michigan, the bulk of the Hardest Hit Funds are being illegally diverted to a corrupt blight removal program, administered by Detroit and Flint land banks. Moratorium Now is demanding that the funds be used instead to prevent the eviction of thousands of families from all the occupied homes facing tax foreclosure this fall.

Under the Moratorium Now proposal, the city or county would remove thousands of occupied tax foreclosed homes from the fall auction by exercising their right of first refusal. Hardest Hit Funds would be supplied to pay delinquent property tax bills, and the homes would then be turned over to the occupants, whether they are owners, renters, land contract vendees or even squatters. Based on the strength of the action on Monday, MSHDA agreed to present this proposal for agreement by the federal Department of the Treasury.

The Michigan Poor People’s Campaign action June 11 was part of weekly demonstrations that have occurred every Monday, beginning May 14, in over 30 state capitals across the U.S. The state protests will culminate with a national Stand Against Poverty Mass Rally & Moral Revival on Saturday, June 23, at 10 a.m., on the National Mall in Washington, D.C. For information about this national rally, go to poorpeoplescampaign.org.