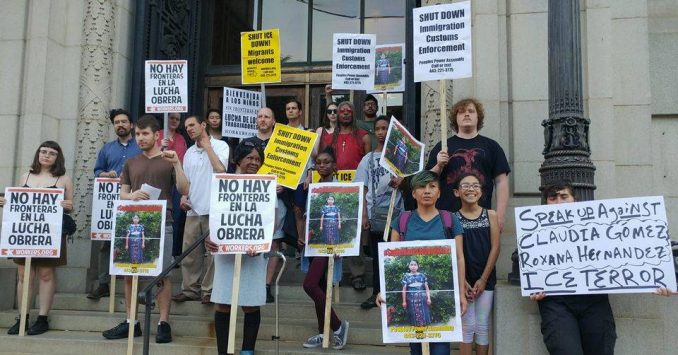 A very successful protest was held on the steps of the Baltimore field office of Immigration and Customs Enforcement on June 1, organized by the Baltimore Peoples Power Assembly, Workers World Party and Youth Against War and Racism. The protesters demanded justice for Claudia Patricia Gómez González and migrant children and youth, and that ICE be abolished.

Claudia Patricia Gómez González, a 20-year-old woman from Guatemala, was shot in the head and killed by U.S. Border Patrol agents on the U.S./Mexico border near Laredo, Texas, on May 30. She was unarmed.

Among the protesters was a young immigrant family, including a mother from Mexico, a father from Guatemala and their daughter. The father’s nephew had frozen to death attempting to cross the desert into the U.S.

The Facebook page announcing the event states that ICE “is forcibly separating children and babies at the border from parents. The Trump administration is making preparations to warehouse migrant children on military bases, according to ­Defense Department communications. …

“Recent investigations reported by Newsweek accuse custom and border control police of using stun guns on minors for amusement or punishment, kicking them and threatening to either rape or kill victims.”