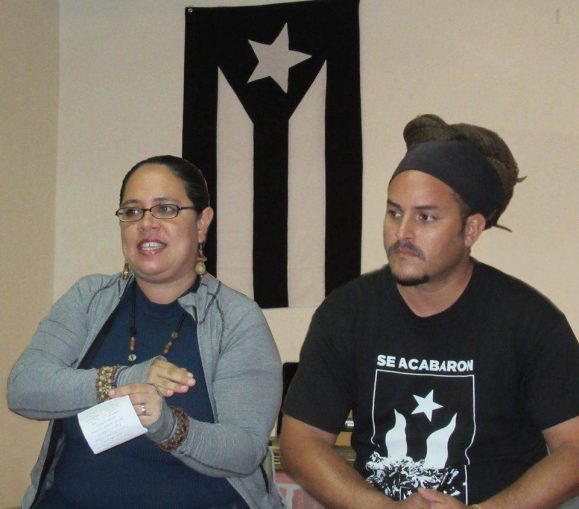 A new generation of revolutionaries shared their views with older ones at a program on Puerto Rico here on June 9, sponsored by the local ProLibertad Campaign and held at the Holyrood Episcopal Church in Manhattan’s Latinx community. Guests included Rogelio Maldonado and Jocelyn Velázquez with the Socialist Front of Puerto Rico.

Velázquez explained to the gathering that their bilingual umbrella organization stands against the loss of their culture, with a strong love of Puerto Rico’s history. She said that “Puerto Rico doesn’t have a government. It has a colonial administration.”

Discussing recent news of how Hurricane María has resulted in more than 4,695 deaths in Puerto Rico — with closed schools, homeless cities, a lack of electricity and health care in some areas, and people overall still deeply suffering six months later, Maldonado said, “The Puerto Ricans see how the U.S. doesn’t care.” Maldonado and others in the room wore t-shirts that read “Se Acabaron Promesa” — meaning “End Promesa,” a financial plan imposed on Puerto Rico by U.S. banks during the Barack Obama administration.

Socialist organizers in Puerto Rico work to help provide food and a fightback that has succeeded in exposing privatization schemes, such as plans for charter schools and capitalist plans to take advantage of this time of crisis to cancel Puerto Rican workers’ benefits and rights. The June 9 forum explained how the island used to enjoy a publicly owned utility service and had more of a planned economy approach, in contrast to the direct control of services under Promesa, with private businesses and banks in charge. A fiscal board in Puerto Rico has imposed austerity measures on the people. Jocelyn spoke of how “the new generation of resistance sees the disaster is Puerto Rico’s imposed colonial relationship with the U.S.”

A senior from ProLibertad spoke of the success of their socialist work against the storm difficulties, with more plans to fight further exploitation and the denial of self determination. Socialist organizers have helped lead the disruption of Promesa meetings and at least one San Juan Chamber of Commerce meeting, as well as the shutting down of a pro-capitalist newspaper.

With reference to their 19-year-old socialist movement, Puerto Rican organizers insisted that “resistance is fierce in Puerto Rico!”