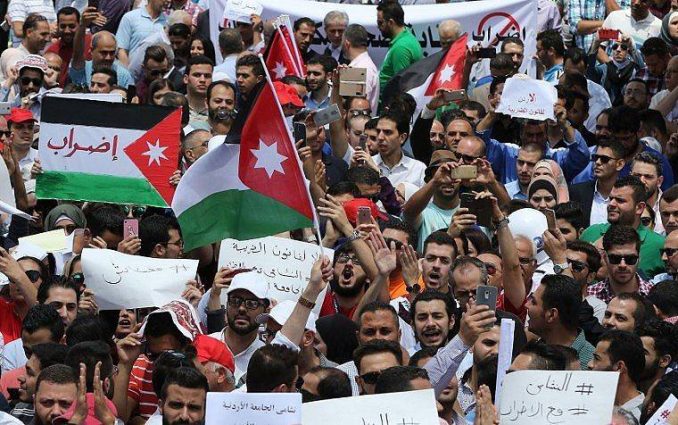 Thousands of Jordanians take to the streets of Amman on May 30, 2018.

Jordanians took to the streets for five days, beginning May 30, to protest measures by the government to increase taxes. Demonstrators also demanded access and improvements to city services, the lack of which compounds the high rate of unemployment to which Jordan’s population is subjected.

In the largest protests the country has seen since 2011, Jordanians unseated Prime Minister Hani Mulki in a matter of days due to popular discontent with staggering austerity, lack of affordability and poverty.

The protests were launched following the announcement of International Monetary Fund measures, which included a new draft, income-based tax law and a sharp tax increase that enraged the widely unemployed and underemployed populace.

The IMF put $723 million into the country ostensibly to lower debt and enhance equitable growth. Yet the inflow has only supported the country’s staggering $35 billion debt service. Jordan joined five other Arab countries — Egypt, Iraq, Morocco, Tunisia and Yemen — in approving IMF loans in August 2016. These austerity agreements are detrimental to social programs and especially antagonistic to the population’s already suffering from devastation wrought by imperialist warfare, high unemployment and rampant corruption.

Like its Arab neighbors, Jordan has become beholden to the debt trap of finance capital, in which capitalism and cronyism by governments and institutions prove accountable to no one other than international banks and bankrollers. These entities buy their way into economic and political dominion over countries and thereby deny their self-determination.

Nations continue to be destabilized by the effects of capitalism, as economic austerity helps fuel social and political instability throughout the Arab world. In Lebanon the ratio of debt to gross domestic product, at 148 percent, is the highest in the Middle East and third highest in the world. It’s the legacy of finance inflows that made their way into the pockets of bourgeois party elites. The 1989 Taif Agreement, a post-civil-war decree signed in Saudi Arabia, instituted sectarianism and reinforced the colonial French legacy of divide and conquer. As a result, Lebanon remains without a decent infrastructure, yet is a favorite of the World Bank and European Union for its continuous acceptance of loans for unsuccessful public-private infrastructure ventures.

Egypt too is no stranger to austerity. It has its own share of IMF loans triggering austerity squeezes, including slashing food and fuel subsidies amid stagnant pay and high poverty. In Tunisia in January, seven years after mass demonstrations toppled dictator Zine El Abidine Ben Ali, 1,000 young activists were arrested after a month of protests against austerity and unemployment. And the Ansarullah in impoverished Yemen forced President Abdrabbuh Mansour Hadi into exile in 2014 for his compliance in enforcing IMF-style austerity. Such neoliberal policies had continued to rob citizens and extinguish any semblance of civil services from the people.

Arab and Muslim governments that don’t neatly comply with international banks are met with hostility. Syria was pressured to adopt neoliberal economic policies over the past few decades — financial policies that failed to assist its large agricultural sector struggling from the aftereffects of a five-year drought. Syria’s refusal to take on IMF loans and its relative independence from foreign debt has made it the target of finance capitalist institutions and U.S.-NATO aggression. Libya’s state-owned bank, nationalization of the economy and plans to implement a pan-African gold standard led to the violent NATO-led toppling of Muammar Gaddafi in 2011.

Between the lavish Gulf and the impoverished nations in the Levant and North Africa, income inequality dominates the Middle East, representing one of the highest disparities seen in any region in the world. The top 10 percent of the population holds more than 67 percent of the region’s wealth. Wealth inequality across Arab nations replicates the class divides within their respective societies. As Gulf Cooperation Council nations rack up wealth, claiming nearly 50 percent of the region’s income despite having only 15 percent of the Arab world’s population, an ascension of instability and unrest threatens to quell reactionary regimes.

The increasingly apparent alliance between the GCC nations, Britain, the U.S. and Israel — the U.S.’s longtime settler colonial outpost in the Middle East — exemplify their steadfast commitment to reinforcing economic and political hegemony. The openly warm relations between the U.S.’s two closest Middle East allies, Israel and Saudi Arabia — which are also Britain’s original neocolonies — and their camaraderie with the U.S. over military aggression and genocide continue to foster austerity among the peoples and lands of Palestine and Yemen, which are kept brutally impoverished and underdeveloped. Worldwide, austerity policies are inextricable from the war economy that is their main perpetrator.

In the interests of imperialism, Western-backed monarchs were placed to guard artificially carved-up states, ensuring that the tools of sectarianism and neocolonial governance would safeguard wealth. Today, this status quo is sustained, yet faces an unprecedented threat from the masses who reject its murderous attacks on the sovereignty of working people worldwide. In the U.S., the cost of warmongering is the crumbling of U.S. infrastructure and institutions, even as it has worked to help tear down the infrastructure of countries abroad.

It is up to the working people across all hemispheres to resist economic and political forces that consign us all to death and destruction.

Kassem is an organizer with U.S. ­Palestinian Community Network-Detroit.