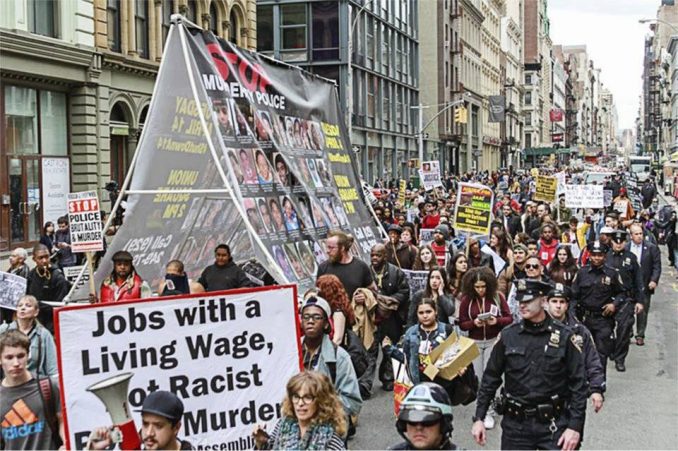 When the Bureau of Labor Statistics released its May monthly employment report, one figure in the jobs report — the official unemployment rate, at 3.8 percent — drew boasting from President Donald Trump, puffery from much of the big-business media and a stock market bump.

These spokespeople for capitalism implied that this report of the lowest unemployment rate since 2000 meant that the capitalist economy was finally on the way to vigorous growth after the Great Recession that began in 2008-2009.

How is it possible, then, that the organizers of the Poor People’s Campaign, which began May 14 and is scheduled to last 40 days, see a need to restart the campaign that Martin Luther King Jr. began 50 years ago? This campaign involves protests and demonstrations throughout the U.S.

According to its national co-chair, the Rev. William Barber, this campaign’s demands are “calling for a higher minimum wage and a repeal of the 2017 federal tax law, ending gerrymandering [of election districts]. It also calls for an expansion of Medicaid in every state and an end to systemic racism, ecological devastation and military aggression, among other things.” (NPR, May 14)

The truth behind the statistics is that low pay, lack of hours and no benefits drive many workers and their families into poverty, and figures for each of these phenomena can be teased out of the full BLS report.

Another, broader figure in the report, which measures the number of people working only part time who want to work full time, and includes discouraged workers — those who have given up looking for work — and workers “marginally attached” to the labor market, was basically ignored by the media. This rate, which the BLS calls the U6 rate, was 7.6 percent. It was 6.9 percent in 2000, when the economy was growing vigorously.

An even more important figure for measuring economic growth is the Labor Force Participation Rate. The LFPR measures the proportion of the adult population that is in the labor market. This rate also decreased in May. That’s not a sign of good times.

The authors of some articles in the big business media say they don’t understand why this 3.8 percent unemployment figure, which they assumed is the equivalent of full employment, hadn’t led to bigger wage hikes for lower-paid workers. Workers on the bottom of the wage scale, who are predominantly people of color and women, have seen only a 2.8 percent increase — barely over inflation — since May 2017. (Whether or not even this small increase is due, at least in part, to the Fight for $15, that is, the struggle to win a higher minimum wage, wasn’t addressed.)

The truth is that the low official unemployment rate doesn’t really mean full employment. And you must also consider some of the legal and political steps big business has taken to keep wages low. These steps include imposing “non-compete” contracts, refusing to raise the legal minimum wage, and turning full-time, permanent jobs into temporary gigs that disguise workers as independent contractors and leave them with no benefits or minimum wages.

The Labor Force Participation Rate is a better measure of economic health. This rate takes the number of people in the labor pool, both employed and unemployed, divided by the working-age population, that is, everyone over 16 who is not in the military or in prisons or in hospitals or nursing homes. Currently the LRPR is 62.7 percent.

Historically, the LFPR was below 60 percent from 1948 until the mid 1960s, when women started to enter the labor force in much greater numbers. The LFPR reached its maximum of 67.3 percent in 2000.

In general, the LFPR has been falling since 2008 and is unlikely to improve. The U.S. population is getting older as the baby boomers retire from the workforce. When these older workers lose their job because of automation or outsourcing to a low-wage area, if their skills don’t match what employers currently require, they either drop out of active job-seeking or are forced to compete for the lowest paying jobs.

In addition, the lack of health care, especially for diseases of poverty like high blood pressure and diabetes, keeps tens of thousands out of the labor pool.

Another reason the LFPR is unlikely to increase is the much greater use of opioid medication. According to economic and business news writer Kimberly Amadeo, “Almost half of prime age men not in the labor force take pain medication daily to treat chronic health conditions.” The opioid epidemic affects about one million people according to recent studies. (­thebalance.com, June 1)

How the bosses keep wages low

The political power of those that control the economy, who also control vast wealth, makes it much more difficult even for union workers to bargain collectively to win higher wages and better working conditions. Better wages for unionized workers in an industry or area has historically also helped raise wages for unorganized workers there, as their bosses have made concessions to keep unions out.

Hundreds of firms have paid billions of dollars in penalties since 2000 for practices such as forcing off-the-clock work and job title misclassifications to avoid paying overtime, as well as overtime, minimum wage, meal break and tip violations. Some 1,200 successful collective actions challenging large companies’ bad behavior have cost top corporations a total of $8.8 billion. (Jobs with Justice, June 2018) But this is just the tip of the iceberg — small violations of labor laws often go uncaught.

There are fewer “company towns” in the United States today. Still, nurses, aides, medical technicians or even doctors in a town where there are only a few hospitals, have to take what wages the owners of these facilities are willing to offer, or move. The same goes for many other dominant industries in small towns.

Some 30 to 40 million workers in the U.S. — including Amazon pickers and minimum-wage sandwich makers — are covered by non-compete contracts which forbid them from going to work for a competitor. (New York Times, June 7) Google, Microsoft, Oracle, IBM and Cisco have no-raid pacts, which keep them from hiring workers who work for their competitors. Even smaller firms than these giants, in areas where the minimum wage has been boosted, refrain from hiring workers from jurisdictions where it hasn’t.

If you are an undocumented worker, all these extortions and exploitations can be used against you without any practical hindrance.

So, when you examine the more telling statistics, like the LFPR, the government report from the Bureau of Labor Statistics, designed to let companies make informed hiring and investment decisions, they confirm many of the charges and complaints made by the Poor People’s Campaign.