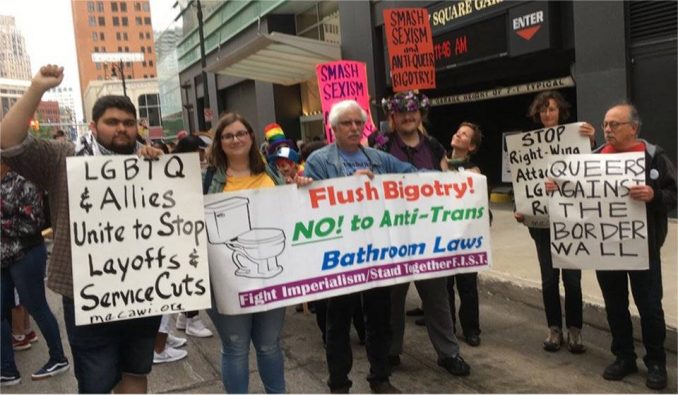 A coalition of comrades and allies marched on June 10 in Detroit in the Motor City Pride parade, an event dominated by the banking and corporate institutions that have ignored and exploited LGBTQ+ people for decades.

In an effort to bring the narrative of queer liberation back to its radical roots, Workers World Party members and others in the struggle engaged with Pride attendees, staffing a booth at the Pride festival on June 9 and 10 and drawing large groups of visitors, despite the remote location we were assigned.

The Detroit WWP branch, which has maintained a presence at Pride for years, connected the struggle for LGBTQ+ rights to the issues of racial and economic inequality nationally and internationally. Members reminded all who heard us that the struggle is not over and invited everyone to a forum on Stonewall the following weekend.

Despite heavy marketing and propaganda at the event, comrades received enthusiastic responses from the queer community. Chants of “Keep your bigotry out of our bakery!” and “We’re here! We’re queer! Immigrants are welcome here!” were met with cheers and applause, with many onlookers joining in.

Despite funding from the banks and companies that are ravaging Detroit, the police presence and even active recruiting, and a clear capitalist message, Motor City Pride retained radical, communist voices like the ones who started the LGBTQ movement nearly 50 years ago.