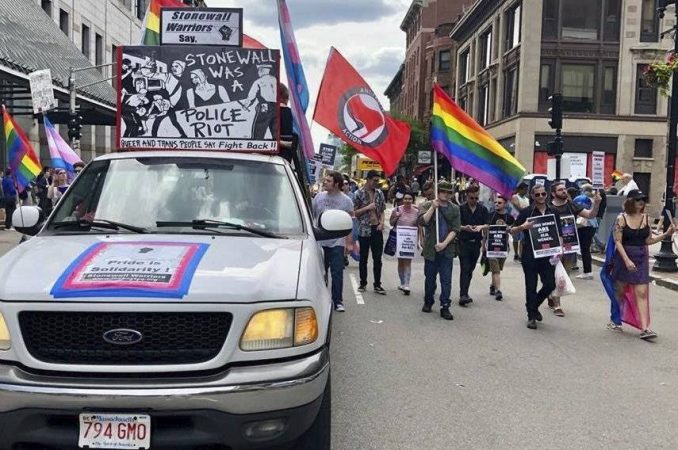 Stonewall Warriors gathered as a contingent for the Boston Pride parade on June 9, joined by activists from United American Indians of New England, Act Up Class War and the Justice for Siham Coalition. Led by trans women in a contingent heavily made up of trans and nonbinary folks, their messaging focused on the anti-worker SESTA/FOSTA bill as well as on a Massachusetts Nov. 8 referendum that would strip rights from transgender people; they totally rejected the narrative that it is simply a “bathroom bill.”

The contingent challenged the repressive state with chants such as “Oink! Oink! Bang! Bang! Every day the same thing!” — which decried the involvement of police and Immigration and Customs Enforcement in Pride. Other chants denounced U.S. imperialism on all fronts. Speakers on the sound truck raised a number of issues, including the death of Roxana Hernández, a migrant trans woman who died in ICE custody from HIV-related complications. They tied fascistic ICE tactics to police killings of Black and Brown people.

Other chants underlined the central points of the contingent, such as “Stop killing trans people!” The contingent expressed LGBTQ solidarity with all oppressed people through chants like “Justice for Puerto Rico! Justice for Palestine!”

As they reached the festival at the end of the march, the contingent continued moving through the crowd, chanting “Stonewall means fight back!” and then held a speakout. Reaffirming the messaging and issues carried in the march, members of the contingent came forward and shared their anger.

Near the front of the parade, No Justice, No Pride Boston, a group of queer and trans people of color, carried out a disruption in front of the Santander Bank contingent to call attention to many of the same issues, including Santander’s exploitation of Puerto Rico and the real death toll of Hurricane María.