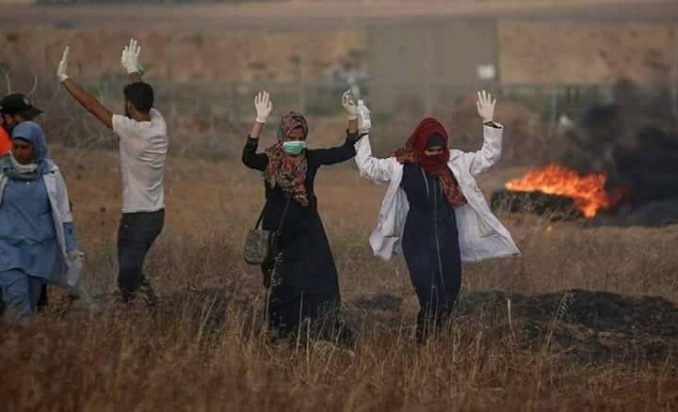 The last photo taken of 21-year-old Palestinian nurse Razan al-Najjar showed her with other medics in white coats and latex gloves, their hands high in the air as they approached to evacuate a protester who had been shot and was bleeding on the ground.

Moments after that photo was taken, Razan’s colleagues would be evacuating her to the hospital where she died.

Following unusual international publicity over her death, the New York Times ran a headline, “A Woman Dedicated to Saving Lives Loses Hers in Gaza Confrontation.” But she didn’t lose her life. It didn’t fall out of her pocket or get misplaced somewhere in a junkyard. An Israeli sniper, a man or woman her age — surely a foreigner to that land as nearly all Jewish Israelis are — put her in a rifle scope.

The soldier focused, took a concentrated breath — Razan’s beautiful face inside the target circle — and made a small pull with an index finger on the trigger that sent a bullet through Razan’s back, where it tumbled through her slight body, pulverized her organs and exited through her chest.

Prior to her murder, Razan had given interviews to the press, most notably one to the New York Times, where she talked about breaking gender barriers, the struggle for freedom and our people’s unbroken will to return to our homes. Those interviews made her known to Israelis, like the other medics and journalists Israel had already killed. As the Israel Defense Forces spokesperson tweeted (and later removed the tweet), Israelis “know where every bullet landed,” and nothing they do is “carried out uncontrolled” — leaving no doubt that Razan’s murder, like the 120 other murders and injuries to over 15,000 Palestinians, was calculated, deliberate slaughter.

There is an endearing photo of Razan with children in the background. She is smiling, her hands together in the shape of a heart, a gesture common among young people around the world. Her hijab is always tidy, with a perfect point in the center where one can see it is held in place with a small pin. She took time in the mirror daily for that small dignity, and my heart breaks everytime I imagine it.

We want nurses and other medical unions everywhere to take a stand for Razan and all her colleagues who risk their lives day in and out under unimaginable conditions to give whatever relief they can to our people, devastated, dismembered and destroyed as they are by the impossible cruelty and codified racism of Israel.