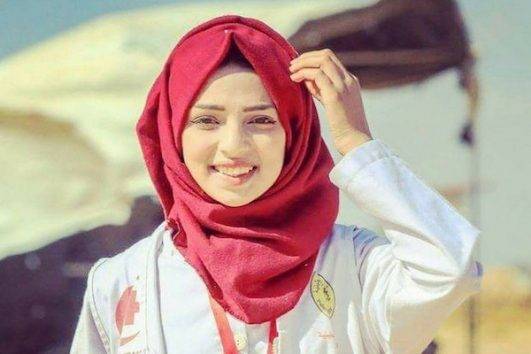 An Israeli soldier murdered Razan al-Najjar on June 1. The sniper shot her in the chest while she was selflessly tending to victims of ongoing Zionist violence in Gaza. The 21-year-old volunteer medic was trying to rescue an elderly injured protester 100 meters from Gaza’s boundary fence, which Israel claims to be defending as a justification for its violent repression of the Great March of Return demonstrations.

Al-Najjar approached the victim with her hands up to show members of the Israeli Defense Forces that she was not a threat. Wearing a uniform, she was clearly identified as a rescue worker.

The following day, thousands attended al-Najjar’s funeral. Her body was wrapped in a Palestinian flag and the bloodstained uniform she was wearing when she was killed. Mourners carried her body along the funeral procession, which stretched for blocks. Hundreds of medical workers and the victim’s father, Ashraf al-Najjar, were among those in the procession.

Al-Najjar is the second medical worker killed by the IDF in Gaza since the start of the demonstrations in late March. During that period, these soldiers injured 223 paramedics and, on May 15, fatally shot medic Moussa Abu Hassanein.

Al-Najjar was among many who had called attention to the IDF’s blatant targeting of medics and journalists. In an interview posted on social media, her urgent message read: “I call on the world to look and see why the Israeli forces are targeting us. We are not doing anything. We are just rescuing injured people and healing their wounds.” (The Middle East Eye, June 2)

There is no more blatant proof of Israel’s ongoing campaign of ethnic cleansing than the intentional murder of clearly identified medics. This is a ruthless tactic meant to maximize the death toll of Palestinians, as is the use of expanding bullets. By targeting journalists, Israel is attempting to cover up the brutality and malicious intent of its military forces. However, Israel has not been successful in covering up its war crimes, and its army’s continued assault has sparked international outrage.

Kuwait introduced a draft resolution to the U.N. Security Council that would have condemned Israel’s murderous acts and provided protection for Palestinians in Gaza and the West Bank. Ten out of 15 member nations voted in favor on June 1, while four abstained. The U.S. was the only country to veto the resolution, which effectively blocked its passage.

In justifying the blatantly undemocratic action against international resolve, Nikki Haley, the U.S. ambassador to the U.N., claimed the measure was “morally bankrupt.” Rather than hold Israel accountable for its actions, she blamed Hamas for the deteriorating conditions in Gaza. Given its central role in enabling and funding Israeli war crimes, Washington is also culpable for the deaths of al-Najjar and hundreds of other Palestinians whose demands for justice have been met with violence and brutality.

The U.S. is impeding international intervention. The IDF, perpetrators of the violence, absurdly state that they will investigate their own actions. In response to the growing world outcry against Israel’s military, the IDF issued a statement claiming that it tries to reduce casualties in the Gaza Strip — and then blamed Hamas for civilian casualties. Like their U.S. counterparts, these Zionist war criminals accuse Hamas of fatally shooting al-Najjar.

The Palestinian people remain resolute, as their struggle for existence requires — despite the U.S.-backed Israeli commitment to ethnic cleansing. After al-Najjar’s funeral, demonstrators returned to confront the IDF at Gaza’s boundary fence. There, many threw stones in defiance of Zionist terror.