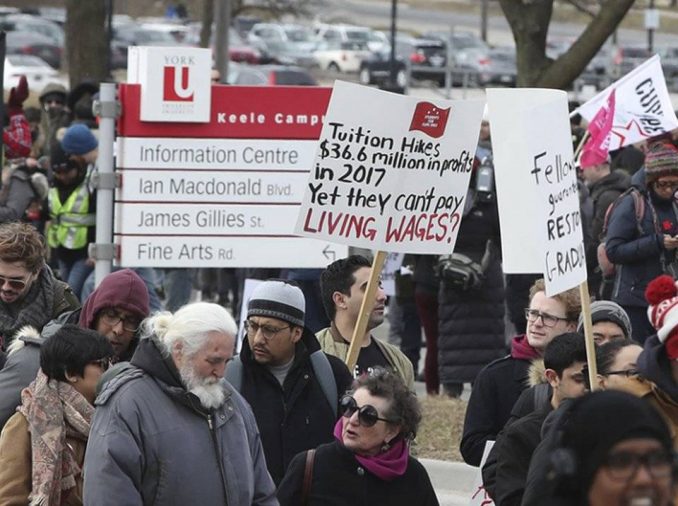 Over 3,000 contract instructors at York University in Toronto, Canada, have been walking picket lines since early March. Their strike affects nearly 50,000 students.

Up to half of all courses offered are taught by contract instructors, the Canadian term for adjuncts. The university administration made a decision to continue as many courses as possible despite the walkout. But being short just one credit can keep a student from graduating.

The Canadian Union of Public Employees 3903, which represents the striking contract instructors and teaching assistants, has charged the York administration with being unwilling to bargain. York’s administration insists on binding arbitration — submitting disputes to a third party that makes a final decision — which the union has rejected. Overwhelming majorities of the union have also voted down contract proposals, which York insisted had to be voted on.

Including the current dispute, York has had five strikes over the last two decades, with both CUPE 3903 and York’s faculty union walking out.

While there is some dispute over pay, this is not the focus. Contract instructors at York make an average of $7,665 Canadian ($5,994 U.S. dollars) a course, according to the Higher Education Quality Council of Ontario. This is much higher than the average adjunct pay at public universities in the United States.

Canadian public employees have the right to strike. What generally happens during a lengthy strike in Ontario, however, is that the provincial legislature passes a bill forcing the workers to return to work. In this case, it is unclear whether such a return-to-work bill would pass, as Ontario’s parliament is currently dissolved because elections are scheduled for early June.

The Canadian corporate media emphasize the problems this strike is causing for York students. They report how students are losing time and money, putting their lives on hold because they can’t finish their degrees. Media propaganda against the strike has so far failed to take hold and the public blames management.

Richard Wellen, YUFA’s president, was quoted as saying: “Without a doubt, these votes reflect a growing sense of frustration with York’s approach to labor relations during the current strike.” He added: “In all my time at York, I have never seen so much public opposition to the administration.”

As shown by video clips on CUPE 3903’s website, student groups marching in support of their teachers have raised the demand for free public higher education.