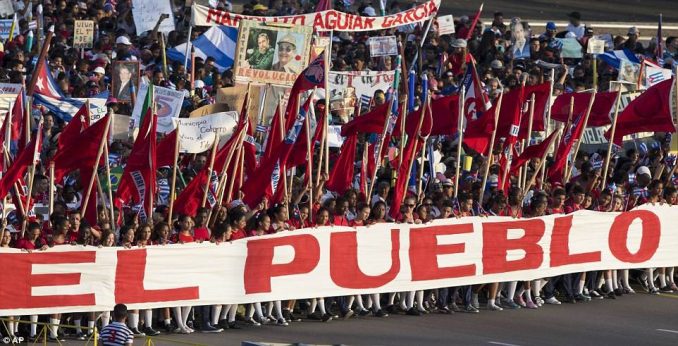 Havana, Cuba, on May Day.

Scarcely one month apart, the U.S. and Cuba each released a review of human rights.

On April 20, the U.S. State Department released its “Country Reports on Human Rights Practices.” This is the U.S. government’s take on human rights in other countries — many of them devastated by U.S.-instigated, regime-change chaos, bombardments or economic sanctions. The report doesn’t mention any of this country’s well-known internal and external human rights violations, pointing only at those in countries it deems foes. The report unsurprisingly singles out Russia, China, the Democratic People’s Republic of Korea and Iran.

Cuba submitted to the U.N. a thorough overview on May 16 documenting its advances in, and defense of, human rights. This is Cuba’s third such review since the 2006 formation of the U.N. Human Rights Council’s country-by-country periodic review.

For nearly 60 years, the U.S. has violated the human rights of the Cuban people, including through the ongoing genocidal U.S. economic, commercial and financial blockade of Cuba. Since 1992, the majority of the globe’s countries have opposed this violation of Cuba’s rights through U.N. General Assembly votes. In 2017 the vote was 191 to 2, with only the U.S. and Israel supporting the blockade.

What Cuba’s recent report to the U.N. shows is that socialism, even in an underdeveloped and blockaded country, can deliver what capitalism only promises.

In the report’s introduction Cuban Foreign Minister Bruno Rodriguez Parilla emphasizes how far Cuba’s socialist revolution has come in just 60 years. He contrasts living conditions today to those endured from 1898 until 1959, the year the Cuban Revolution toppled the U.S.-backed Batista dictatorship:

“From the time of the U.S. military occupation, which severed our independence, under the governments it imposed, 45 percent of children did not attend schools; 85 percent of the people lacked running water; farmers lived in abject poverty without ever owning the land they tilled and immigrants were brutally exploited.

“In Cuba, workers and farmers had no rights. Extrajudicial execution, enforced disappearances and torture were recurrent. Discrimination based on the color of the skin was brutal; poverty was rampant; and women and girls were even more excluded. The dignity of Cubans was tarnished and Cuba’s national culture was trampled upon.

“The Cuban Revolution led by Commander in Chief Fidel Castro Ruz transformed that reality and continues to strive to improve the quality of life, wellbeing and social justice for all of our people, thus implementing all human rights.

“That willingness to protect human dignity, provide equal opportunities and ‘conquer all the justice’ has remained unchanged and unswerving until today.” (www.minrex.gob.cu)

A look at how human rights are defended and implemented in Cuba reveals how thoroughly U.S. capitalist propaganda trumpets “human rights” as a politically loaded code phrase, usually as a pretext for U.S. domination, intervention and aggression.

The State Department’s report claims that the U.S. “promotes and defends” the inalienable rights with which every person is endowed. However, these rights are defined under capitalist legal systems.

As the great novelist and master of irony Anatole France once wrote: “The law, in all its majestic equality, forbids the rich as well as the poor to sleep under bridges, to beg in the streets, and to steal bread.” Now, of course, according to the U.S. Supreme Court’s 2010 Citizens United ruling, corporations have those “inalienable” rights, too.

In contrast, the recent election of the new Cuban President Miguel Diaz-Canel Bermudez demonstrated that an election process without capitalist domination is not only possible, but profoundly democratic.

There was input and institutional representation from all of Cuban society — unions, small farmers, women, students. There were no advertisements or campaign contributions, no special status awarded to those elected. What they receive is extra work at the same pay as their regular job, with accountability to their mobilized constituency.

What about the right to a free education and universal, quality health care or to be secure in your home without fear that a landlord or bank will evict you? Those are not rights under capitalism, where getting so many of life’s necessities depends on the ability to pay, to have to scramble and fight for them.

But free education and universal health care are rights in Cuba, guaranteed and accessed by all — as is the right to vote. There are no gerrymandering or confusing voter registration issues to restrict access to the ballot in Cuba. Everyone is automatically registered when they become 16 years old.

Even after hundreds of years of colonial exploitation and slavery, followed by decades of U.S. domination, Cuba’s human rights achievements in the last 60 years are noteworthy. Yet the Cubans themselves say they are not perfect and have much more to strive for and achieve.

In the report Cuban Foreign Minister Rodriguez Parilla writes: “The strengthening of the economic, commercial and financial blockade imposed by the United States against Cuba, and its extraterritorial implementation, causes deprivations and continues to be the main obstacle to the economic and social development of the country.”

Tragically illustrating his point was the May 18 crash of the Boeing 737 aircraft at Havana’s Jose Marti International Airport. The ongoing U.S. blockade is without a doubt responsible for the loss of the 111 lives.

Because of the blockade, Cuba is barred from directly buying anything made by a U.S. corporation or containing U.S.-owned or made components. To obtain what is needed for national transportation, Cuba must go through third parties to lease aircraft. Not only is this at great additional expense, but it also means that Cuba does not have ultimate control over engineering or safety aspects.

This recent tragedy is yet another example of how the U.S. blockade of Cuba is more than unjust — it is deadly. It’s another reason for people in the U.S. to raise our voices and demand the end of the U.S. blockade.