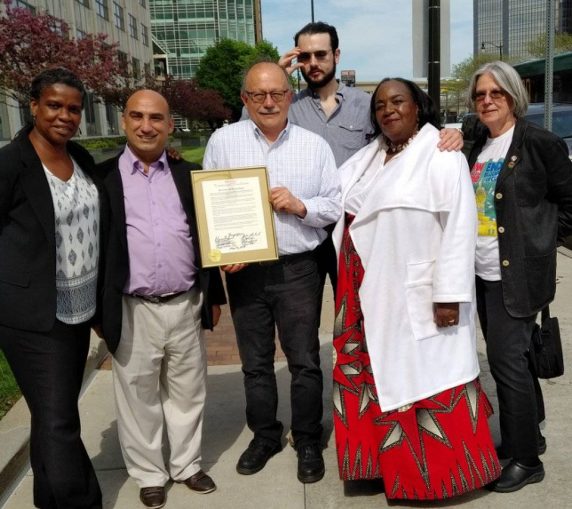 Detroit — The Rev. Joel Ortega Dopico, president of the Cuban Council of Churches, and Gail Walker, executive director of the Interreligious Foundation for Community Organization/Pastors for Peace, met with political and religious leaders here on May 15.

IFCO has been a progressive voice in the religious community for 50 years. In 1988, its founding director, the late Rev. Lucius Walker Jr., founded Pastors for Peace a day after Walker survived a first-hand terrorist attack by Nicaraguan contra forces.

Pastors for Peace Friendship Caravans began in 1992 to confront the U.S. blockade of Cuba, educating U.S. grassroots communities about the brutality of U.S. policy through action. Now, that work is continued by Walker’s daughter, Gail, who arranged for Rev. Ortega Dopico to come to the U.S. and visit with religious communities across the country.

Rev. Ortega Dopico was born in 1971 in Cárdenas City in the province of Matanzas, Cuba. He studied at the Evangelical Theological Seminary of Matanzas and became a Presbyterian pastor in 1997. From 2004 until 2012, he served as head of the seminary.

He became vice president of the Cuban Council of Churches in 2008 and its president in 2018, playing an important role in the steps toward normal relations between the U.S. and Cuba.

Rev. Ortega Dopico spoke at a meeting of the Council of Baptist Ministers of Detroit at the invitation of Bishop Larry London. There, he rubbed shoulders with Democratic hopefuls seeking the endorsement of the influential ministers. Rev. Ortega Dopico made sure that both politicians and preachers heard his message of social and economic liberation.

Later, at City Hall, Gail Walker and Rev. Ortega Dopico met with the Rev. Horace Sheffield Jr. and his daughter, Detroit City Council President Pro Tempore Mary Sheffield, who, with her staff, presented a declaration from the City Council to the visitors. Also attending were former council member the Rev. JoAnn Watson and Felix Sharpe, former director of the Michigan Department of Behavioral Health. At the meeting the benefits for both Cuba and Detroit of lifting the U.S. blockade of Cuba were discussed. ­Council member Sheffield agreed to work with U.S. graduates from the Latin American School of Medicine (ELAM) and Doctors4Detroit about encouraging young Detroiters to apply to Cuba’s free medical school.

The last stop on the tour was a public meeting at St. Matthew’s and St. Joseph’s Episcopal Church, where Father Kenneth Near introduced Rev. Ortega Dopico to a crowd of Detroit activists. The pastor gave a speech addressing local conditions, testifying that the only solution to the problems plaguing Detroit is Cuban-style socialism. To him, the Christian message is inseparable from the message of national and economic liberation. (See the full speech at tinyurl.com/yca46lex/.)

IFCO/Pastors for Peace will be returning to Detroit in June as part of their annual Friendship Caravan to Cuba, which activists from Detroit and Grand Rapids will be joining. Gail Walker will speak and “Dare to Dream,” a documentary about U.S. students at ELAM, will be shown on June 29 at 7 p.m. at the Horace L. Sheffield Jr. Center, 12048 Grand River, Detroit.