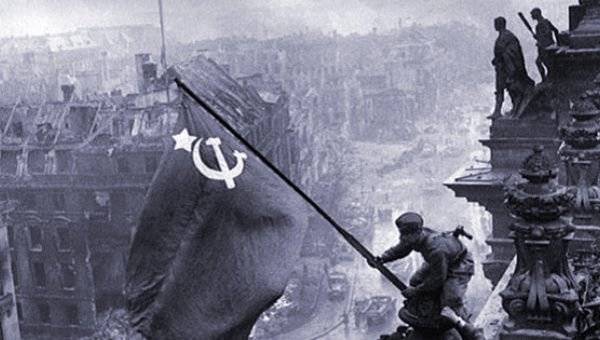 Soviet Red Army soldiers raise the flag on the roof of the Reichstag building in Berlin, May 1945.

Seattle — For the third year in a row, at least 500 marchers took to the streets here on May 6 to celebrate the anniversary of the Soviet Union’s defeat of Nazi Germany on May 9, 1945.

The event started with a rally at which Soviet war veterans spoke about the need to remember the contributions of the 27 million Soviet citizens killed in the war and the country’s heroic resistance to German fascism. They then walked through the crowd alongside old Soviet GAZ-67s (jeep-type vehicles), receiving red carnations along the way. Over half the crowd held photos of their ancestors with the words “World War 2 Hero.”

The song “The Sacred War” played as a woman dressed in a Soviet officer’s uniform called out the battle cry “Ura, tovarishchi!” through a megaphone and the crowd responded “Ura.”

Members of Workers World Party in Federal Way, Wash., marched near the front of the crowd with a line of Soviet hammer-and-sickle flags to pay tribute to the socialist struggle against fascism. The crowd sang iconic wartime songs like “Katyusha” and “The Red Army Is the Strongest.”

The march came to an end at Seattle Center, next to the Space Needle, where people gathered, took photos and thanked the war heroes. A concert featured traditional Russian folk music and dances.

Victory Day in Seattle showed the feelings of pride and sorrow with which Russian-Americans remember the sacrifices made by their families in defeating the fascist threat. It also combated the liberal narrative and fearmongering that establishment politicians in both the Democratic and Republican parties are trying to build against Russia and Russian-Americans.

One example of this hostile environment came on March 26 when the Trump administration expelled 60 Russian diplomats and closed the Russian Consulate in Seattle.