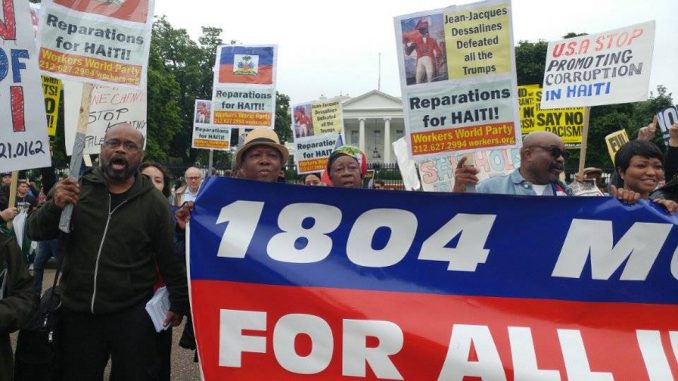 Gross insults and threats of deportation have inflamed the Haitian community.

Washington, D.C. — Haitians and their supporters rallied in front of the White House on May 19 to protest Trump’s racism and deportations, despite a Secret Service attempt to shut the rally down.

The protest in Washington’s Lafayette Park was called by the 1804 Movement for All Immigrants, a coalition of many different organizations and individuals. 1804 refers to the year Haiti declared independence.

The Trump administration is stripping temporary protected status (TPS) from hundreds of thousands of immigrants who have fled disasters in Haiti, El Salvador, Honduras, Nepal, Nicaragua and Sudan. Mass deportations are threatened.

On Jan. 11, the eve of the eighth anniversary of the devastating Haitian earthquake, Trump, in a burst of disgusting imperialist malice, referred to Haiti, El Salvador and some African nations as “shithole” countries.

The 1804 coalition was immediately organized and called a demonstration in New York City on Jan. 19. Despite the freezing weather, more than a thousand people marched across the Brooklyn Bridge to a Trump building on Wall Street.

Among the demands of the 1804 coalition are that Trump apologize to the countries he so grossly insulted; permanent residency for all TPS holders; U.S. and U.N. reparations to Haiti; and a stop to police terror against Black and Brown communities. The coalition also denounced the U.S., Israeli and Saudi war and aggression against Iran and Syria.

Buses came to the Washington rally from both Brooklyn and New Jersey. Co-chairing the rally were Ray Laforest, a union organizer, and Kerbie Joseph from the Party for Socialism and Liberation.

Speaking across from the White House built by enslaved people, Marie Paule Florestal challenged Trump’s racism and bigotry. Florestal, a teacher and union activist, was a key organizer of the event.

Other speakers included longtime Haitian activists Florence Jean-Joseph and Georgette Delinois, as well as a representative of the United African Congress and Kim Ives of Haïtí Liberté newspaper.

Eugene Puryear of PSL described how Haitians not only fought for their own liberation from slavery, but also aided Simón Bolívar to liberate much of Latin America.

Calling Trump “just a human toilet spewing hate,” Lee Patterson from Workers World Party-Baltimore demanded freedom for political prisoner Mumia Abu-Jamal. He pointed out that the rally was being held on “the birthday of the great revolutionary leader Malcolm X — assassinated by COINTELPRO and the CIA.”

Even though the 1804 coalition had a permit, Secret Service agents cleared Lafayette Park toward the end of the rally, suppressing the group’s First Amendment rights.

The power of the people forced the park to be reopened and the rally resumed. Berthony Dupont, editor of Haïtí Liberté, was the final speaker.

Stop the deportations! Reparations for Haiti!