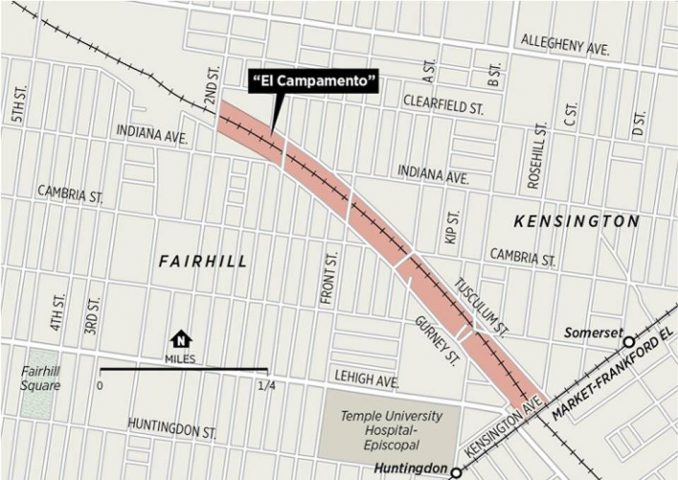 The U.S. opioid epidemic doesn’t just take over lives. It takes over neighborhoods, as the Kensington section of Philadelphia can attest. The area has become a magnet for opioid addicts up and down the East Coast because of its potent heroin and now fentanyl.

A mark of this epidemic — compounded by unfair evictions and gentrification pricing people out of their homes — has been camps of heroin and other drug users along railroad tracks and under bridges. These camps act as homes, safe injection sites and gathering places for the homeless, addicted and downtrodden of the city.

Along with homeless people who gather at those locations, many Delaware Valley drug addicts congregate around the camps, making it easier for groups like Angels in Motion to provide them with basic necessities like food and water. The camps also make it easier to search for missing Delaware Valley addicts. Many times they can be found there.

The city posted notices at camps on April 30 giving one month for residents to leave. Why is Philadelphia so interested in eliminating these camps? On paper, it’s all about public health. The needles, empty baggies and other drug paraphernalia strewn about are a serious problem that needs to be addressed. Yet camp residents ask why this can’t be addressed without throwing them out of the only “home” they have.

Many question the timing and real purpose behind the evictions. Philadelphia last evicted people from a homeless camp in 2017 when they attacked El Campamento, located along Conrail tracks in the city’s Fairhill area. When everyone was evicted and the camp cleared, a developer announced plans to turn the area into luxury condos.

Is gentrification again propelling Philadelphia officials’ sudden concern about drugs? Within walking distance of the camps are luxury suites with rent up to $1,500 a month. The problem will only get worse as more condos are built and more “blighted” properties are flipped.

These camps are more important than people realize. They serve as a home of sorts for those who must eke out an existence working odd jobs or begging to support their addictions and their lives. People don’t have homes to return to, but they have the camps, where they watch out for each other’s things and for the most part care for each other. They have developed a comradeship worth respecting. If the camps are destroyed, all of that is destroyed.

But what does comradeship among drug addicts mean? It means that we stay alive another day. In general, it was drug users who pioneered harm reduction, allowing people to use drugs with less of a chance of dying due to addiction.

The camps offer safety. When a bad batch of heroin turns up hot with fentanyl, people warn each other.

The camps also provide a place to administer Narcan to people who overdose. This won’t save everyone, yet it means that some may live another day. That next day might be the day they decide to turn away from drugs and get help.

Meanwhile, the city’s proposed safe injection site, not fully planned out and with no timeline for when it might open, is already facing opposition. The city government is again promising to house and treat addicts from the camps, but people aren’t falling for that again. When they attacked El Campamento last year, there weren’t enough treatment or respite beds for people displaced from the camp.

The 80 respite beds available in the city are already filled with people seeking help. If the planned May 30 eviction takes place, 187 more people will need help. Even now, people looking for a bed are being turned down for treatment, despite the city paying Community Behavioral Health billions for it.

People have called protests against the city’s planned evictions on May 29 from 6 to 8 p.m. and May 30 from 8 to 10 a.m. Demands include halting the evictions; making CBH explain how they’ve spent money received for addiction treatment; having the city open up more respite beds; and getting CBH to allow more people to enter treatment.

Until the city can provide real resident and treatment alternatives, the camps must be defended. The camps are populated by people so beaten down by capitalism that they turn to a life of drugged fantasy. They don’t want to be there, but they can’t imagine having lives that won’t lead them back to that place.

We have to defeat the attacks on the camp and defeat the gentrifying forces pushing more people out onto the streets. This is true not just in Kensington, but from coast to coast. Defend your local homeless camps, bring people the supplies they need to survive, and show them that they’re in the position they’re in because capitalism is at a dead end.