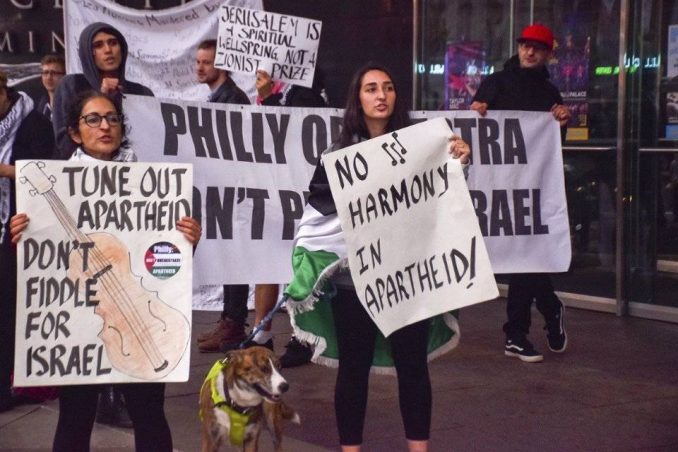 The orchestra’s trip to Israel is meant to put a liberal veneer on Israeli apartheid and oppression of Palestinians.

Pro-Palestinian activists who, since April 6, have staged weekly demonstrations denouncing the Philadelphia Philharmonic Orchestra’s plans to tour Israel upped the ante on May 19. They blocked traffic outside and disrupted the performance inside the Kimmel Center.

Over 100 demonstrators rallied and distributed fliers to orchestra patrons and passersby, addressing the massacres committed by Israeli Defense Forces, who have murdered over 111 unarmed Palestinian protesters in Gaza since March 30 and intentionally injured over 12,000 more. Concert goers were encouraged to hold up the back page of the leaflet, reading “Cancel the trip to Israel!” during the concert.

Many people entering the building gave the protesters a thumbs up. Rally organizers asked patrons to take selfies of themselves holding the protest sign during the performance. Two stops on the planned itinerary include orchestra members performing with Israeli soldiers at IDF bases.

Earlier actions by Philly Don’t Orchestrate Apartheid resulted in the removal of a planned visit with Miri Regev, Israeli minister of Culture and Sport, who had likened African asylum seekers to “a cancer,” then later apologized to cancer survivors for the association with Black people. She also posted a video of herself with Israeli soccer fans as they shouted genocidal chants at Palestinians.

Midway through the protests, about 60 demonstrators took over South Broad Street, fully blocking it for a while. Even after police cleared one lane, demonstrators continued to block southbound traffic throughout the rest of the protest. They held a 75-foot-long scroll with pictures, names and ages of dozens of Palestinians, including an 8-month-old child, murdered since March 30. Several activists staged a “die-in,” lying on the street, while others chalked body images on the sidewalk outside the center.

While police and Kimmel Center management focused on the protests outside, two activists entered the hall and disrupted the orchestra’s performance shortly after it began. In the brief silence between the initial applause and music director Yannick Nézet-Séguin raising his baton, a pre-recorded message from Palestinian activist Susan Abulhawa suddenly filled the auditorium, broadcast via a powerful portable speaker.

“Israel has shot over 12,000 human beings. Do you have any idea what 12,000 mangled bodies looks like, or what 60 murdered in a single day looks like? Every one of them had a life. They had family and people who loved them. You are complicit in this carnage. Every one of you going to play in celebration of Israel is complicit.

“Music does not exempt you from moral responsibility. Music ought to be a moral compass toward justice, not a way to cozy up to power and money. We Palestinians didn’t ask you to fight for us. All we asked is that you do no harm, that you don’t whitewash Israeli apartheid. If you think your collaboration with that murderous gangster state will blow over, then you sorely underestimate our pain; you underestimate our love for each other and our anger and resolve.”

One protester who got inside reported that Nézet-Séguin then put his fingers in his ears, saying “la-la-la-la.” The demonstrator who played the recording was escorted from the hall, but another stood to denounce the tour. Nézet-Séguin then slammed his baton on the podium and walked off the stage. As chants from outside of “Free, free Palestine!” could be heard, some musicians also began to leave, most likely expecting other disruptions. Video of the action can be found at vimeo.com/270993383.

Orchestra co-president Matthew Loden then told the audience that while dissent matters, “The sanctity of the concert hall should be respected.” (philly.com, May 19). But by agreeing to participate in a whitewashing tour of the racist, apartheid state of Israel, financed by the Jewish Federation of Greater Philadelphia, a longtime proponent of Israeli Zionism, the orchestra no longer deserves respect.

Coverage of the action appeared online in the Philadelphia Inquirer, but Joe Piette, who handles media outreach for the PDOA coalition, noted that during seven weeks of actions, not one television station covered the boycott campaign. “These actions are linked to the brutal massacres weekly being carried out by Israeli soldiers, which is world news, yet not one local TV outlet saw fit to cover it.”

As the protest continued outside, African National Congress representative Godfrey Sithole voiced the ANC’s consistent support for the Palestinian people struggling against Israeli occupation and apartheid. He reminded the crowd that campaigns like this succeeded in defeating apartheid in South Africa.

Abulhawa concluded the rally by expressing appreciation for the support of progressive African and Latin American nations for the Palestinian cause. She urged continued solidarity for struggles against white supremacy and state brutality, whether in Jerusalem or Philadelphia.

Activists gave notice they will continue calling out the outrageous refusal of the Philadelphia Orchestra to respect the global cultural boycott of Israel when it returns home. Iftar food was then served to those wishing to break their Ramadan fast together. For more information, visit phillydontorchestrateapartheid on ­Facebook.