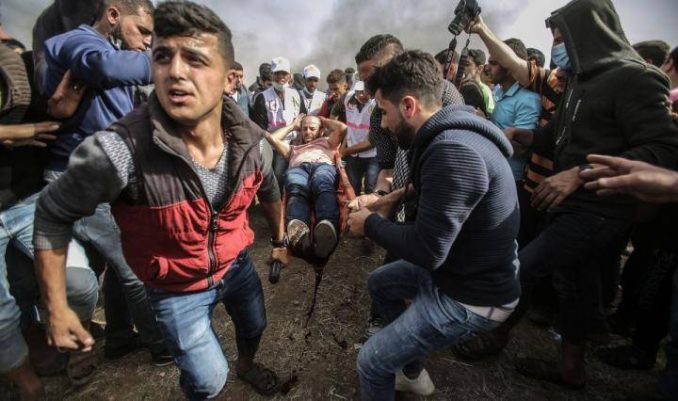 Two side-by-side photos from May 14 were splashed across the front pages of newspapers around the globe and all forms of social media.

One showed Ivanka Trump, daughter of the U.S. president, unveiling a plaque at the newly opened U.S. Embassy in Jerusalem. Present were a champagne-glass-clinking gaggle of right-wing Israeli politicians, U.S. officials and fanatical Christian evangelicals. The last group explained the move to Jerusalem as the glorious prelude to the “second coming,” when all non-Christians — Jews included — will be annihilated and then consigned to eternal damnation.

The medieval Inquisition had nothing on these guys.

At least 62 Gazans were killed on May 14 — one day before the anniversary of the Nakba, or the Catastrophe, when Palestinians were forcibly expelled from their homes by Zionist forces in 1948. The dead this time included six children and an eight-month-old baby named Layla Ghaben. More than 2,700 Palestinians have been wounded, half from sniper fire, since the protests began in Gaza on March 30, according to the Palestinian Health Ministry.

In moving the embassy to Jerusalem, the strategists for U.S. imperialism are far more interested in profits than they are in theology. They are somewhat leery of openly endorsing Israeli atrocities, which have sparked objections among some organs of the corporate media. A May 14 editorial in the New York Times opined: “Mr. Trump’s announcement that he was recognizing Jerusalem as Israel’s capital, and moving the embassy from Tel Aviv, swept aside 70 years of American neutrality.” It added that Israeli officials “are unconvincing when they argue that only live ammunition — rather than tear gas, water cannons and other nonlethal measures — can protect Israel from being overrun.”

Of course, Washington has never been “neutral” toward Israel. As of five years ago, it gave the settler state more than $234 billion in aid, mostly military aid to purchase U.S. weapons, thus arming Israel to the teeth while at the same time filling the coffers of the U.S. war machine. (Haaretz, March 20, 2013) Democratic and Republican politicians are unified behind their support of Israel. Nearly all repeat the Zionist argument that the brutal killing of unarmed protesters in Gaza is necessary so that the racist settler state “can protect its borders.”

Black Agenda Report points out: “No fewer than 24 states have enacted bipartisan legislation to publicly identify and blacklist individuals or corporations that do business with individuals and entities publicly identified as BDS-friendly [the Boycott, Divestment, Sanctions movement]. Similar legislation has been introduced in a dozen more states and in the U.S. Senate. Israel trains thousands of U.S. police each year for hundreds of local departments — from big cities, universities and state cop shops to small towns and rural counties. It’s no wonder that U.S. corporate news media portrayed the latest Israeli massacre as a bizarre act of self-defense at Israel’s borders, as though the gun line around the world’s largest concentration camp, population 2 million, were an international frontier.” (May 17)

But now, the Trump regime has dropped any pretense of total support for Israeli atrocities by moving its embassy to Jerusalem and cancelling the Iran treaty. It is hoping that brute force will break any resistance to U.S. imperialism’s exploitation of the vast wealth in the region.

The Netanyahu government had chimed in its support for the Pentagon on April 30 by launching a massive missile attack against Syria. The Assad government’s “crime”? Enlisting Iranian support against U.S.-backed rebels trying to carry out regime change in Syria.

Around the world, voices loud and clear supported the Palestinian people. From New York to Cape Town; from Albany, N.Y., to Detroit; from Brussels to Halifax, thousands marched in protest of the Israeli atrocities and Trump’s complicit support.

Young Jews from the group IfNotNow blocked traffic in front of the Trump International Hotel in Washington, D.C., for two hours on May 14 as they erected an “Embassy of Freedom” to protest the embassy move. Rebecca Hornstein, a rabbinical school student from Philadelphia, said, “Moving the U.S. Embassy to Jerusalem puts the U.S. stamp of approval on the ongoing evictions and dispossession of Palestinians in East Jerusalem and the ongoing violence directed at Palestinians in Gaza and the West Bank — all of which are counter to Jewish values.” (mondoweiss.net, May 14)

In Israel itself, more than 600 protesters blocked the roads in the center of Tel Aviv for more than two hours. “Artwork created by some students at the Bezalel Academy of Arts and Design in Jerusalem was banned from being displayed at an international science conference by an Israeli minister after the students showed support for Palestinian protesters killed on the Gaza border.” (Newsweek, May 17)

Other governments denounced both the embassy move and the Gaza atrocities. South Africa, with the infamous apartheid regime’s 1960 Sharpeville Massacre burned into its memory, removed its ambassador to Israel. The autocratic Erdogan government in Turkey, which Trump has showered with praise, withdrew its ambassadors from both Israel and the U.S. Even the brutal Saudi Arabian monarchy, immersed in a devastating Pentagon-supported war against the people of Yemen, denounced Trump’s embassy move and Israeli attacks.

Trump and Netanyahu are counting on the storm of worldwide protest dying down in short order so they will be able to carry out their lethal program of conquest and oppression. We must not let that happen.