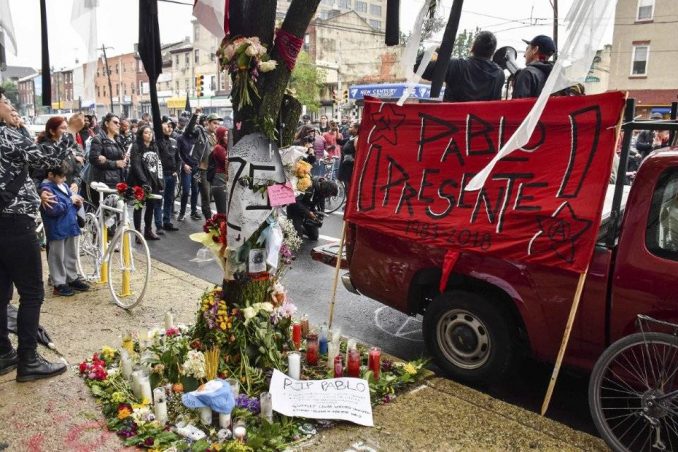 Memorial for Pablo Avenando, run over on his bike while delivering food.

Philadelphia — About two hundred friends, co-workers and family members rallied here on May 19 to celebrate the life of Pablo Avendano. Despite persistent rain, speakers climbed onto a pickup truck parked near the site where he was killed at 10th Street and Spring Garden. They talked about why he was so loved in Philadelphia’s progressive activist community.

Avendano, 34, was riding a bike for food-delivery service Caviar on May 12 when he was struck by a car and then run over by another one during a heavy evening rainstorm. Pablo worked full time for Sparrow, a courier service, but was also working a night shift at Caviar to help make ends meet.

While some media and newspaper articles have made this tragedy into an issue about the need for protected bicycle lanes in the most-biked city in the U.S., others have raised the gig economy as the real cause of the Argentine immigrant’s death.

Avendano was one of millions of workers earning a substandard income from precarious employment. Trapped in a vicious circle, they are forced to moonlight using Uber, rent out their homes via Airbnb, or deliver food and other commodities using their own cars, bikes or homes in order to make ends meet.

Most of the new jobs that President Trump brags he’s been creating are “gig,” precarious or “sharing” jobs, which do not provide livable wages. Even though the companies might employ thousands of these workers, they are not entitled to weekly wages and benefits or covered by safety and other regulations. On the books of accountants and government regulators, they are treated as “independent contractors” and are forced to accept piecework, low wages and few benefits in often dangerous conditions while wealthy executives and owners profit handsomely.

When it’s raining, freezing or otherwise too dangerous to be on the roads is when many people are ordering food deliveries. Because fewer cyclists are willing to make deliveries at these times, Caviar gives pay incentives. Avendano worked in dark, wet conditions on May 12, hoping to take advantage of the higher pay per delivery.

Avendano’s comrades are demanding that Caviar pay for all travel and funeral expenses for his family; reclassify riders as employees, not independent contractors; pay its workers a living wage, starting at $20 an hour with health benefits, hazard pay and bike repair-and-maintenance reimbursement; and respect the workers’ right to organize a union.

Avendano’s partner, Anna Marie Drolet, told the gathering: “Pablo cared about what was happening in the world. He died because he was bringing food to people with money who were too lazy to go out to get their own.”

Area activist George Ciccariello-Maher said, “Pablo was a wage slave who died because the rich make more money by not paying higher wages and benefits. He was nothing to them.”

Friends have set up a fundraiser to help pay his death expenses at gofundme.com/all-out-for-pablito.

A press release signed by “Comrades and friends of Pablo Avendano” ends with: “Pablo was a lover of life, and a passionate fighter for workers’ rights as well as racial and economic equality. We honor his memory by upholding his commitment to making the world a better place by taking up his struggle as our own.”