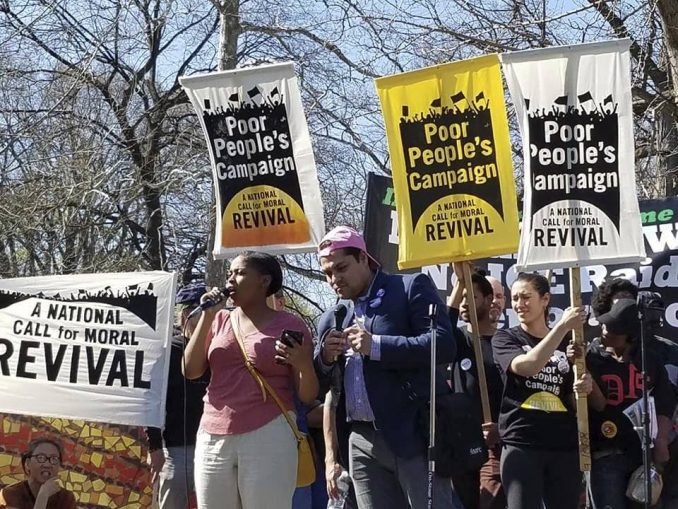 The Poor People’s Campaign: A National Call for Moral Revival, initiated by the Rev. William J. Barber II from North Carolina, kicks off on May 14. On that date, and on the following five Mondays, activists in 32 states will descend on their state capitals for Days of Action with mass rallies and civil disobedience.

Each Monday’s action will focus on a different aspect of the war on the workers and the poor. The themes for the Days of Action are:

In Michigan, different organizations are assuming responsibility for organizing a particular Day of Action. For example, the Moratorium Now! Coalition is pulling together groups to organize events on June 11 for “Everybody’s got the right to live.”

An important aspect of the Poor People’s Campaign has been the use of people’s culture to advance the struggle. In Michigan, weekly meetings of the Art Is Resistance Committee have taken place, with musicians, poets and other cultural workers bringing their contributions to the struggle.

The Poor People’s Campaign has published a comprehensive list of demands in its “Declaration of Fundamental Rights and Poor People’s Moral Agenda.” These include the right to a job at a living wage; defense of unions; an end to all welfare cuts; and guarantee of the right to housing for all.

The program is anti-racist and encompasses the rights of im/migrants, women, the LGBTQ community and people with disabilities. It is against war and militarism and for using Pentagon funds for human needs.

The declaration calls for expansion of Medicaid and Medicare until national health care is achieved. It avows that education is a right and calls for free tuition at colleges and universities and cancellation of all student debt.

For more information on the Poor ­People’s Campaign and to join the actions in your state, go to poorpeoplescampaign.org.